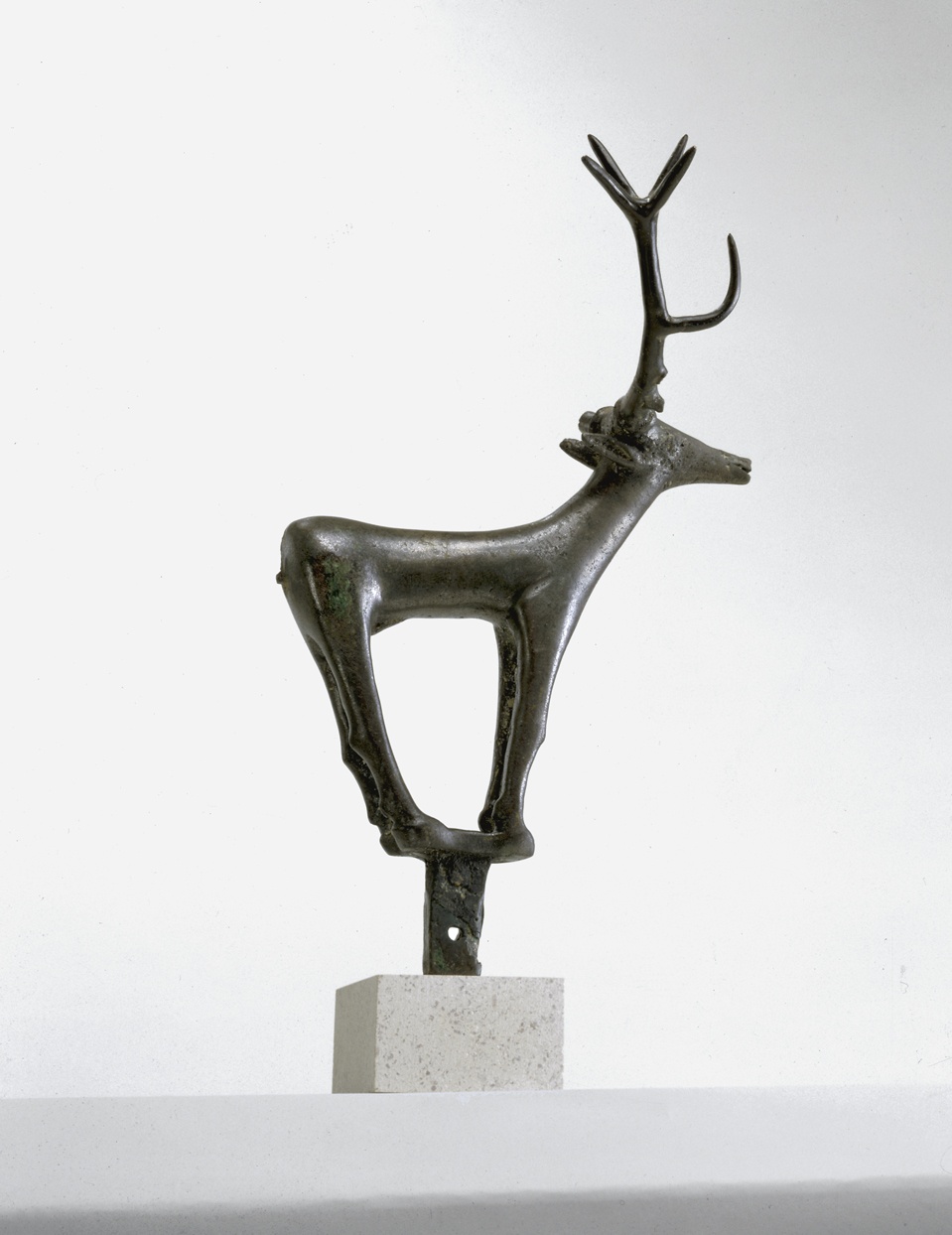 Solid-cast by the lost wax process in heavily leaded bronze. The antlers possibly made separately. Chiselled, hammered in the cold and most of the surface filed and highly burnished. The ankle of the left hind leg and the tang for affixing annealed to correct casting deficiencies.

Condition: patina a silver grey with dullish yellow metal showing through in places; a patch of green on right haunch.

Left antler missing after the first point; right antler broken and reaffixed, originally carrying seven points, of which two are lost; casting fault above the missing tail; a few pits and nicks.

This emblem of cult or power could have been affixed to a staff, standard or canopy pole or on a chariot.

The obvious comparisons are the finials found in the
excavations of Alaca Höyük, as for instance, a stag of about 20.5 cm in height, in Ankara [1], also with fourteen points, less linear in modelling.

There is a very good parallel in a silver bull with gold inlays in the British Museum [2] , probably from Alaca Höyük and also to be dated c. 2300 B.C. Though these belong to different species, the similarity is striking, especially with respect to the plastic flow of the body and the tang.

The stag seems to be of the red deer species, cervus elaphus, and the antlers indicate that he is about fifteen years of age.

One should note, however, that other examples also have fourteen points, and there is one that even appears to have sixteen points.

The conclusion is obvious: the old stag is the one who carries magnificent antlers and his representation is the embodiment of great prestige, somewhat in the similar spirit that certain pendants in Polynesia were worn by the arii as the embodiment of mana [3].

2 British Museum WA 135 851: Kosay, H.Z.: Ausgrabungen von Alaca Höyük (Ankara, 1944), pl. CXII. We are indebted to Dr. J.E. Curtis who kindly answered our query with a complete bibliography for their silver bull and added : "... probably from Alaca Huyuk ... it is probably the same date as your piece, perhaps as early as 2500 BC."