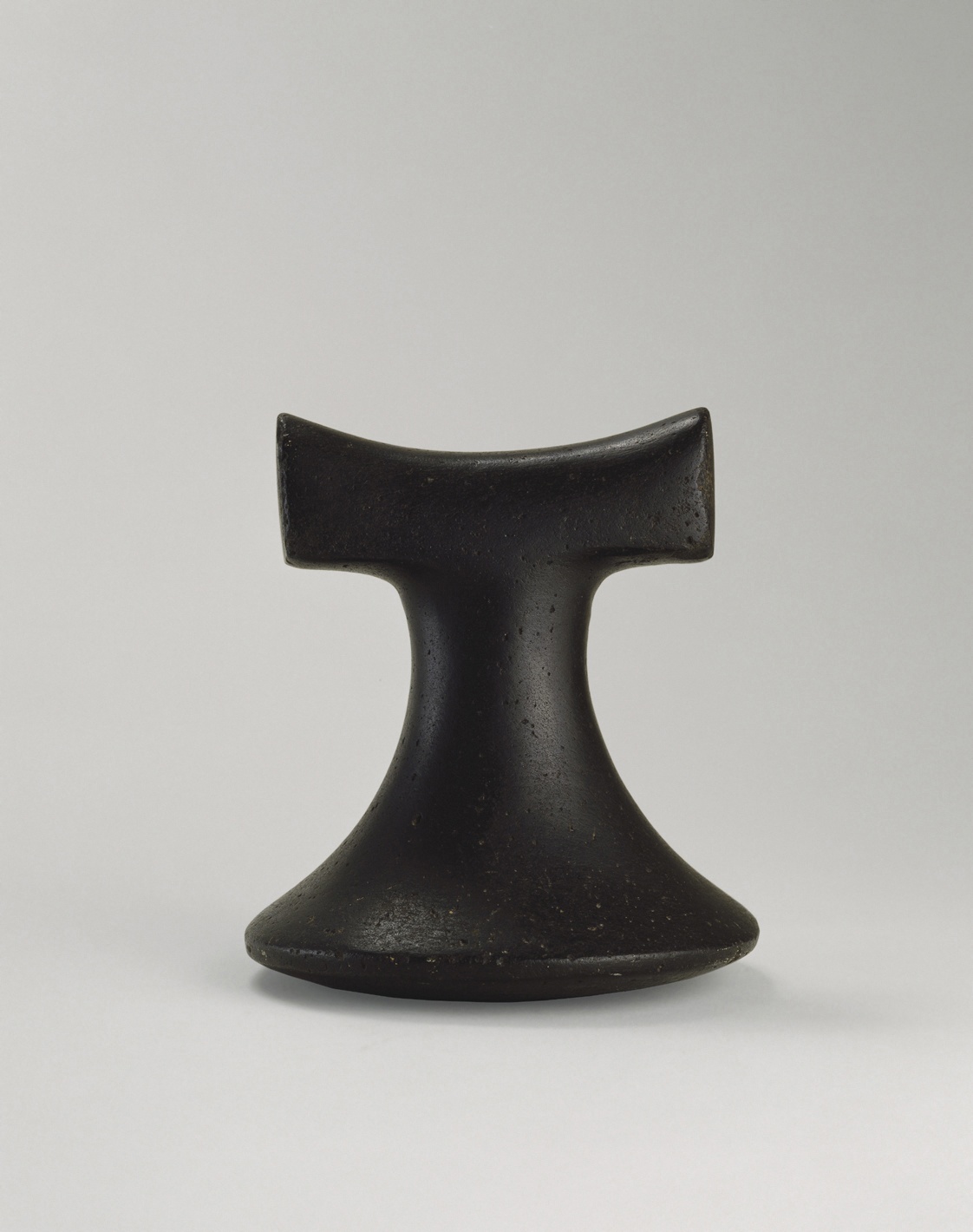 Made of black compact basalt from Maupiti, Society Islands.

Pounders are of three types: with forked top, with cross-bar and with faceted top. This belongs to the cross-bar type which is the classical Maupiti form.

These pounders were used to make a paste from the pulp of fruits and edible roots, mainly bread-fruit and taro, by crushing them on a stone or wooden surface; this was generally a plateau, often on four feet, a papahia or 'umete.

This mash was fermented and called by the Tahitians mahi, though it is generally known as poi which is the Hawaiian term.

William Parry, the 18th century artist, painted the Ra'iatean [1] Omai with Banks and Solander who accompanied Captain Cook[2] on his first voyage. The pounder was almost certainly given to Parry by one of them.

A. Kaeppler [3] says: "Omai may also have given Tahitian objects as gifts to his English hosts. For example, Omai was painted with Banks and Solander by William Parry, at whose estate Omai was a guest. Indeed, it may be that objects from Omai (or Banks or Solander) were included in the sale of the estate of Gambier-Parry in 1971 [22]." Footnote 22 reads: "For example, a carved object from the Australs and a Tahitian food pounder now in the Ortiz collection, Geneva."

Two very close comparisons are one in the Musée de l'Homme, Paris [4] and another which appeared in a Christie's Tribal Art sale[5], from Admiral Lord Horatio Nelson, in all likelihood also from one of Cook's voyages as he probably acquired his pounder directly from Sir Joseph Banks or their mutually close friend Sir William Hamilton.

1 Omai was born on Ra'iatea which belongs to the Leeward group of the Society Islands. He later went to Tahiti and Huahine.

2 Captain James Cook was entrusted with the task of surveying and drawing up charts of certain parts of the Pacific Ocean by the British Admiralty and The Royal Society of London. The first voyage (1768-1771) "... was primarily to observe the transit of the planet Venus ..." (Duff, R.: A Retrospect of Cook's Polynesians, in: No sort of iron. Culture of Cook's Polynesians [Christchurch, 1969-70], p. 7). Sir Joseph Banks contributed financially to this expedition for which he and Daniel Solander were the naturalists.

On the return of the second trip (1772-1775) Omai at his own request visited England sailing on the Adventure. He was the first Polynesian to do so and while there was under the protection of Lord Sandwich and Sir Joseph Banks. A great social success, he was much in demand and admired by the ladies for his nice manner and fine looks. On the third voyage (1776-1780) Cook was unfortunately murdered in Hawaii in February 1779 owing to a misunderstanding. It was on the early part of this trip that Omai returned to Huahine, settling on land that Captain Cook had bought for him.