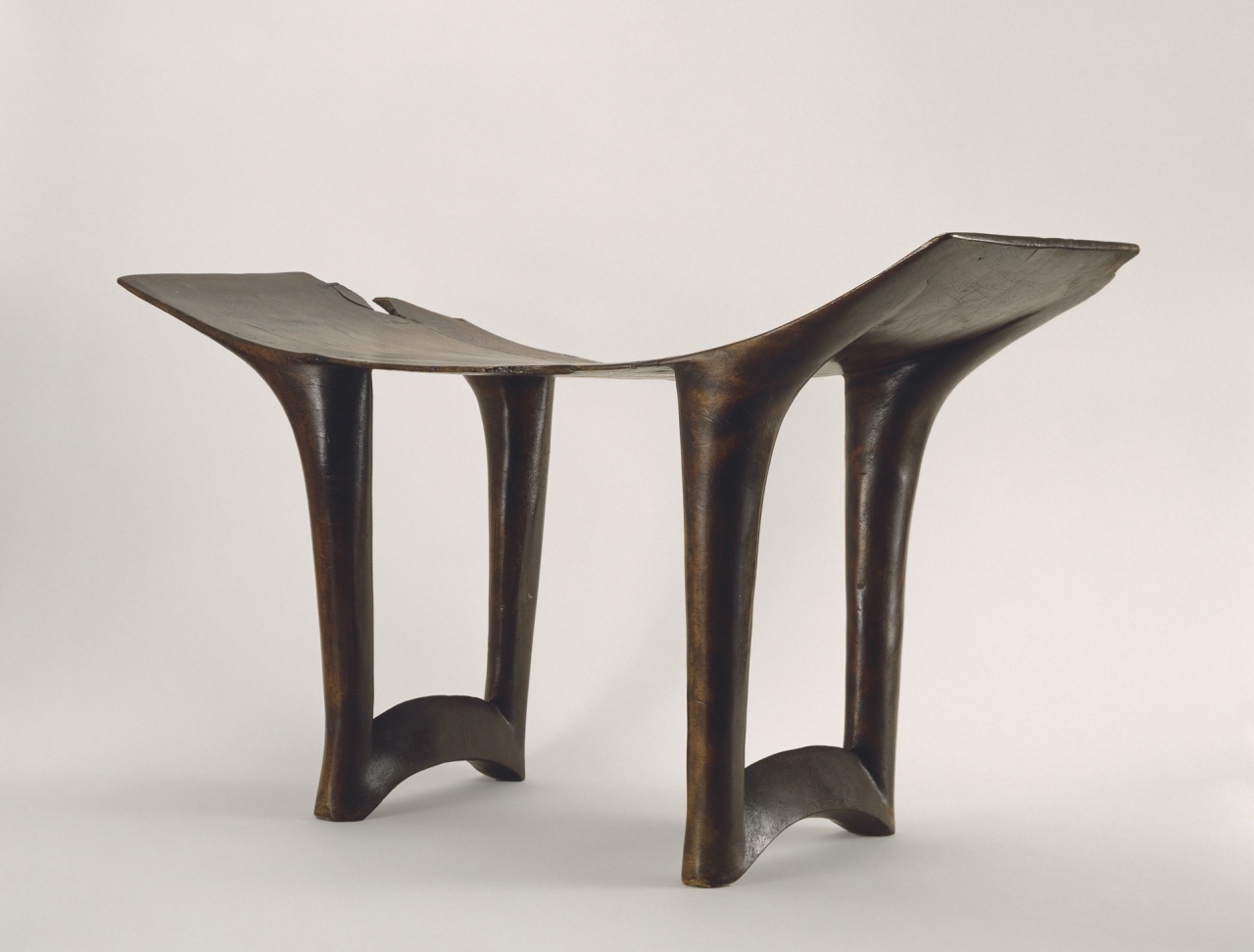 Carved [1] from a single piece of wood (probably Artocarpus altilis/bread-fruit 'uru). The long curved seat of varying thickness rests on four tubular-like legs joined at the feet by transverse arched sections. Two of the legs with this section have been at one time broken and reaffixed.

The upper part of one of these with a small piece of the seat itself, also broken off at the time, has been reaffixed.

Condition: the seat has one corner missing and on the other end where the small section broke off with one of the legs, a little piece is still held in place by a thin strip of European iron. There are traces of another such repair [2] but the wood is missing.

Wooden stools were of two types: those with joined feet and those with four separate feet, the latter from elsewhere in Central Polynesia.

In Polynesia, household furnishings took abstract and aesthetic forms. William Ellis tells us of the inhabitants: "In general they sat cross-legged on mats spread on the floor, but occasionally used a stool ... The rank of the host was often indicated by the size of this seat, ..." [3] Stools of this size and perfection were used only by those of highest rank, the hereditary chiefs arii.

It should be noted that the wooden pillows (uru'a), of similar design, called headrests and found in Western and Eastern Polynesia, were mainly used by chiefs.

The only comparable example is a large stool now in the British Museum [4], which is, the author feels, slightly Post-Contact, probably late 18th century; it differs in the mechanical, fairly uniform thickness of its seat, unlike this one which exemplifies a particular finesse with different parts of varying thinness.

Another difference, which may have a bearing, is that the British Museum example has a flat bridge [5] joining the feet underneath, whereas here they show a low-curving arch, a refinement.

Two smaller examples are the seat [6], now in the Tahiti Museum, that belonged to Omai, the first Polynesian to come to England, who arrived in July 1774 on the H.M.S. Adventure, and a seat [7] in the Swedish Ethnographical Museum, Stockholm, brought back by Sparrman on Cook's second voyage [8].

1 The author thinks without metal tools, however instantaneous was the adoption by natives of any they could get a hold of, and feels that the stool was surely made before Contact, by the very nature of details of its shape, of surface and of weathering. It is to be noted however that the earliest metal tools that they used were of iron, not of hardened steel, which like sharp stone tools were wont to make slightly bruising impacts, and to differentiate between them is highly problematic, if possible at all.

2 The damage and repair would appear to go back to the 18th/early 19th century, after the stool had been collected.

5 With respect to curves, Ellis says (loc. cit.) "Those in more ordinary use were low, and (the seat) less curved, ...". The author wonders whether curves in relation to seats may possibly have been a characteristic proper to rank while for him they are an aesthetic quality. It is of course true that the two comparisons mentioned below also have flat bridges, however they are both smaller and Omai was not a high-ranking arii; a seat made for the latter would have been executed by the best craftsman doing the best work possible. Inasmuch as the British Museum example may be slightly Post-Contact and made for barter or to satisfy a demand, it is both sturdy and usable, and would not have been made in the spirit of the present example.