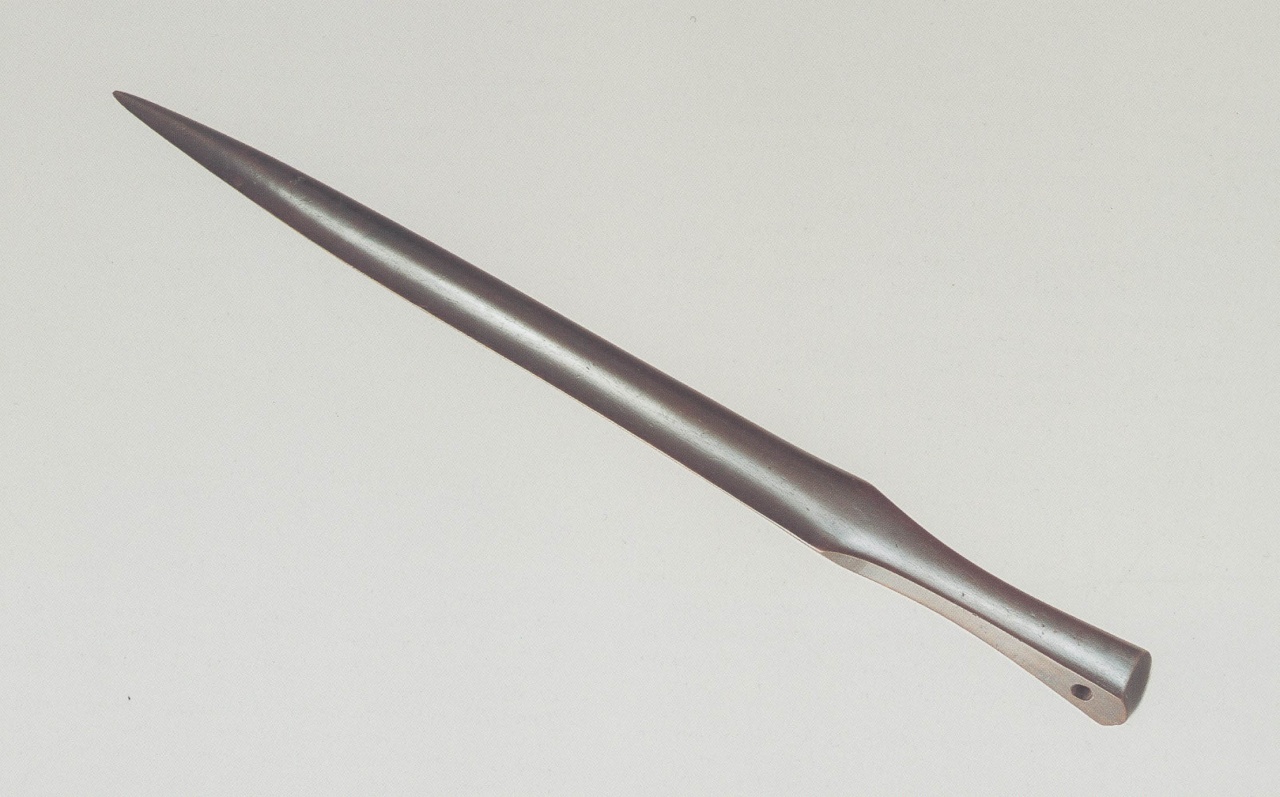 Made of a hard wood, straight in grain, probably kauila (possibly uhiuhi or pua), a tall straight very narrow-trunked tree. Carved and faceted with the usual tools, the butt of the grip pierced for the wrist loop attachment, a cord made of olona, presently missing. Particularly carefully finished and beautifully polished with tapa or bamboo leaves and repeated applications of kukui, candlenut oil, by hand rubbing.

When Hawaiians warred, they fought in the open and did so according to certain rituals, first from a distance with spears and slings and quickly closing in to hand to hand combat which they preferred.

The pahoa was employed for parrying incoming spears and in close hand combat for stabbing.

The dagger is peculiar to Hawaii where with spears it was cherished as a weapon for fighting. Throughout the rest of Polynesia, the favourite weapon was the club, almost each island having its characteristic type, beautifully carved and finished, though spears were also widely used.

The blade with its central ridge and tapering form ending in a sophisticated grip that is more than the simple extension it appears to be, exemplifies the Polynesians' feeling for shape rendered plastically with an understanding of three- dimensionality. This dagger is yet another example of their unique gift for marrying the utilitarian with purity of line.

For the provenance of our dagger, Kauai is a strong possibility, for Cook's two major landings were Kauai and Niihau. He relates how he saw many natives on Kauai carrying daggers as well as spears [5]. Cook's party was struck by the sheer quantity of pahoa on Kauai and this re-inforces the likelihood that the present example came from there.

Published :
A Collection of American Indian and Oceanic Art, The Property of the Trustees of the Warwick Castle Resettlement, Sotheby's, London, 8 December 1969, no. 177 ill.

1 For a brief outline relating how items from the islands of the South Seas entered their collections see cat. no. 278.

3 Born (1751) in London the son of Abraham Wäber, a sculptor by profession. He went back to Berne, his father's native town, to study painting there for three years, and then to Paris for five. Daniel Solander, the Swedish naturalist who was on Cook's first trip, chose him and the Admiralty appointed him to be the "sketcher and painter" for the third voyage which left England in July of 1777. He made more than two hundred drawings and "sixty-four of them were copper-engraved and published by the Admiralty in 1784 as a pictorial atlas to the three-volume work, A Voyage to the Pacific Ocean... by Cook and King (London, 1784)". On the trip, Webber made a small personal collection of artefacts which he subsequently gave to the library in Berne. Today it is in the Historical Museum there. He died in 1793 (Kaeppler, A.: op. cit., p. 25 f.).