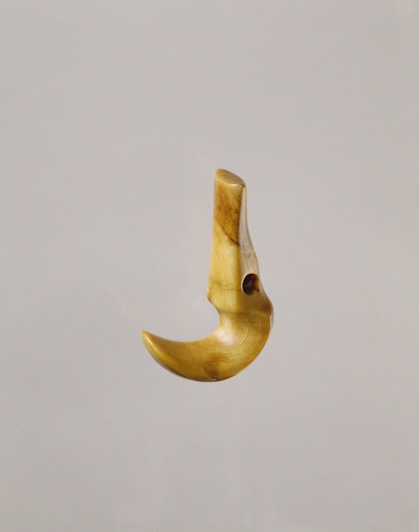 Carved - from a whale tooth - in the shape of a stylized hook with a fine finish, the lower end of the shank pierced with an irregular squarish hole.

A clean break across the hole, both parts glued together. Colour: a soft pale to golden brown.

This pendant of a shape peculiar to Hawaii would have been suspended by hair cordage. Its size, the way the suspension hole is made, its general smoothness and wear attest to its Contact or slightly Pre-Contact dating. When Cook arrived, only small specimens like it, some even tinier, were in use, sometimes made of shell, coral, wood or stone since cachalot ivory was extremely rare.

After the first contacts, ivory pendants became more common, though of much larger size, as marine ivory from whalers and traders was available [1] in quantity. Large hooks were fashioned and worn suspended by coils of human hair consisting of eight-ply square braids ending in cords of olona for tying behind the wearer's neck.

Whale ivory pendants, whether on Hawaii or other Polynesian islands, were ornaments of the nobility. Only the ali'i, the chieftains or ruling class and certain high-ranking women wore these as symbols of their mana and rank.

The meaning or significance of the shape is uncertain; the hook element may depict a protruding stylized tongue. Some think that it represents the "chin-mouth-tongue" [2] complex or the overhanging brow of certain 'aumakua type sculptures. Others consider that upside down it may be the stylization of a chieftain's head, or we may simply be faced with the embodiment of the mana of an ancestor.