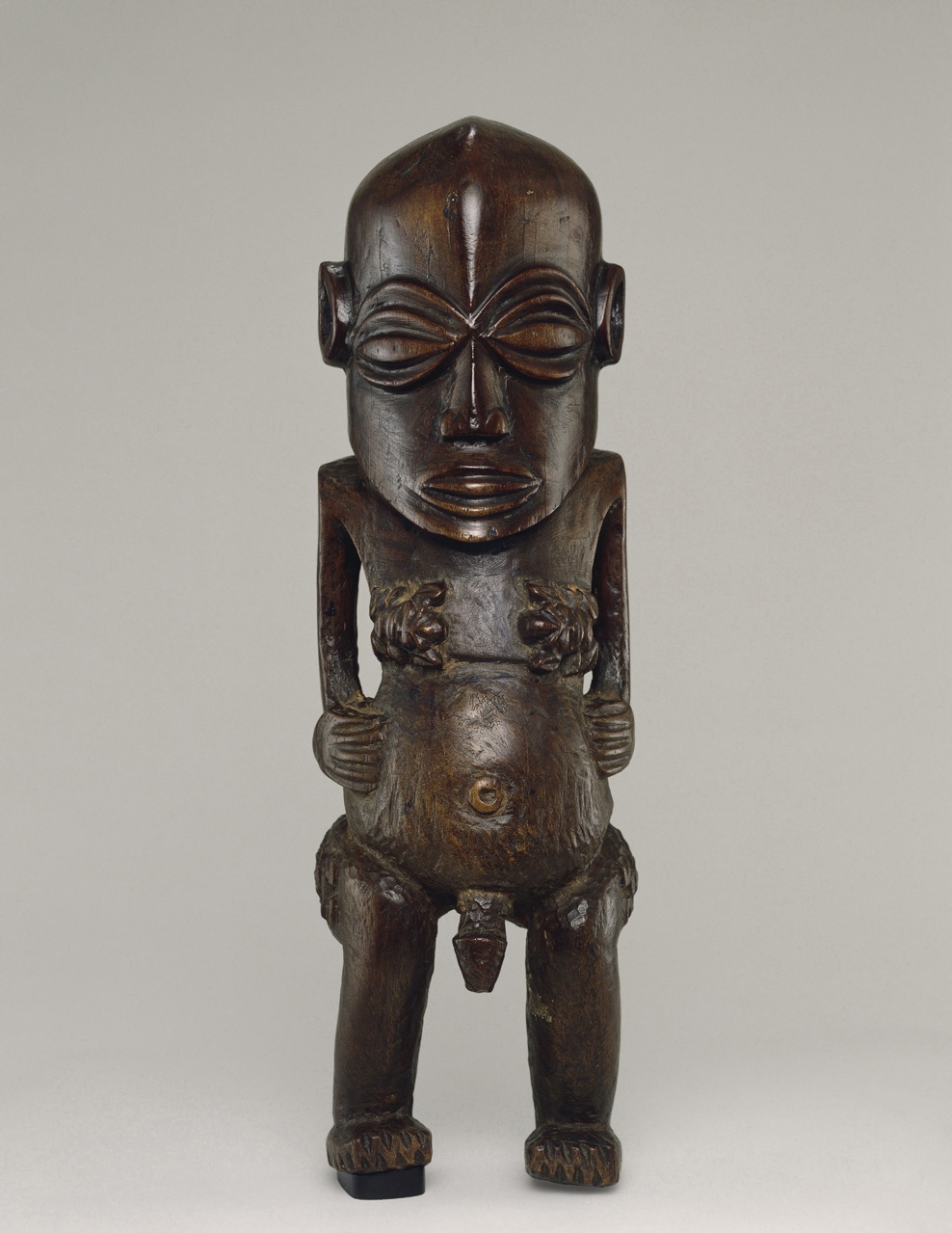 Sculpted by a ta'unga (specialized carver) from a dense brown hardwood, probably toa, known as ironwood (Casuarina equisetifolia), of which the Rarotonga staff gods were made. Traces of "rather blunt edges and shallow curves" indicate the use of traditional stone or shell adzes [3].

Rarotonga is the largest of the Cook group (Eastern-Central Polynesia), a group that bears the Captain's name though he hardly stopped there. The main island was inhabited by three tribes (vaka), each ruled by its own ariki, whose respective territories comprised the shoreline and the hinterland up to the top of the mountains. It was a hierarchical society that adhered to the concepts of mana and tapu, with the tribal ancestors of the most important families regarded as deities.

The sculptural production was by all accounts very considerable. It comprised staff gods possibly representations of Tangaroa, fisherman's gods, such images as this with the only other so far known example in the British Museum.

The Missionaries, responsible for the massive destruction of idols, nonetheless saved the odd example to take back to England; unfortunately, however, without recording the name of the god represented or paying much attention to their provenance.

It is to be remembered that Central Polynesian sculpture portrays features that find their echo in the different groups since they all hark back to a common origin (see fly-whisk handle, cat. no. 273). His hands on his stomach are a trait typical of Central Polynesian sculpture, whether from the Society Islands, the Cook or the Australs. However, Rarotongan sculpture has its specific characteristics, of which this god is typical with his heavy proportions, large head - one third of the total height - with its particularly distinctive features: a large highly-domed forehead with the central line running down to form the nose, elliptical eyes with protruding eyeballs and lines for the eyelids and eyebrows; also the pronounced ears, pointed chin and the incised zigzag grooves for the toes. His head is tucked into his raised flat squarish shoulders. He shares many of the characteristics of the so-called fisherman's gods.

When discussing this figure with Dale Idiens, the author suggested that it was deliberately left unfinished, some parts being intended to be wrapped in tapa or barkcloth. Idiens thought it more likely that the sculptor might have died during the course of its making or as she said "... he might have infringed some part of the strict ritual associated with the process of creating a sacred image before it was completed, and owing to the operation of a 'tabu', none other could continue the work." The author notes that the central part of staff gods, which were wrapped, were likewise left rough compared to the rest of the carving. The question remains open.

Their sculptures represented their gods (atua) who were tribal gods, supernatural spirits and deified ancestors. Chief among these were Tangaroa, the creator and sea god, Rongo, the god of peace and agriculture, and Tane, the god of fertility and craftsmen. Unfortunately, we do not know who is represented here and we are even uncertain about the famous figure in the British Museum, acquired by Williams in 1821 from Rurutu, who described him as the god A'a, for Ellis published the piece in 1829 as Tangaroa [4].

It should be noted that on our image appear six little stylized figures, the two on the chest fairly well finished and those on the thighs and buttocks left rough. They bear very close resemblance to the bat-eared figures that appear on the sides of the staff gods, in a stylization that functions as though they were the body, arms and legs of the head and bust of the figures along the shaft themselves interspersed with other bat-eared figures of a larger size and in the round.

These staff gods are sometimes thought to be Tangaroa "..., the Polynesian god of creation, in the process of generating other gods and men, and an ancestor deified as the founder of a lineage" [5] . Their lower end terminating in a large penis would be an added symbol of fertility. It is to be noted that both the example in the British Museum and our image have large penises and when this one was brought back, his ears were adorned with a pair of whale ivory testicles dangling from each on finely braided human hair, surely an import from the Australs, but also a symbol of fertility (see the major example, cat. no. 272).

Since both images have secondary figures, it could be that they are representations of Tangaroa.

This entry is based on information gleaned from S. Phelps (Art and Artefacts of the Pacific, Africa and the Americas. The James Hooper Collection), Buck (Arts and Crafts of the Cook Islands),and especially Idiens and Barrow who have published the piece.

1 A member of the London Missionary Society, he went to Tahiti in 1821 to teach cotton-spinning and, hoping to find more efficient workers, to Rarotonga in 1833. Unfortunately machine-made imports doomed the venture to failure and he returned to his home in Manchester in 1835, bringing the image back and keeping it for himself.

2 Acquired by the author at this sale and perforce included in the Sotheby auction of his collection in 1978, where luckily bought back.