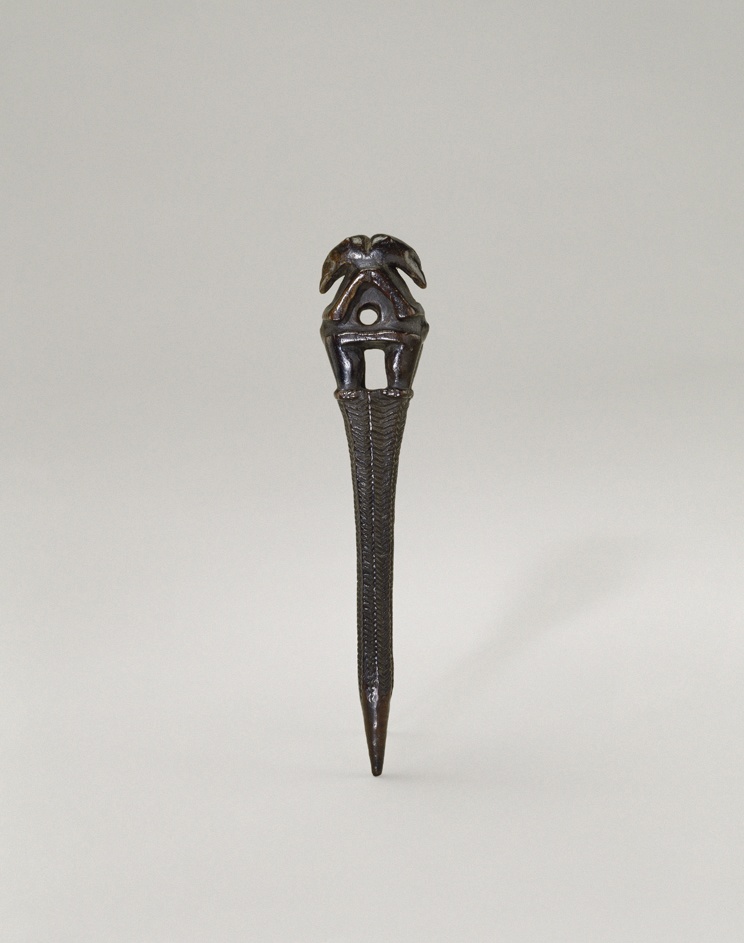 Beautifully carved [2] of a hard wood, of fine workmanship and finish.

Rhomboid fly-whisk handles formed by two highly stylized janiform figures have been ascribed in the past to Tahiti. However, Roger G. Rose, in an abstract [3], ascribes them to the Australs and maybe to Rurutu.

All fly-whisk handles surmounted by a single figure are fromTahiti (Society Islands).

Rose divides the Austral group into three types, of which we think his Type A, the ones with larger figures [4], more angular and open-worked, are Post-Contact. We feel that the earlier examples, in our opinion Pre-Contact, are his Types B and C, with figures half the size of Type A. Types A and B have disc grips while on Type C, to which our example belongs, the grip is a fluted column divided into eight or nine facets with chevrons.

The whisk itself would usually have been of sennit fibre - though human hair was sometimes used - coir-bound to the shaft.

Comparable pieces to ours, though with disc-shaped grips, are the one from Rurutu in a drawing [5] by John Frederick Miller done in 1771 of a piece probably collected by Sir Joseph Banks on Rurutu during Cook's first voyage; another comparison is in Vienna [6] which came from the Leverian Museum collections assembled by Sir Ashton Lever from items collected during Cook's voyages and dispersed in 1806. This piece was also probably from Cook's first voyage and like Banks's example, collected on Rurutu in 1769.

Examples of handles with chevrons are one in Auckland [7], one in the Hooper collection [8] (attributed by Steven Phelps to the Austral Islands) and another in Oxford [9] .

The confusion with Tahiti - due to the lack of reliable sources - stems from the fact that religious and artistic contacts were very close in earlier times between the Cook, Austral and Society groups and all such items probably hark back to a similar origin. Also, the earlier voyagers were wont to label specimens with the term "Otaheite", using it generically rather than specifically, to cover a whole group of islands.

The body form is Central Polynesian but the style is Rurutu, evidenced by the equilibrium and symmetry of the figures with similarities to figures on Raivavae (Austral Islands) drums.

The body of this example is pierced through the centre and the two knobs on each head represent tufts of hair.

Fly-whisks were symbols of power and prestige and as such were possibly also used during funerary ceremonies around the body of the deceased that was exposed for several days before cremation.

However, they also had a utilitarian function since the Polynesians would not put up with flies on their food.

Our example as well as Oldman collection 386 [10] ends in a pencil-like point; we wonder whether these pieces were not intentionally made [11] thus either to be placed in a little house shrine or, however far-fetched, around the corpse during funerary ceremonies.

We do not know the significance of the figures themselves, whether they relate to ancestors or to deities, but in any case, they reveal artistic competence in a clearly defined style that betrays a great sense of composition and technical virtuosity.

Their formalism is comparable to the best Greek geometric bronzes, however, we feel, with greater plastic density and spiritual content.

1 The object's history is unknown. The school probably received it from an "old boy" and when it closed down after
the second world war, its records were destroyed and its assets sold off.

3 Kindly sent to the author before publication of his article "On the Origin and Diversity of Tahitian Janiform Fly Whisks, in: Mead, S.M. (ed.): Exploring the Visual Art of Oceania (Honolulu, 1979), pp. 202-213.

11 This is a hypothesis that is open to question, as it may be more likely that having been broken, they were carved down to a blunt end.