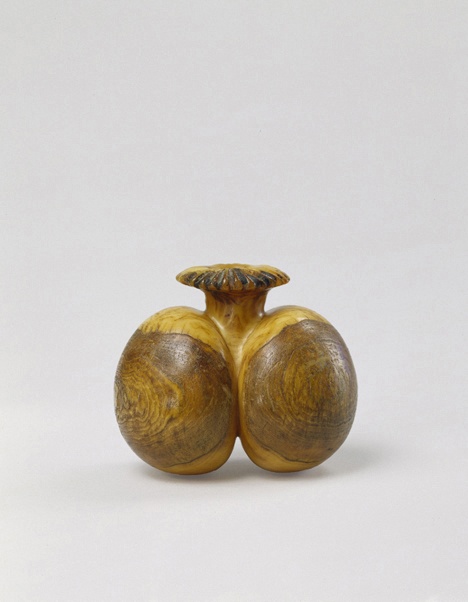 Made from a whale tooth of exceptional size and carved from the section where the crown projects from the root with an unusual understanding of the grain and pattern of the ivory. The lug, which we thought might represent a vulva, is more likely to be, with its grooved rim, a representation of wrinkled skin.

Most Polynesians of high rank wore breast pendants called rei or lei. About fifteen necklaces with amulets in the shape of testicles, stylized rectangular seats, pigs and the odd ridged element have survived. These pendants of cachalot ivory were emblems of the chief's virility, rank, wealth and food. The amulets were strung by loops of sennit on a sennit cord wrapped with braided human hair; they were worn as emblems of authority and power.

There are examples of rei, sets of testicles of smaller size, worn by chiefs as ear pendants.

It is to be noted that the Rarotonga Deity, cat. no. 274, when brought back, had a small rei attached to each ear by a string of braided human hair.

We know only of one other example of such exceptional size, in Cambridge [1], which was given to the Rev. J.J.K. Hutchin by Ngamaru. He was one of the three ariki (chiefs) of Atiu, who probably brought it with him - maybe a family heirloom - when he married Makea, a chieftainess and the most important ariki of Rarotonga.

Both amulets are probably Pre-Contact and would have been of enormous value because of the rarity of cachalot ivory at the time. Considering their size they were probably not part of a necklace and would have been worn around the neck as a single emblem or sometimes hung from the waist, which gave
its wearer when thus worn certain rights over any woman he encountered [2].

The origin of such amulets and necklaces is still a debated question. Buck [3] assigned these to the Cook Islands of Atiu and Mangaia, since some of them were supposed to have been found and to have been made there, though he recognized an Austral influence. However, Duff, by comparison with a bowl from Rurutu of sperm whale bone with two little piglets at the handle end and two necklaces [4] found on Rurutu or Tupua'i (Tubuai), Austral Islands, ascribed these necklaces to the Australs. Barrow [5] would seem to agree. Idiens [6] leaves the question open as does Phelps [7] who gives a clear account of the subject.

In any case, their origin is Central Polynesia and whether only made in the Australs and exported to the southern Cook group or also made there, is uncertain.