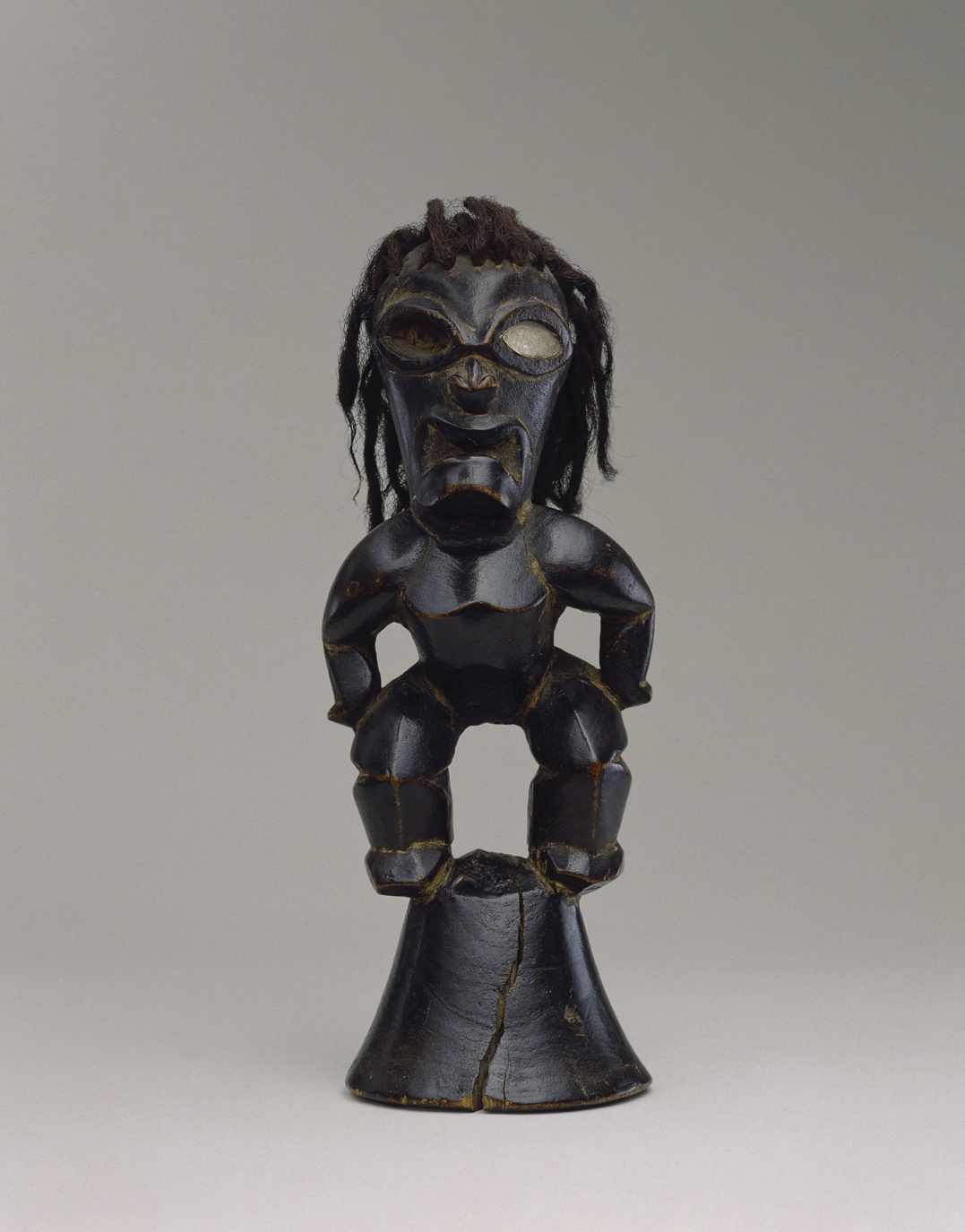 Made of a lightish brown wood probably darkened with plant juices and polished, with strands of human hair pegged into holes on the head, a deep cavity in the centre of the crown for placing various fetish materials. Left eye still inlaid with pearl shell.

Condition: the odd strand of matted hair missing: over left eye, above outer corner of right eye and at centre back of head behind cavity. A deep crack down the front of the cone-shaped circular flaring base [2].

This image is in all likelihood an 'aumakua, a sort of personal god, "... the primary idea of the word 'aumakua is the spirit of an ancestor, deified and rendered potent for good or evil" [3]. Carved according to a certain ritual by sculptor priests called kahuna kalai and activated when finished, he was probably used in sorcery and associated with magic. Hawaiians had an anthropomorphic concept [4] of the universe and their sculptures embody ancestral deities and cosmic spirits. To the Polynesians, gods were invisible spirits symbolized by material objects.

The author has lived with him for most of the past twenty years and is certain that the shaman-priest that used him in his invocations imbued him with fearsome magical power [5], as revealed by his sculptural [6] forms. His facial expression is aggressive, awesome and frightening; his forms are bold, vigorous and of an incredible power. He has a large head since it is the seat of mana. He is vitally present, and his body and limbs are faceted and sculpted in relation to each other in a manner that renders him terrifyingly dynamic. His profile with its incredible jutting chin personifies brutal might.

A very good comparison is the 'aumakua image in London [7] collected in 1825 by John Knowles at Hale-o-Keawe Honaunau, Hawaii, when the H.M.S. Blonde called there. Though very similar there are differences: it is fifty percent taller, the mouth is almond-shaped and it has no cavity on the crown of the head or in its back for fetish materials. It was probably made by a different sculptor at a later date, maybe even Post-Contact. The eyes, mouth, the arms and the tall neck, among other features, are less strong, maybe an indication, with the lack of a cavity, that this god functioned as a protective spirit and was not used for sorcery. Its blackened surface is slightly different. However, it surely stood on a base which may have resembled that of this figure, since the outer underside of both its feet [8] is blackened and only the inside is the colour of the wood, as are the breaks on the front and inside of both feet. The back of the right foot is broken off.

In this entry the author has not discussed Hawaiian religion but has gone into the history of this image at length and has even related his personal experience. The reasons are as follows: an assessment of their religion would be conjectural, and just before the arrival of Europeans important cultural changes were taking place, a reformation of ideas and particularly religion [9]. The kapu system was completely overthrown in 1819. The history of this image is essential as he may be one of the few that is genuine in the sense of having been sculpted - before the arrival of Europeans - with all the prescribed ritual, and activated. This is demonstrated by the way he is made and the ethos he exudes. Moreover, he was almost certainly brought back on the third voyage, although when the the Resolution and the Discovery docked in England, they were surely already carrying on board images made during their stop in Hawaii. He is unusual in that he stands on a pedestal and his hands are connected to his thighs, features common only to temple images (see footnote 2). Why this is so is uncertain. Very few of the extant images can be old for a variety of reasons: climatic conditions would have ensured that they were short-lived, and the disruption of a highly formal class system would have meant that a political and religious climate propitious to their creation no longer existed. However, the immediate awareness of the Europeans' desire for curios motivated a sculptural production for barter. Davenport [10], following a suggestion by Kaeppler, says "..., it is quite possible that some of the images that came back with the early European voyages may have been made expressly for trade to Europeans rather than for religious or other traditional uses". Though the outward appearance and the physical way of making such images may be the same, even if metal tools were used, they are devoid of content and were not activated. The natives may have kept the outward forms of ritual for some time but without true faith their images would have been devoid of meaning, and that is what matters.

What is it that imbued the Polynesians with this unique gift for creating what are among the most perfect sculptures that the author knows of, where outward appearance may reveal content?

1It is almost certain that this work was acquired in Hawaii on Captain Cook's third expedition in 1779, and entered the collection of the Earls of Warwick through Sir Joseph Banks and Charles Greville possibly soon afterwards and, if not then, surely in 1806.

In a letter dated 20 August 1973, after he had sold me the piece which he had acquired at Sotheby's auction of the Warwick estate on 8 December 1969, Ralph Nash wrote that after much investigation and research, he was convinced that the piece was "brought back on Captain Cook's ill-fated third voyage" and ended up in "the great collection of Sir Ashton Lever" who had bought in 1781 almost all the artefacts from this voyage. This so strained his finances that he was forced to "sell his entire Museum". He attempted to set up "a trust to operate his Museum" but found "no one interested" and failed. His desperate efforts to have the "British Government buy the enormous collection for the British Museum at a fraction of its worth", also failed. In 1786, he was forced to dispose of his Museum by lottery but only eight thousand 1 Gn tickets were sold out of thirty-six thousand and he died a disillusioned and broken man two years later in Manchester. "A Mr James Parkinson drew the winning number" and became the owner of "the Museum and all its collections valued at the time at £ 53.000". Everything was "removed to a house in Albion Street near Blackfriars Bridge. In 1806 a public auction was made of the entire collections by King and Lochee in a 65-day sale from May 5th to July 19th 1806 and comprised over 7800 different lots and at this sale interested parties came from all over Europe, England, etc. and it was at this sale that the Vienna Museum acquired all of its Cook material which they have to this present day in their collections. Also at this sale was Joseph Banks who bought anonymously both for himself and for his friend the Hon. John Greville, eldest son of the Earl of Warwick, and at this sale your Hawaiian figure was sold and so entered the collections of Warwick Castle as did a number of other items all subsequently sold at Sotheby's".

Sir Joseph Banks, President of the Royal Society from 1778 to 1820, was the financial sponsor of the scientific part of the expedition and was the coordinator of the results of the voyages of exploration and must have been concerned with the collection brought home by the expedition after Cook's death in 1779. The Hon. Charles Francis Greville, F.R.S. (1749-1809) was a very close friend of Banks and, like him, a member of the Dilettanti Society. He was the younger brother of George, 2nd Earl of Warwick from 1773 to 1816, F.R.S., who was also a friend of Banks and the greatest collector of his family. Charles Greville is the natural channel through which this work could have entered the collections of the Earls of Warwick. He himself may have been the earliest English owner of the work; and it is relevant to note that he predeceased his brother, died unmarried and lived in the latter part of his life at Warwick Castle. It may also be noted that Greville was the nephew of Sir William Hamilton, who presented to the King of Naples "curiosities ... of Captain Cook's collecting amongst the islands of the South Seas (entry of 5 June, 1787 in the Italian Journal of Captain Robert Scott, National Library of Scotland MSS. 2893-95). As relations between them were close, it is likely that Greville helped Hamilton to make this acquisition of Pacific antiquities. In referring to objects from the Collection of the Earls of Warwick, The Trustees of the Warwick Castle Resettlement, Dr. A. Kaeppler says (Artificial Curiosities <Honolulu, 1978>, p. 5 n. 9): "Some of the objects from this collection were certainly from Cook's voyages, but no documents can be found that can identify which objects came from Cook's voyages and which did not".

M.W. Farr, Warwickshire County Archivist, kindly wrote to the author on 7 November 1986 stating that a description of the Castle was made by the Rev. William Field, published in 1815. In it is described the Armoury Passage, The Museum, where, says Farr: "... there was a very large collection of miscellaneous armour and antiques". An inventory was made in 1853 and Farr adds: "Unfortunately most of the exhibits were beyond the descriptive powers of the maker of the inventory, but he does apply the words 'South Sea' to quite a lot of them, mostly in what he calls the 'Indian Department'. There is an 'Indian God' between some stuffed owls and a flying fish on an earlier page, but it is impossible to say whether this is really your Hawaiian figure. The whole area was an extraordinary muddle of interesting but unrelated things." He concludes: "I think your carving must have been on show in this part of the Castle". It should be noted that under the section "The Indian Department", there were pieces of South Sea ornament and manufacture.

2 Cox (Cox, J.H., Davenport, W.H.: Hawaiian Sculpture [Honolulu, 1988], p. 101) points out that its being on a pedestal is unusual as are also the hands connected to the thighs, features common only to temple images.

5 The author has become an agnostic and does not believe in any religion or ideology but is convinced that there is a power of mind over matter and that certain humans can imbue material objects with powers which may be beneficial or malevolent to certain beholders. During the first few years of his ownership of this image, every woman that saw it in his home was horrified and disliked it. It made them feel uneasy. For unfortunate personal reasons the author had to sell his collection at Sotheby's. When the 'aumakua came up and just as Peter Wilson, a friend of the collector and Chairman of Sotheby's, had his arm raised about to drop the hammer, the author turned to his wife at the fractional instant and blurted out as though from the depth of his plexus "Do you think that he'll forgive me for letting him go?" The author's wife was horrified. Three years later he was able to buy him back and one day having told been told of a Greek Orthodox priest who practised exorcism, he said to himself "why not, let's try something". He arranged an appointment and the priest accepted to conduct a forty-minute ritual with incense and invocations over the 'aumakua as the author sat silent on a chair. Amazingly enough, from that day onwards, the image no longer gives off evil, he has been neutralized. The author cannot explain this but can only relate what he observes.

8 The author wishes to thank Mrs. Jill Hassel who answered his questions over the phone after having kindly examined the British Museum example in storage.