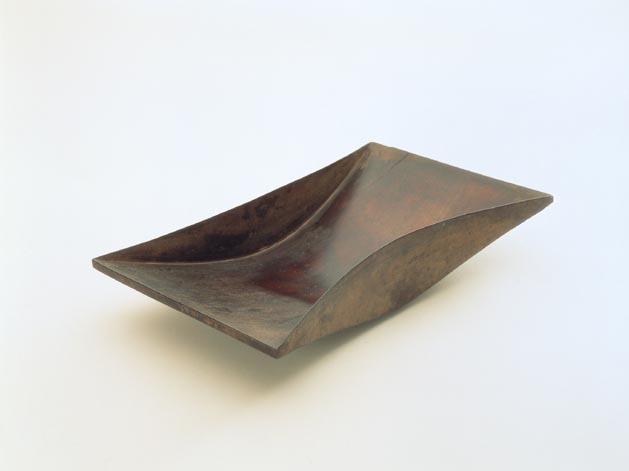 The dish of rectangular form, carved from a single piece of hard wood without the help of metal tools, has inward curving sides and sweeps up towards its ends. The plateau for purposes of solidity and use is of a thickness that varies between 10 and 11.2 mm, whereas the top of the curving sides are only 2.2 to 2.5 mm.

Condition: a crack on one of the ends of the plateau and a hole on the underside made in the Musée de la Rochelle to enable suspension by means of a hook (since removed by the author).

The surface a blackish red patina, most of it incrusted with what may be the remains of smeared food mash.

The inside of the dish, in part cleaned [4], reveals a stained red surface with a painted decoration composed of a starfish, small circles and seesaw patterns.

Vessels such as this, of sophisticated form and superior craftsmanship, had in all likelihood a metal prototype, maybe originating with the earliest wave of immigrants who came from South-East Asia. Though we know of no example, a culture such as the one of Dong son, late 1st millennium B.C., may have been the source of inspiration.

The author once wrote of another example: "The most successful form for a dish ever made in any civilisation, of masterful abstract and pure line. The relationship of curve and plane, of solidity and lightness, of strength and elegance to its form creates a volume which is a great sculpture - a sheer delight to the eyes, a homage of man to space. Might it not be that the timeless quality of life in some primitive societies contributed to their being able to create such perfection?" [5]

A similar vessel is the example [6] given to the National Museum of Hungary by Count Festetics de Tolna and from the same voyage as this one, there is a smaller one [7] in New York, a larger one [8] of beautiful shape formerly in the author's collection, several in Chicago [9] of which most are of the later 19th century, and a fine and old example in the Cambridge University Museum, Cambridge.

1 Wuwulu is an island within the geographical area of Melanesia, close to New Guinea, which in German is referred to as Para-Micronesia. Its population is predominantly Micronesian related to the inhabitants of the Caroline Islands
in Micronesia proper.

2 From his eight-year trip in the Pacific and Indian Oceans in the last decade of the 19th century.

3 De-accessioned and on the market by exchange.

8 Ortiz, G.: loc. cit., from the collection of Julius Konietzko, previously J.F.G. Umlauff, dealer and collector,
both of Hamburg.

9 Unfortunately, the author has no references for this or the Cambridge example.