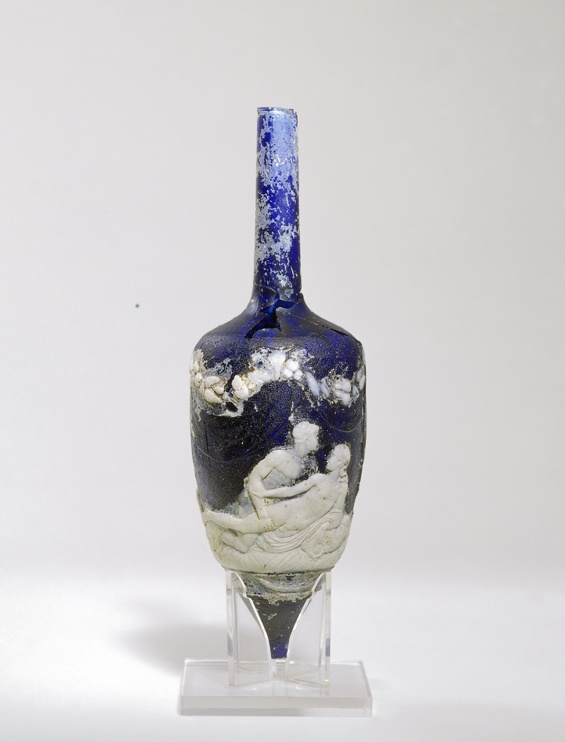 Cameo glass was probably first made in Rome during the 1st century B.C.

Thus named because after blowing or casting the raw material, it was then carved in the technique utilized for semi-precious stones composed of two or more layers of different colours. Blue and white are the two colours almost always used.

The present example was made in two stages: the general shape was first blown, casing the layer of one colour over another; the outer layer of white glass was then cut away and carved with the help of a cutting wheel and hand tools which further cut, faceted, scraped, ground and polished, revealing the contrasting blue layer which in turn was also worked.

Condition: glued together from several pieces without any filling or restoration. A few slivers missing from the undecorated parts. Slightly weathered and iridescent.

This perfume bottle was probably made in Rome and, for its similarity in style to cameos of the Augustan period, it should be dated around the turn of the century.

The closest parallels for the subjects, as pointed out by Whitehouse [2], are to be found on Arretine pottery and in cameo glass, a fragment of a cup in the British Museum [3]. The perfume bottle from Torrita di Siena [4] in the Archaeological Museum in Florence is of this shape. The Seasons Vase [5] has garlands that are similar to those on ours.

1 Whitehouse, D.: Cameo Glass. Conf. BM, Dec. 1987. (We would like to thank David Whitehouse for having given us a copy of the text of his lecture which has been much used for this entry.) Since writing it M. del Pilar Caldera Castro's article has been received, and although the present piece is extensively discussed, it has not induced changes.