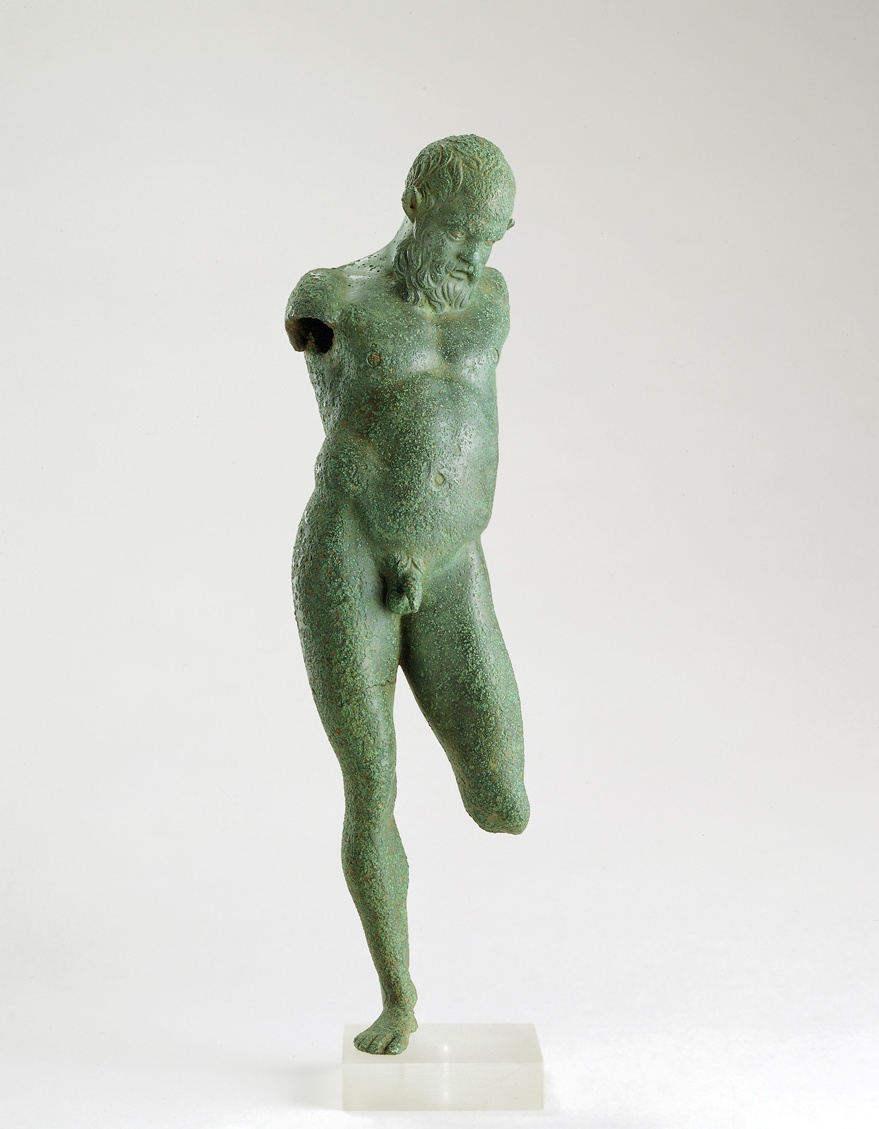 Hollow-cast by the lost wax method, the lower legs possibly solid. The left arm separately cast and fusion-welded to the body; probably also the right arm but attached below the shoulder. The tail possibly made separately and fusion-welded on. Carefully cold-worked, burnished and polished. The eyes of silver, the inlay for the irises missing; the nipples also once inlaid in copper (?).

Condition: patina a smooth light greyish green here and there, though most of the surface has been seriously pitted and abraded by cuprite and green chloride creating a very mottled surface. Missing: the left arm, the right arm below the shoulder, the left leg below the knee as well as the tail of which only a stump remains; a crack on the inside upper right thigh ending below the buttock. The back of the head flattened.

Looking down, his horse's ears sticking out, paunchy and balding, the satyr stands with his weight on his back foot. Since Archaic Greek times satyrs were shown in innumerable poses: in bronze, marble, and terracotta statuettes and illustrated on vases. For two earlier Greek satyrs see cat. nos. 113, 114, where not only are they represented full of spirit, but embody a symbolic meaning. Later examples, such as the Hellenistic bronze, cat. no. 170, and this figurine fulfil a purely decorative function.

A revealing comparison is the example in the Bastis Collection. For though the stance is very similar, details and spirit are strikingly different. The Bastis satyr is a late Hellenistic original [1] in baroque style, whereas our statuette is Roman, as shown by the classicizing execution and his inlaid silver eyes, typical for Roman works from Pompeii, Herculaneum, and elsewhere.

1 Oliver, A. : Antiquities from the Collection of Christos G. Bastis (Mainz, 1987), no. 110, p. 198; here dated as 3rd or 2nd century B.C., in part substantiated by comparison with a Herakles in Jerusalem excavated at Samaria and datable before the city's destruction in 107 B.C. We agree with the comparison, which gives a terminus ante quem towards the end of the 2nd century B.C. but does not justify a much earlier date.