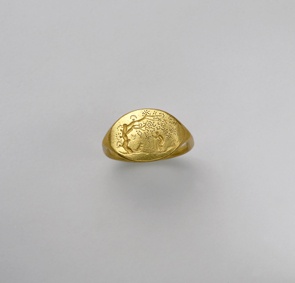 The bezel cast in gold - the scene extensively cold-worked - and the band drawn, hammered, curved and annealed to it.

The scene is a landscape, a genre found in Roman wall-painting. On the left a tree, its trunk broken, rises from uneven ground indicated by an undulating line, its two vigorous branches and their offshoots covered in rich foliage extending over the whole. Alongside the trunk four small bushes or flowers with petals, another above the top branch, and at the foot of the tree a dog on its haunches faces an old man hatted and cloaked as he approaches, stooped and helped by a staff in his left hand. Behind the old man on a mound a sixth small bush or flower
with petals.

Whether the idyllic scene is purely decorative, gratuitous and for the viewer's pleasure or has a specific meaning, is uncertain. If allegorical, it may symbolize the contrast between advanced age and approaching death represented in the figure of the old man and life exemplified in the flowering tree. The dog may be waiting to guide his master to the other world.