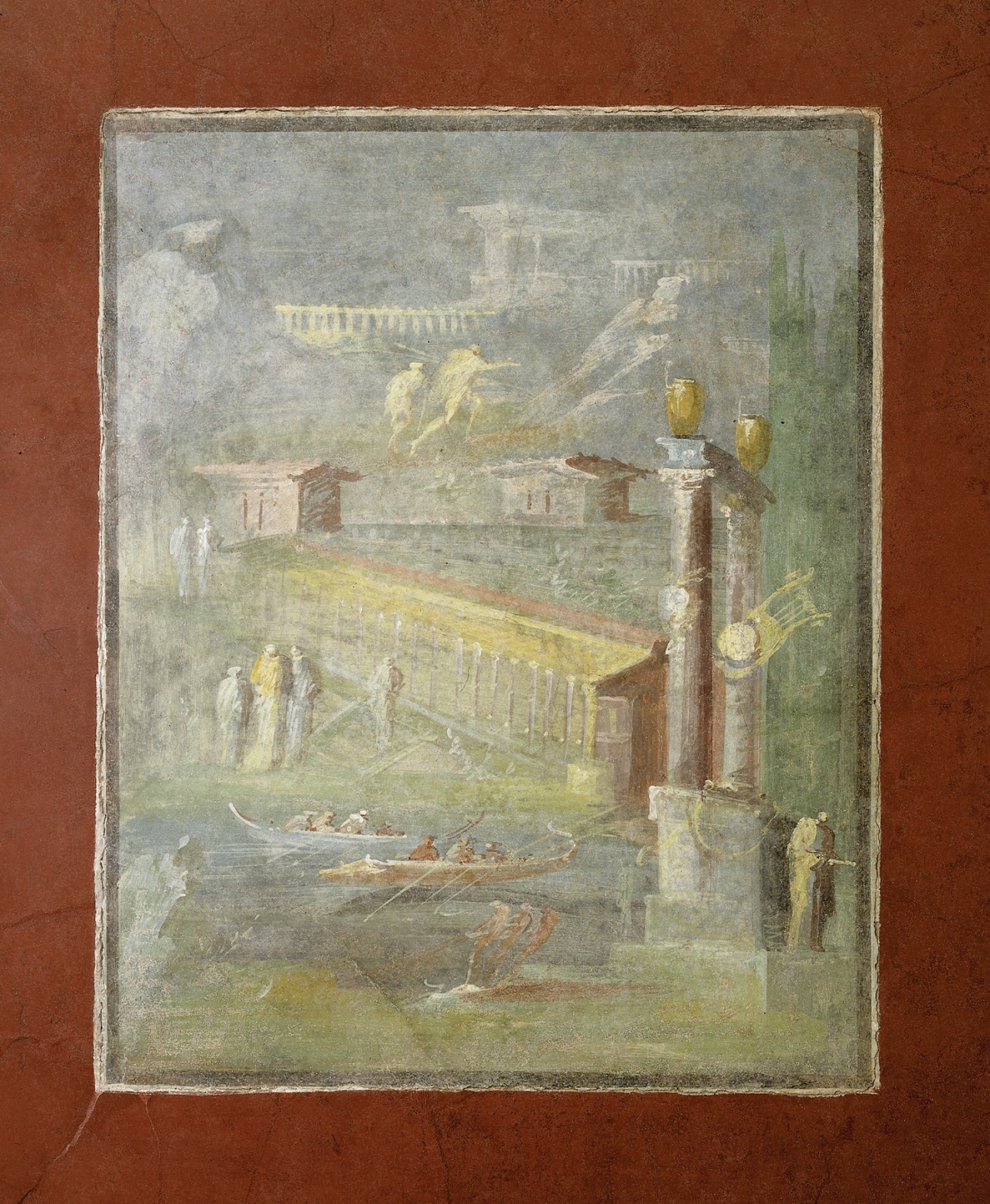 Painted by the fresco technique [1], the first layer may have been the greyish-blue of the border and it would have been burnished, thus bringing out moisture, enabling the multiple impressionistic brushstrokes of the scene using a great variety of colours, subtle shades: pale blue, green and grey, pink, yellow, reddish brown, white. The surface was afterwards polished. The central panel still surrounded by parts of the background wall whence it came, a red colour with a high burnish and polish.

Condition: very good. The scene itself with a few narrow fissures, a horizontal sliver about 10 cm long and 2-3 mm wide missing below the feet of the two upper figures and retouched in tratteggio [2]. A crack runs the full length of all four borders along the narrow white band [3]; the surrounding wall parts fissured here and there, touched up in tratteggio.

The panel has undergone restoration [4] and has been thinned down at the back so that the thickness of the original is presently about 1 cm embedded in the modern backing (nylon cloth with cellulose stucco).

The interpretation of the various scenes in this sacro-idyllic landscape is somewhat difficult: a portico, two figures at one end and four figures in front, a jetty, on a stretch of water a race between two boats each with three oarsmen, three figures on a third boat drawn up on the water's edge hauling up a net with a large fish (?); on the right a pedestal with two columns hung with a lyre and a ram's head [5] and surmounted by an architrave topped by two large vases, on the far right a figure sacrificing and tall cypresses; above the portico two smaller buildings and two hunters bounding towards an "acropolis".

A good parallel is a panel from Boscotrecase [6] for many of its features and accessories: the two columns also decorated with motifs, surmounted by similar capitals supporting an architrave on which two vases. A. Barbet informs us that it is of considerable size and the scale completely different. Thus, though the treatment is similar as she agrees, it is close but not identical, and she adds that it is to be dated to the early part of the Third Style, 11 B.C. Another panel [7] from the same villa is, she points out, of the same vocabulary but not the same treatment. We find a similarity for the figures, the triremes and the buildings with a panel from Stabiae [8] which A. Barbet tells us belongs to the Fourth Style and bears analogy for the brushwork. She suggests that the closest parallel is a painting from Pompeii [9], from the Casa del Sacerdote Amando, a landscape with Polyphemus and Galatea which is of the Third Style in its ripe phase, A.D. 35 to 45.

Executed in a fluid and allusive Impressionistic manner in very light colours with the light coming from the left, the landscape bathes in an aura of poetical mysticism.

For this entry we are much indebted to Roger Ling, Roman Painting (Cambridge, 1991), chapter 10, Technique, and to Mrs. Alix Barbet for the trouble she has taken to enlighten the author who assumes all responsibility for any errors.

1 This implies painting on damp plaster, the plasterer working alongside the painter. The wall is covered with various layers depending on the quality of the execution; the lower layer(s), rough plaster (arriccio), a mixture of lime with sand or powdered pottery and fine gravel, the top layer(s), a finer and more compact plaster (intonaco), powdered limestone, marble dust. The layers went from thick to progressively thinner for two practical reasons: firstly to convert the rough surface of the wall to a fairly flat even surface, secondly the thickness retained its moisture much longer and once the painting was finished as the wall dried out from the back to the front it helped fix the painted surface as certain elements were brought to the fore.

2 Modern School of Rome scientific method of restoring ancient frescoes: the missing parts are filled, smoothed and then touched up (a reversible procedure) by means of watercolour applied with vertical brushstrokes giving a harmonized visual effect from afar but visible to the naked eye from close to. More recently and for Augustan-period paintings whose surface is burnished, watercolour is applied in a myriad of pinpoint dots, a sort of very closely-knit "pointillé" (information verbally supplied by Alix Barbet on a visit 11 September 1993). In the present case, the restorer has made an exception to the rule by using both vertical and horizontal brushstrokes.

3 The artist who painted the scene would not have been the one to paint the surrounding wall; the fissure indicates that the panel corresponded to a "giornata di lavoro", that is a section to be done in one session.

5 We are grateful for this indication given us by Alix Barbet on a visit 11 September 1993. The two representations on the column might be a suggestion for the cult of Apollo and Mercury.