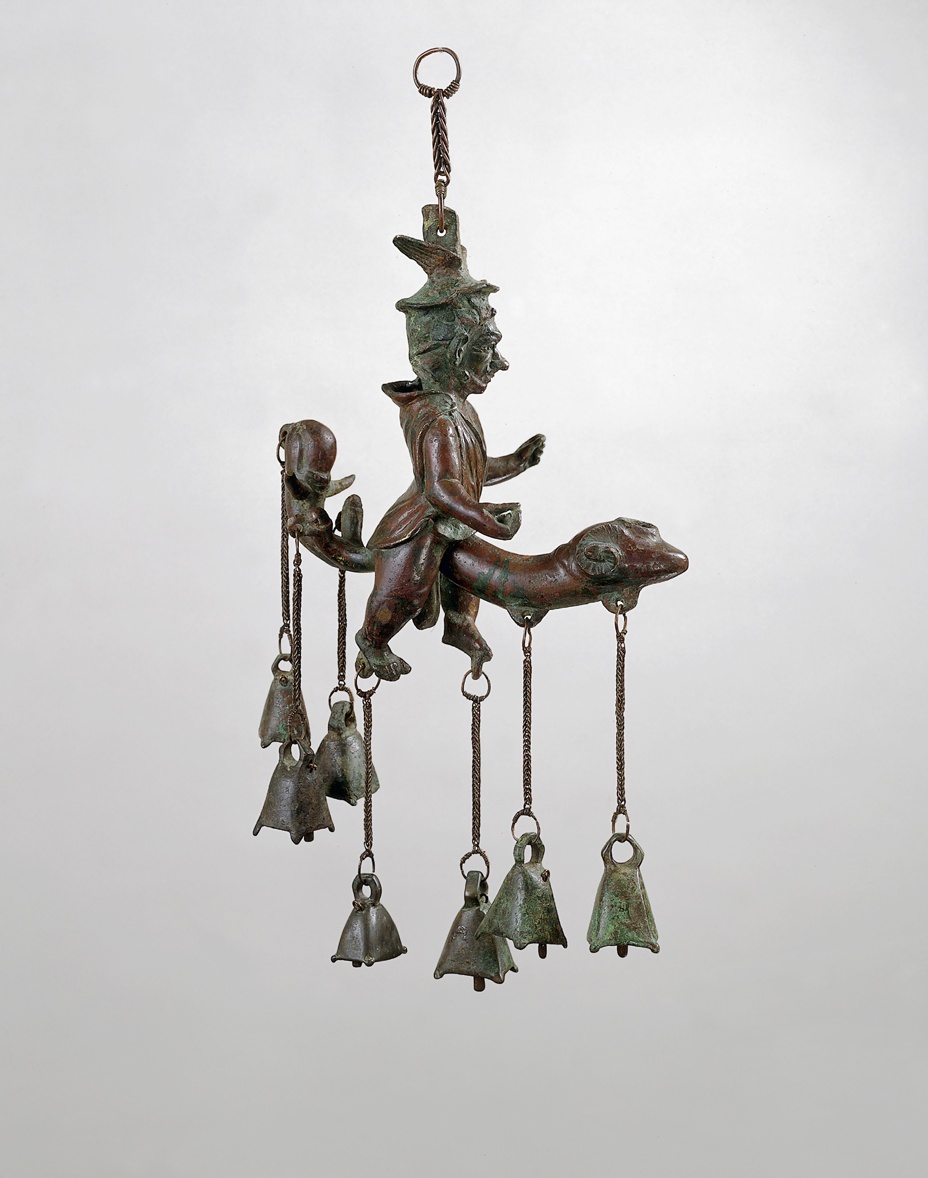 Cast by the lost wax method in several sections: the head, the body and both phalluses. A long rectangular patch on the left leg. Cold-worked and burnished. The chains made separately of tressed and coiled bronze wires, the bells cast and fitted with a forged iron clapper held in place by a bronze loop.

Condition: surface presently a reddish purplish brown, green to dark green in parts, the yellow bronze showing through here and there. A crack below the neck. Restored and cleaned, evidently once thickly covered with oxide and chloride incrustation which has been manually cut away, the front phallus possibly reattached.

The figure has an opening at the nape, through which the lamp was filled with oil. In front, an oversized phallus ending in a ram's head with a round hole for the wick between the horns. From the rear emerges another phallic construction with horns and near its base project two smaller phalluses. The dwarf wears a winged petasos from which juts up a pierced tang enabling suspension by means of a tressed chain, his hair encircled by a wreath of ivy leaves tied at the back with a fillet, two knobs protrude from his forehead and two warts from his face; from the phalluses and from under his feet seven bells dangle on chains.

This writer feels that his physiognomy is more in keeping with the Alexandrian models of the Late Hellenistic period, possibly indicating an Alexandrian origin, though the object may very well have been made in the Pompeian region.

Such representations were wont to be suspended in Roman villas to bring good luck and give magical protection against evil spirits; maybe this example hung at the entrance of a cabaret or lupanar, the ringing bells announcing a visitor. Among comparisons are two tintinnabulain Naples [6], one in the form of a gladiator.

The author is indebted to O. Neverov for the collection history of this item. It was revealed during a small symposium, organized for their members by the departments of ancient art, that took place on the morning following the closing of the exhibition of the George Ortiz Collection at the Hermitage Museum. Papers were given and published in Russian in a booklet entitled "Hermitage Readings" with short résumés in English, French and German.

1 His dates: 1716-1788. Responsible for excavation of Herculaneum and Pompeii.

3 His dates: 1751-1825. Third son of Charles VII, he succeeded to these thrones of Naples and Sicily on the abdication of his father in 1759. He became Ferdinand I in 1815 when the two thrones were reunited as the Kingdom of the Two Sicilies.

4 Received as diplomatic gift from Ferdinand IV of Naples in 1803, when Napoleon Bonaparte was still First Consul. In the Spring of 1801 discussions were begun among the King's advisers regarding the French excavations and their representatives which resulted in 123 objects from the Royal Museum of Portici being given to the Malmaison, among which the tintinnabulum. The Malmaison and its contents were given to Josephine de Beauharnais as part of her divorce settlement in 1808.