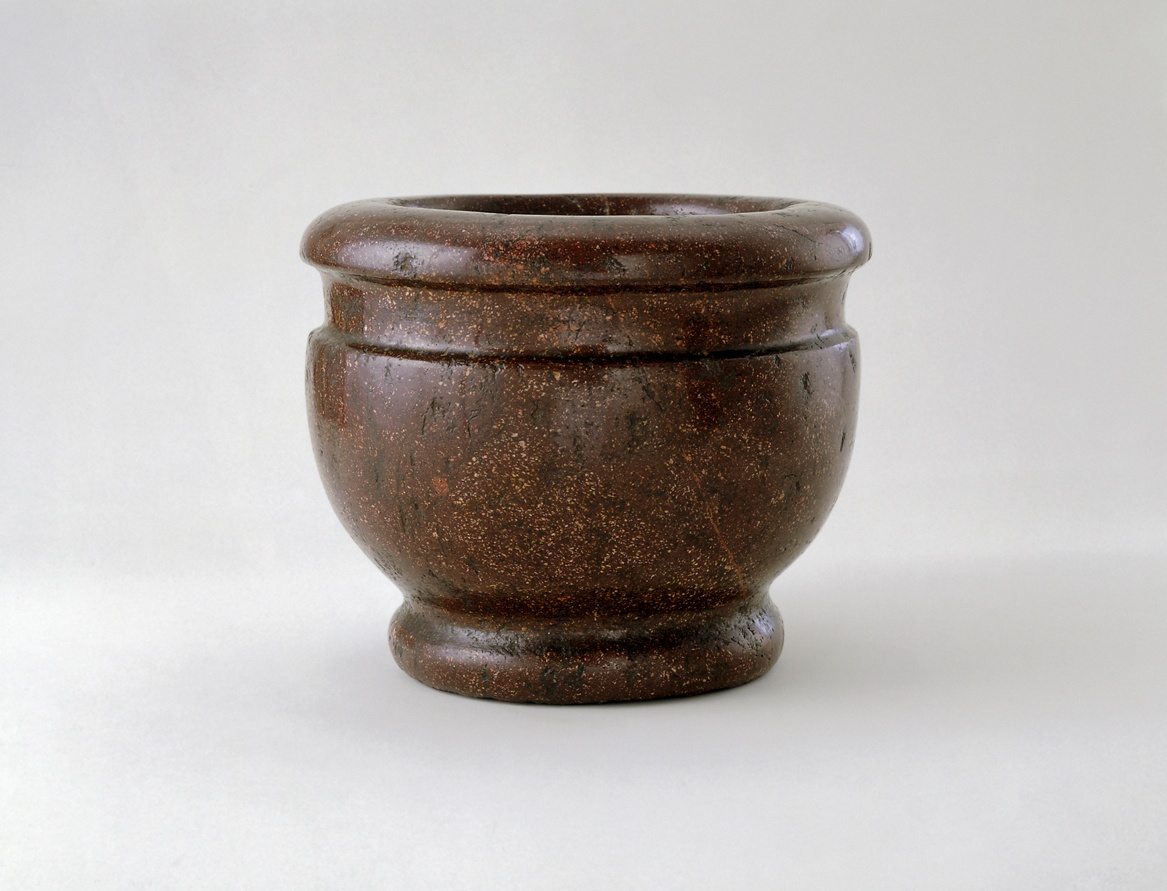 Made from a block of porphyry hollowed out and shaped, using various tools with the help of abrasives and water.

Condition: the colour a rich red brown with light pinkish speckles; the whole surface once highly polished, now nicked and chipped and the inside surface somewhat worn.

Particularly satisfying for the simplicity of its shape and execution, harmonious in form and eminently adapted to its function, this vase was probably used as a mortar. However, its date and place of manufacture remain a problem. As with many utilitarian items, however much sought-after with today's taste for simplicity in form and function, such products have proved throughout the ages of little interest historically either to scholars or collectors. This, and the lack of examples from archaeological sites add to the difficulties. Such scholars as Delbrueck [1], who studied the material, usually confined themselves to elaborate vases that were favoured in imperial circles. Two of these in the Palazzo Doria [2] , taken for antique, are in this writer's opinion more likely to be late Renaissance. Simpler shapes, illustrated by the same scholar, such as a mortar in a private collection in Bonn [3], tentatively dated to the 4th century (?) and allegedly bought in Cività Castellana, and another from a princely collection in the Albertinum in Dresden [4], dated to the 2nd century (?), give no foundation for attribution.

A porphyry jar with cover in two parts, unique to our knowledge, appeared at public auction in 1967 [5] as having been acquired in Egypt. If Egypt is indeed the find-place, it would be strong evidence for ascribing these types to a Roman context. And if the above mentioned three vessels prove to be of Roman date, there is no doubt that our example is also Roman. However, it would seem that most examples described as Roman, with the exception of elaborate vases, are rather small, delicate vessels, similar to examples in semi-precious stone, as evidenced by fragments from the Tiber [6].

All porphyry, in whatever form that has survived, was quarried from Mons Porphyrites in Egypt, exploited by the Romans between the 1st and the 5th centuries A.D. A valuable and much appreciated material, it was reused throughout the centuries. Simpler forms served functional purposes, mortars for kitchens or medicinal use from Roman times well into the early Medieval, when they were also favoured for church use as baptismal and holy water fonts. A porphyry urn with slender tapering body and short straight neck with upright loop handles appeared at Sotheby's in 1969 [7]. Its finish indicated that it was made for certain of its parts - foot, mouth and handles - to be enriched with metal; whether of Roman or later date is uncertain. A similar vessel, but of better workmanship and finer finish, is the vase with silver gilt mounts (foot and mouth) that belonged to l'Abbé Suger in the Galerie d'Apollon in the Louvre [8].

A famous workshop flourished in Norman Sicily. The earlier Byzantines monopolized Roman porphyry for the embellishment of the churches and palaces of Constantinople, which were used as a much appreciated source by the Venetians. During the early Gothic period and the following centuries, the façades of Venetian palaces were adorned with porphyry tondos and hexagonal and octagonal panels. Princes in the Renaissance and the kings of France had porphyry column drums recarved into imposing vases. In conclusion, though there is a strong chance that our vase is Roman, it could just as likely be a Byzantine or early Medieval vessel.

5 Author's collection. Sotheby's, 24 April 1967, lot. 70, said to be from the collection of the Earl of Ashburnham and acquired
in Egypt.