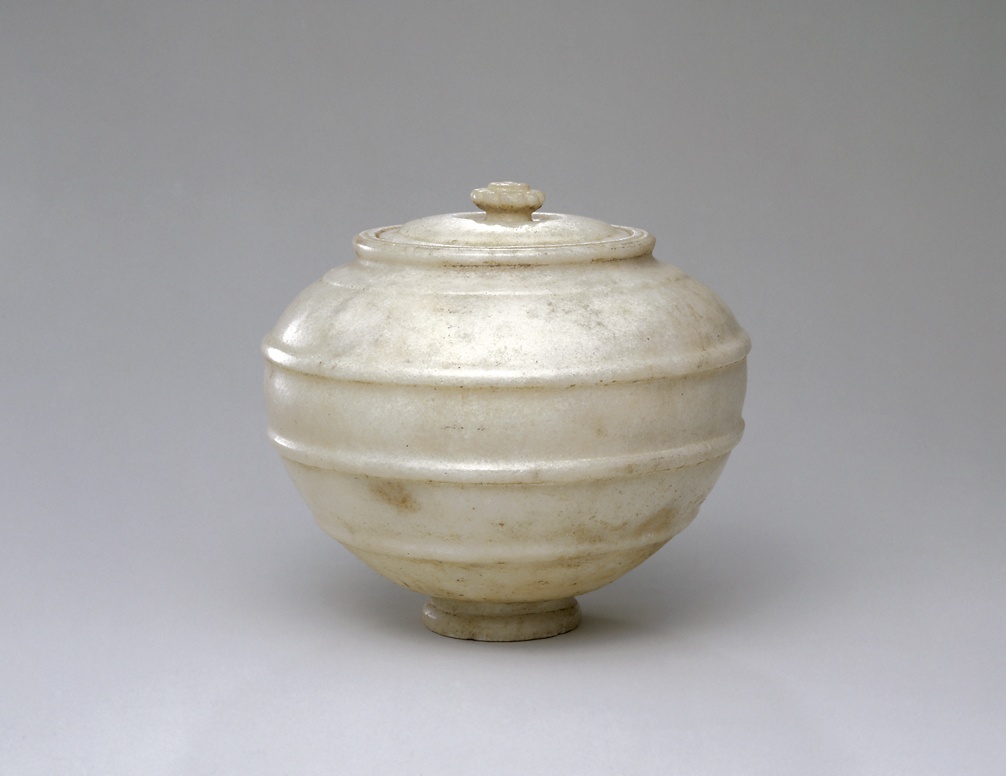 Made of an originally crystalline white marble [1] with the help of a lathe and highly polished.

Condition: near the foot traces of hard brownish limestone deposit which probably covered the whole vessel which seems to have been cleaned in modern times. The present colour a warm ivory with a greyish hue. The odd nick to the lid and one of the "petals" of the rosette knob broken away with parts of the adjoining "petals". Several nicks to the lower edge of the foot.

The body of the urn has three concentric ribs, a wide ridge on the shoulder; the top of the mouth of the vessel with a groove on its circumference. The lid with a narrow flat outer rim slightly curves up to dip in the centre, from which rises the rosette knob with thirteen "petals", a round flat button on top divided into four equal segments and pierced by a central point.

For many years the author has searched for a parallel. He even wrote to several scholars [2]. However, notwithstanding the failure of all these attempts, he remained convinced of the unquestionable authenticity of the vessel and its appurtenance to the Roman world, probably from its eastern provinces and possibly from Egypt. In December 1993, a friend [3] sent him a photostat of what appears to be an identical pot [4], but slightly larger and unfortunately with the lid missing. Uncannily similar in detail, and the bad photostat notwithstanding, the comparison is totally convincing. The pot comes from Ockov in the district of Trencin and is described as an "Alabaster vase-urn. The globular slightly asymmetrical body of the vessel is separated in three horizontal sections by concentric grooves [5]. Low cylindrical foot. Maximum height 27 cm, maximum diameter 34.2 cm. An import from the Mediterranean region. 3rd century A.D." The vase belongs to the Archaeological Institute of the Slovakian Academy of Sciences.

The following additional information [6] is conclusive: the parallel is an alabaster or marble urn from tomb 222, a real ossuarium - to be dated by its contents [7] around the first half of the 3rd century A.D. - from the necropolis of Ockov, where most of the tombs were urn burials, in use from the second half of the 2nd century until the beginning of the 5th century A.D. The indent on the mouth, identical to the one on our example, was to enable the lid to inset and T. Kolnik concurs that this may be assumed. He adds that "all the other urns in this Germanic necropolis of Ockov were terracotta vessels most of which were hand-formed." Close by, grave no. 208 contained a precious terra sigillata urn confirming that "these graves certainly belonged together and represented a higher social stratum in the given milieu, perhaps traders." He adds that not far from the Ockov necropolis at Straze-Krakovany Germanic princely tombs - containing rich Roman imports with silver, bronze and glass vessels - were discovered, of which the corpse burials are among the richest Germanic graves of the 3rd century A.D. throughout the whole of Free Germania.

T. Kolnik concludes his communication to the author stating that the present urn must have fulfilled a same function also "in a period in which cremation was the customary funerary practice in the Roman Empire" and concurs that both urns were certainly from a workshop in the eastern Mediterranean, are absolutely authentic and that the suggested date is correct.

1 Examination by magnifying glass confirms that the crystals are marble.

2 For this urn as well as for the porphyry vase, cat. no. 241, our thanks to Margherita Bolla of Milan who sent us bibliographical references; to Catherine Metzger of the Louvre who unfortunately knew of no parallels; to the Römisch-Germanisches Zentralmuseum in Mainz who sent some bibliographical references; to the Rheinisches Landesmuseum, Trier where Karin Goethert kindly wrote on 30 July 1992, saying "we think that your two marble urns are not Roman ..."; to Ellen Reeder of the Walters Art Gallery, Baltimore who supplied some bibliography.

3 Michael Ward, New York, to whom we had mentioned our urn in the past ad who had just acquired the publication from a visiting citizen of an Eastern European country.

5 Whereas on our example these are ribs. This is a working detail of importance: for to groove is far less work than to have to work away a layer of surface to produce ribs in relief.

7 These were "the cremated body of an adult of indeterminate sex with the following grave offerings: a simple bronze fibula with foot bent back; fragment of a terra sigillata vessel from the Comitialis workshop from Rheinzabern in the Rhineland or Westerndorf, dated between the late Antonine and early Severan period; fragments of a comb made of bone and so-called 'urn resin'".

The author is deeply indebted to Mrs Olivier Maus, Consul General of the Czech Republic in Geneva, and to her assistant, Mrs Mahula Slama, for all their efforts to contribute information and establish contact between the author and the Slovakian Academy of Sciences.