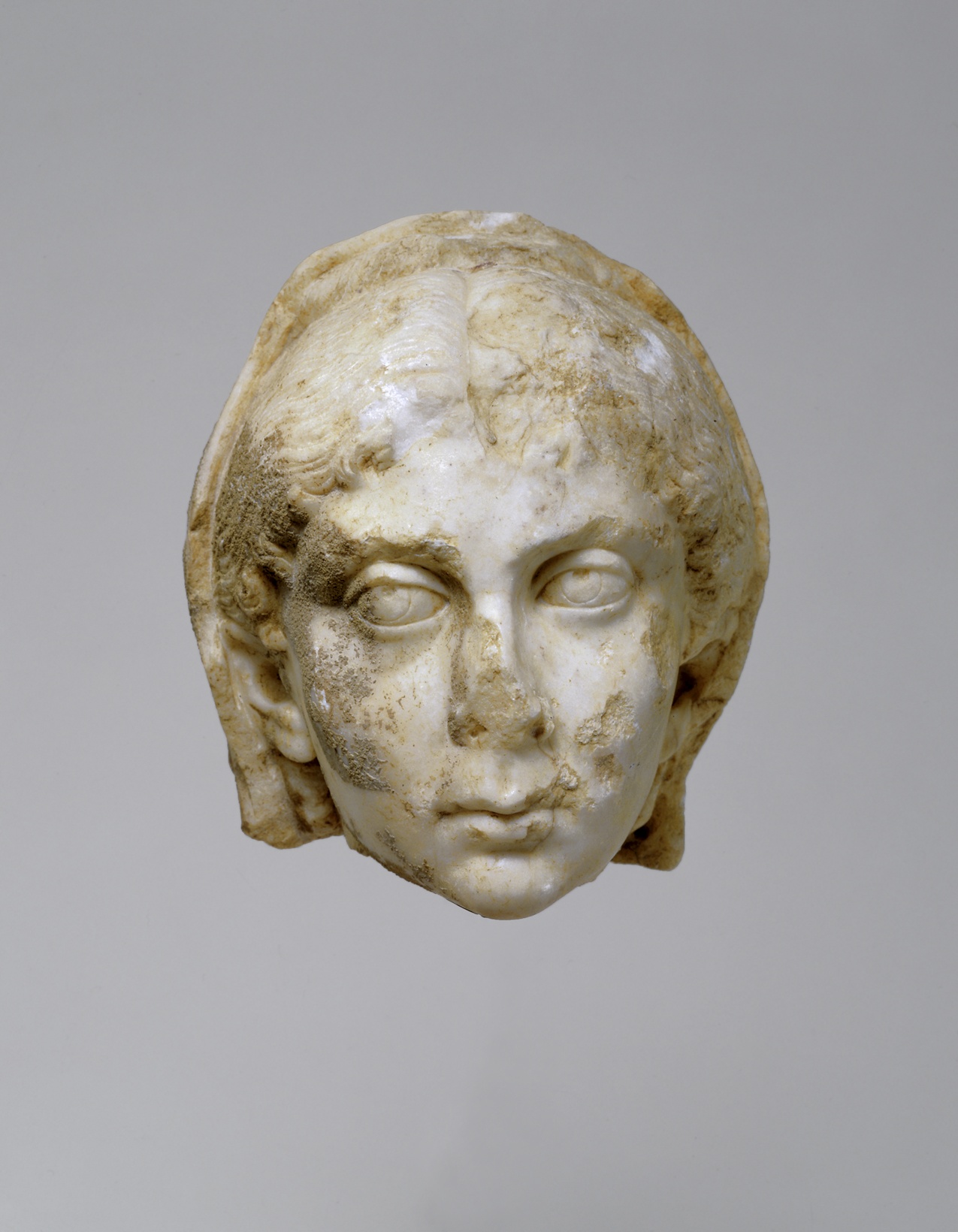 Made of an originally fine-grained white crystalline marble. The face carefully polished as well as the veil on either side, left rough on top and at the back.

Condition: the head's surface a pale to warm yellowish ivory hue with thick rough earth-coloured limestone deposits on its right side and back. Broken at the neck, the face and hair heavily chipped and flaked.

Since calling her a priestess in the Russian catalogue, we are beset with doubts. The type of veil she is wearing would be suitable for various occasions, and for ritual reasons the covering of the head was required in many Roman ceremonies. Thus this element of costume could befit a priestess, a mourner, a person sacrificing, a bride, or a matron. Under the veil one distinguishes a large plait of hair drawn up from the nape and ending on the crown of the head, illustrative of a hairstyle which first became fashionable in the 240s. To be in fashion could be expected of a bride; however, the age visible in the face of this portrait inclines us to discard the possibility of this identification.

In Gesichter, a date in the Post-Gallienic years around the middle of the second half of the 3rd century was suggested by the stylization of the face ("abstract contruction" and "spiritual expression") in contrast to works of the middle of the century. Supporting this assessment, a comparison is made with the Annona sarcophagus in Rome [1] drawing attention to the stylization of the face of the central female figure and suggesting that they have a similar physiognomy. However, we do not share this interpretation. Both the slight turn of the head and the gaze of our example are still close, in our opinion, to the Severan period.

The very strong character and spirituality of this portrait is, we feel, due to the sitter, and would be in keeping, may we suggest, with a great Roman matron. She may have been the wife of an important official, in charge of running a large household, full of children, servants, and slaves, always ready to second her husband in his political and social functions. We observe the permanence of such character in great women and see in her the same spirit that infuses the squatting female of the little Sumerian bust of some three thousand years earlier, cat. no. 2.

This entry is much indebted to H. Heinrich's text for the catalogue Gesichter.