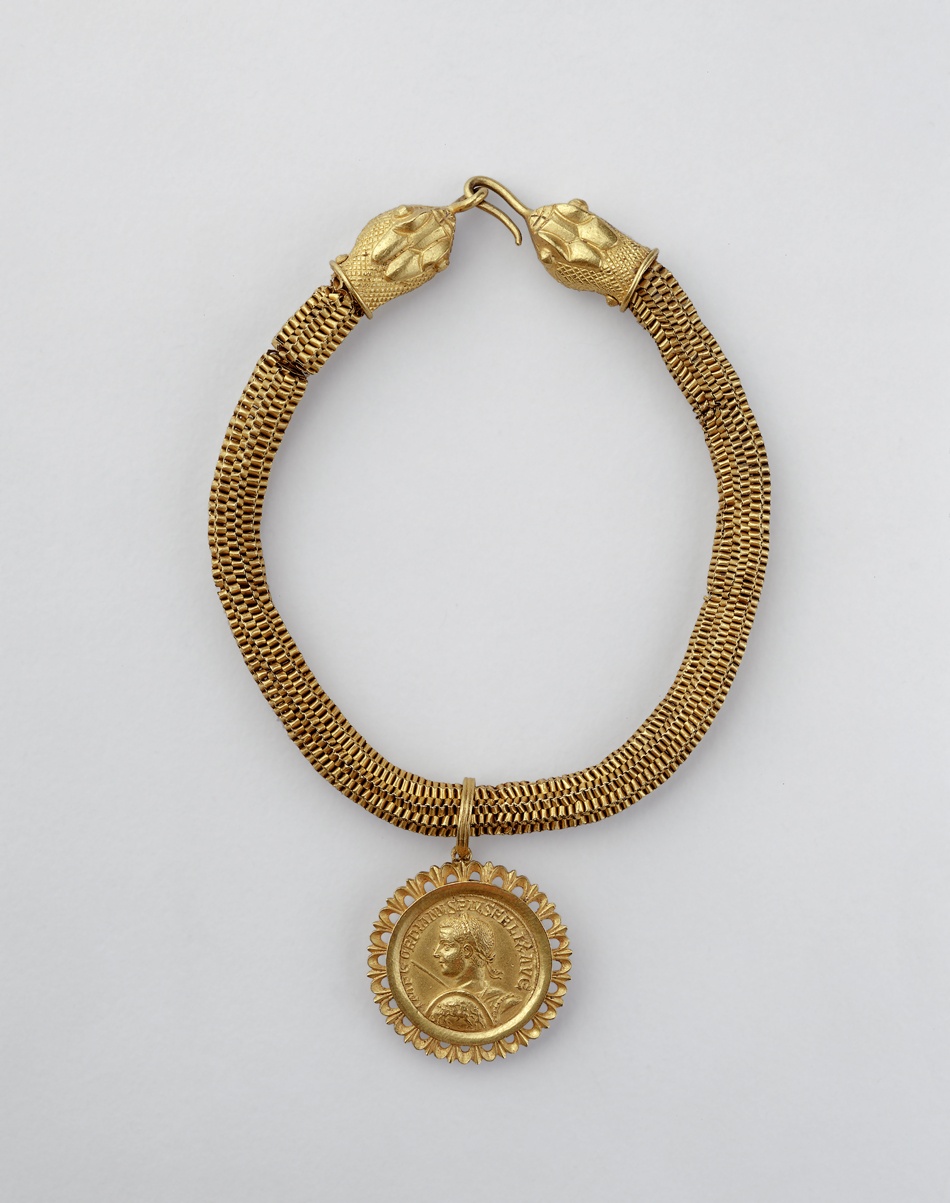 The gold medallion struck from dies; its frame cast, cut, hammered, chiselled and burnished. The necklace is a chain composed of intricate layers of interlocking foil made from gold strips hammered and cut, at its extremities two snake protomes, repoussé, hammered, chiselled, and worked in and out from gold sheet; a gold wire fusion-welded to the edge of the necks, in front of which a round-headed pin on either side secures the chain. A thick, round wire section protrudes from the mouth on one, formed into a loop and fusion-welded to it, and just above on the other, formed into a hook. The medallion hangs from the chain by means of a thick, ribbed gold strip that is hammered to a pointed hook at one end and at the other to a wire that goes through a small section of ribbed gold strip folded over into a cylinder and soldered onto the edge of the mount; as the wire comes out it is coiled around like a spring which fits over the hook. Thus, in antiquity it was very easy to unhook the loop and slide the medallion off it or pry open the loop, freeing it from the chain.

Condition: the medallion in mint condition, the mount reset on the back and minor restoration to the chain where slightly damaged in four places.

Medallions to mark significant events, such as this, were struck at the imperial mint in Rome as presentation gifts for important officials. Emperor Gordian III (ruled A.D. 238-244) accompanied by Timesitheus, prefect of the guard, led his army across the Hellespont on his way to Syria at the onset of his campaign against Shapur I, the Sassanian king.

The obverse of the medallion shows Gordian as a victorious warrior with spear and shield, the latter decorated with a scene of the emperor on horseback accompanied by two winged Victories in the act of crowning him. An abbreviated inscription reads: IMP(ERATOR) GORDIANUS PIUS FELIX AUG(USTUS). The reverse depicts the sea crossing at the Hellespont, with the inscription TRAIECTUS AUG(USTI)--"the crossing over by the Emperor". Several other related medallions with the same reverse (most in bronze) have survived [1], but this is the largest and finest so far known.

The medallion found its way to Egypt, known for being a wealthy province, and it was probably there that it was set in an openwork mount to enable hanging on an elaborate chain ending in snake heads. A comparable necklace, but ending in lion heads, is in Baltimore [2]. The chains composed of layers of intertwined gold bands, which produce wavy surfaces, are so juxtaposed with each other that they throw off a shimmering light.

Snake heads of very similar style and construction are to be found on the ends of two gold bracelets: one in the British Museum [3], which also happens to be from Egypt, and another in Berlin [4], but without a provenance. It would seem that all the above examples belong to the 3rd century A.D. and suggest that the necklace and the mount are almost contemporary with the medallion.