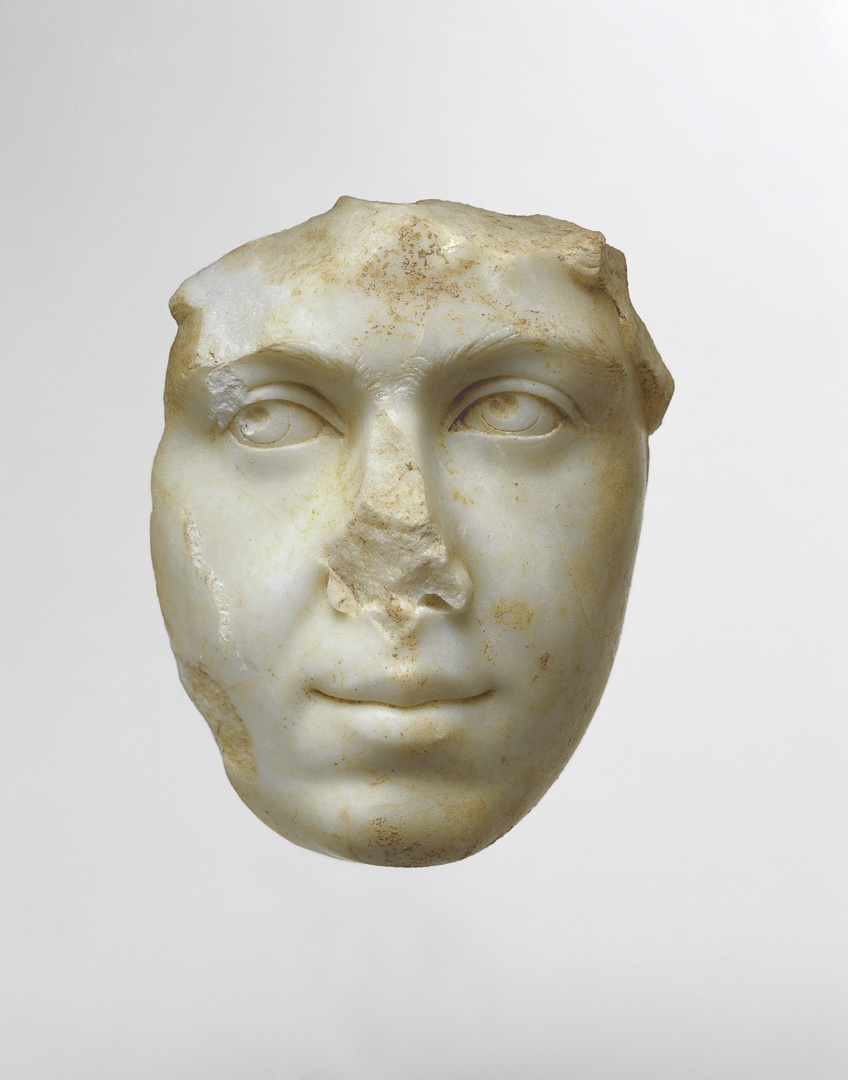 Sculpted in a fine-grained white Carrara marble and finished off with a high polish.

Condition: the face sliced off the head where it meets the neck and broken across the forehead but still retaining traces of hair above the temples. Missing: both ears and much of the nose, part of the right eyebrow with a large chip above; abrasion to right eye and eyelid and to right cheek and lower right jowl. The surface a shiny mellow white with traces of limestone deposit leaving brownish red stains where worn off.

This face from a portrait head and its twin in Bochum [1] were reputedly found in Italy together with the mutilated head of Alexander Severus and fragments of his bust. Alexander Severus became emperor in A.D. 222 at the age of thirteen. At that time, his mother, Julia Mamaea, assumed the regency with full powers, bearing the resounding title "Mother of our most sacred lord ... Mother of the armed forces, of the Senate, of the Country and of the entire human race". Though under Alexander's rule the country had known fourteen years of peace "with no evil or bloodshed as far as his subjects were concerned ... he was known for his gentleness and good deeds," he was weak, cowardly, and rather lazy. Apparently, it was the overbearing personality of his mother and her "petty minded greediness ... that brought shame upon him". At the beginning of a campaign in Illyria to stop the incursions of the Germanic tribes from the other shores of the Rhine and Danube, Maximinus, whom Alexander had put in charge of the army, rallied the troops around him, seized power, and had the emperor, his mother, and all his partisans murdered.

The twin heads of Julia Mamaea display a gaze directed towards the upper right in contrast to the serenity of the face and the simplicity of the hair-style, which is a stylistic trait of the period. This marble portrait, with its lovely, polished surface, must be identified as Julia Avitia Mamaea based on the large number of replicas (more than two dozen) and the resemblance to her coin portraits. The only other possibility would be that they represent Orbiana, who was the wife of Alexander Severus for a short, two year period, A.D. 225-227. However, since coins of Orbiana are rare and she was repudiated by the emperor, the identification is to be dismissed. Though it would seem that neither the emperor nor his mother were the subject of a damnatio memoriae, most of their effigies were wilfully damaged, suffering axe or spear blows obviously directed towards the heads. It is noteworthy that the three faces of this group show broken noses, blows, damage to the emperor's eyes, but not to the eyes of Julia Mamaea save for the slight abrasion to the right eye of this portrait. The damaged condition of these three marbles must result from intentional desecration.

Her portrait exalts her beauty without revealing the nasty side of her character, as related by Herodian.

1 Gesichter, cat. no. 73; Kunisch, N.: Bildnis der Julia Mamaea, Jb Ruhr-Universität. Bochum, 1982, pp. 11-17. For this entry we are considerably in debt to Dr. Kunisch's paper, in which he very thoroughly treats the twin portrait, substantiating the attribution and relating in detail the historical context by quoting extensively from the sixth book of the History of the Roman Empire by Herodian of Antioch.