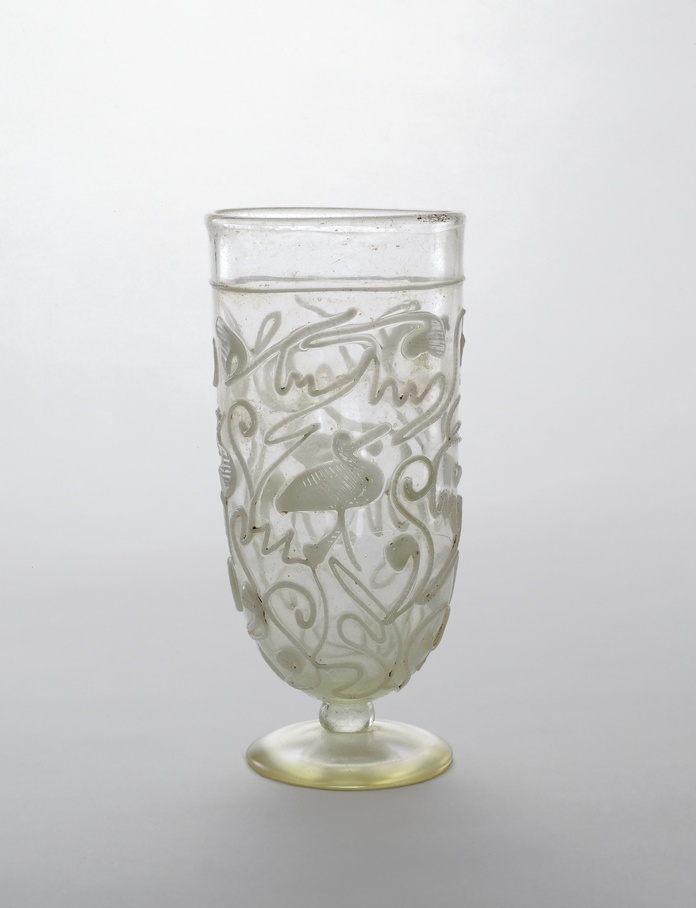 Condition: the foot a modern repair; a crack around the lower body consolidated with transparent glue. Slight dulling to minor parts of the colourless glass owing to weathering.

The trails depict waders in a poetic representation of reeds and vegetable growth (along the banks of a river, symbolized by the movement of the liquid contained in the goblet).

Most [1] snake-thread glass has been found in the region of Cologne in the Rhineland. Though first produced there by migrant workers, with gradual improvements and refinements added as time went on, the type originated in Syria and Alexandria. The author knows of no examples from Cologne decorated with birds. For a comparison, there is a bottle with birds in Düsseldorf [2] ascribed to Syria and dated to the first half of the 3rd century A.D. However, it is to be noted that the dissimilarities probably indicate a different workshop: the greenish hue, the trails in opaque yellow and the execution of the trails and hatchings.

The present goblet seems among the earliest products of this type. Its alleged provenance and what appears to be the inspiration of the Nile and the natural life on its banks render both an attribution to Alexandria [3] and an early date plausible.

Exhibited :
Glass of the Caesars (horscatalogue)

3 Several months after this entry was written, Prof. von Saldern kindly sent the author a xerox of a paper by Dan P. Barag ("Flower and Bird" and Snake-thread Glass vessels, Annales du 4e Congrès International d'Etude Historique du Verre, Ravenne-Venise, 13-20 mai 1967, pp. 55-66) and the author was comforted to read (p. 57) that Barag agrees with Harden's fourth possibility that such "ware was first made in the East and was introduced almost at once to western workshops by migrant artisans" and that "snake-thread ware, both monochrome and polychrome, was made in Egypt, presumably Alexandria, during the second century A.D."