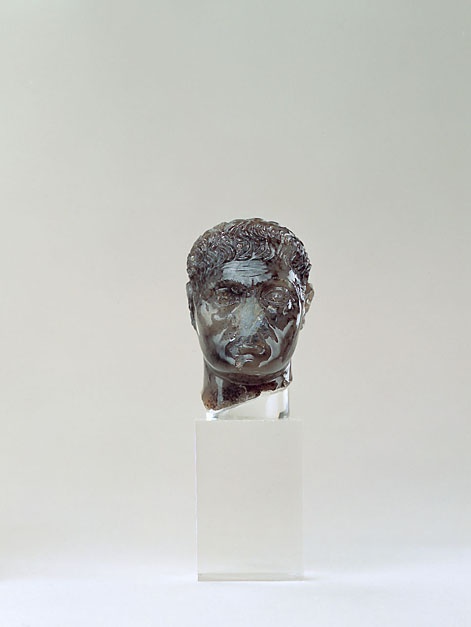 Carved in chalcedony [1] and finished with a very high polish.

Condition: broken on a slant at the neck, the nose broken off, the upper lip abraded, a chip to the right of the mouth and right side of the chin, the left ear chipped, the right ear levelled down. The colour a variety of shades on a light grey to brownish grey base with the odd white speck.

Small imperial portraits of semi-precious stone of different varieties of chalcedony, rock crystal, aquamarine, and turquoise were made since the time of Augustus [2]. They are most common in the 1st century A.D. but continued until the time of Julian in the mid-4th century A.D. How these heads were set or displayed remains an open question.

It had originally been suggested to the author that the little head could have been a portrait of Nero reworked in the time of Domitian, and possibly once again close to the time of the Tetrarchy. However, we can observe no traces of reworking, and the technique fits the Flavian-Trajanic period, as can be seen by comparisons with other miniature portraits of the time.

We think it most likely that it is a portrait of the Emperor Domitian [3], for whom the broad, square face with prominent chin and creased brow are fitting. Also indicative is the hair-style, with the hair brushed towards the front, as he wished to hide his balding pate. This fashion was adopted only by the Emperors Nero and Domitian, but Nero's portraits are particularly distinctive and differ from the features of our little head. The closest comparison is the marble head on a life-size statue in Copenhagen, which is described as having the features of Nerva, with the observation that it keeps the unquestionable traits of a reworked Domitian [4]. The attribution is uncertain. A small chalcedony bust in Paris [5] and a small bronze bust in Copenhagen [6], both ascribed to Domitian, seem to us to bear a resemblance.

1 Chalcedony is a more generic term than agate, which was used in the Russian catalogue, brought to mind by the souvenir of our master marble used for shooting marbles from school days; however, agate is a chalcedony with streaked colouring, whereas here the stone is mottled.

2 Megow, W.-R.: Kameen von Augustus bis Alexander Severus (Berlin, 1987), who lists numerous heads including portraits of Augustus, Tiberius, Claudius and many of Trajan. A late example is the chalcedony bust of Julian the Apostate (A.D. 361-363) in the Hermitage.

3 This had first been tentatively suggested to the author by R. Wünsche on a visit in June 1988. J. Spier concurs with this attribution and sees no reason to think that the head was either recut or is later in date than Domitian.