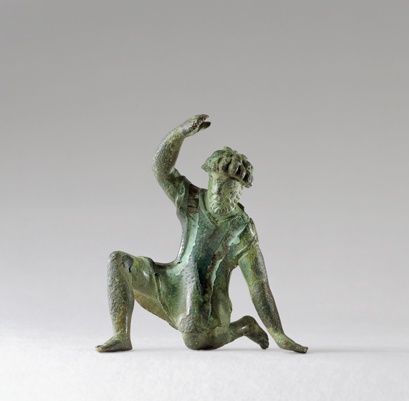 Solid-cast by the lost wax method, cold-worked, burnished and polished with two clavii[2] front and back running the length of the tunic, formerly inlaid in silver (?). A casting fault on the inside of the right knee repaired in ancient times.

Condition: patina a light to bright deep green, the bronze metal showing through in places; the surface flaked here and there. All the inlay of the clavii missing; the lower left leg bent, cracked, and the surface flaked; toes of both feet somewhat damaged, and tips of fingers on both hands missing.

This statuette is somewhat of an enigma, for though he appears to belong to the types that were part of baltei (see previous cat. no. 233) and notwithstanding close similarities for the position, gesture, and mood, he is different. He is also different in technique, as his tunic was inlaid with silver (?). His hair is wig-like, matted in thick clusters. Though with considerable differences, we see a rapport with a squatting figure [3], a weight, for the hair-style, though here composed of five superimposed layers of twisted curls carefully executed. The hair-style of our statue differs from that of the Nubian (?), as would befit a Celtic barbarian. However, they may not be too far apart in date.

Though our example was described as Migration period, 5th-7th century A.D. in the great Early Christian and Byzantine exhibition of 1947, we feel that it belongs more likely to the 2nd century A.D., as the previous catalogue no. 233, although it could be slightly later in date. For the dress, the short tunic he is wearing, and both for the stance and subject, a vanquished barbarian in submission imploring for his life, he resembles the figures from baltei, but being in the round he could not have come from one. However, he may have belonged to a similar type of scene and have been part of a group entirely in the round.

1 According to the entry in Early Christian and Byzantine Art.

2 The above catalogue, footnote 1, states "the clavii inlaid with silver, partly vanished." Unfortunately, today, there are no traces of it left.