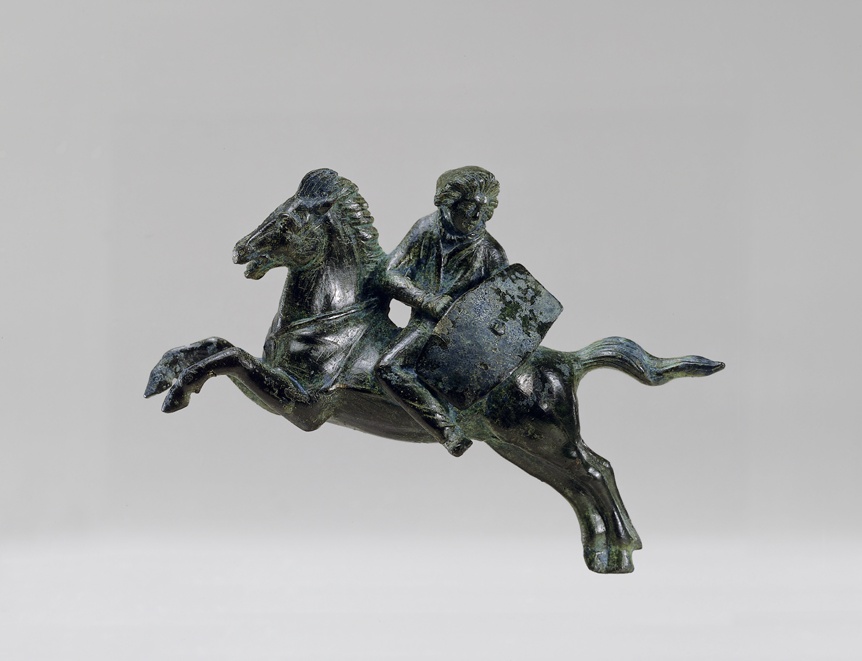 Solid-cast by the lost wax process with the horse's body left hollow. The back, left rough, with tool marks from the wax visible on the right side of the horse's neck and hind legs.

Condition: patina a bright shiny to dark green overlaid in parts with an azurite carbonate. A nick to the shield.

Appliques such as this, which hark back to Hellenistic battle scenes, were produced in the 1st and 2nd centuries A.D. for the embellishment of protective breastplates (baltei) for horses. They usually show mounted Romans depicted as victors juxtaposed with barbarian horsemen either fleeing or in the process of being dismounted. Such scenes also show figures on foot in various positions of combat, wounded or dying as they lie on the ground, or begging mercy from the victors. There is a superb and complete balteus in Aosta [1] with some of its appliques almost completely in the round. Other groups with numerous figures are the ones without their balteus in Velia [2], Torino [3] , and Vienna [4], and the complete example in Brescia [5]. Such baltei have been found primarily in Italy and Central Europe, and they must have been produced in several workshops, the best of which were probably located in Northern Italy.

Our example shows a mounted barbarian in flight, though his expression shows little anguish.