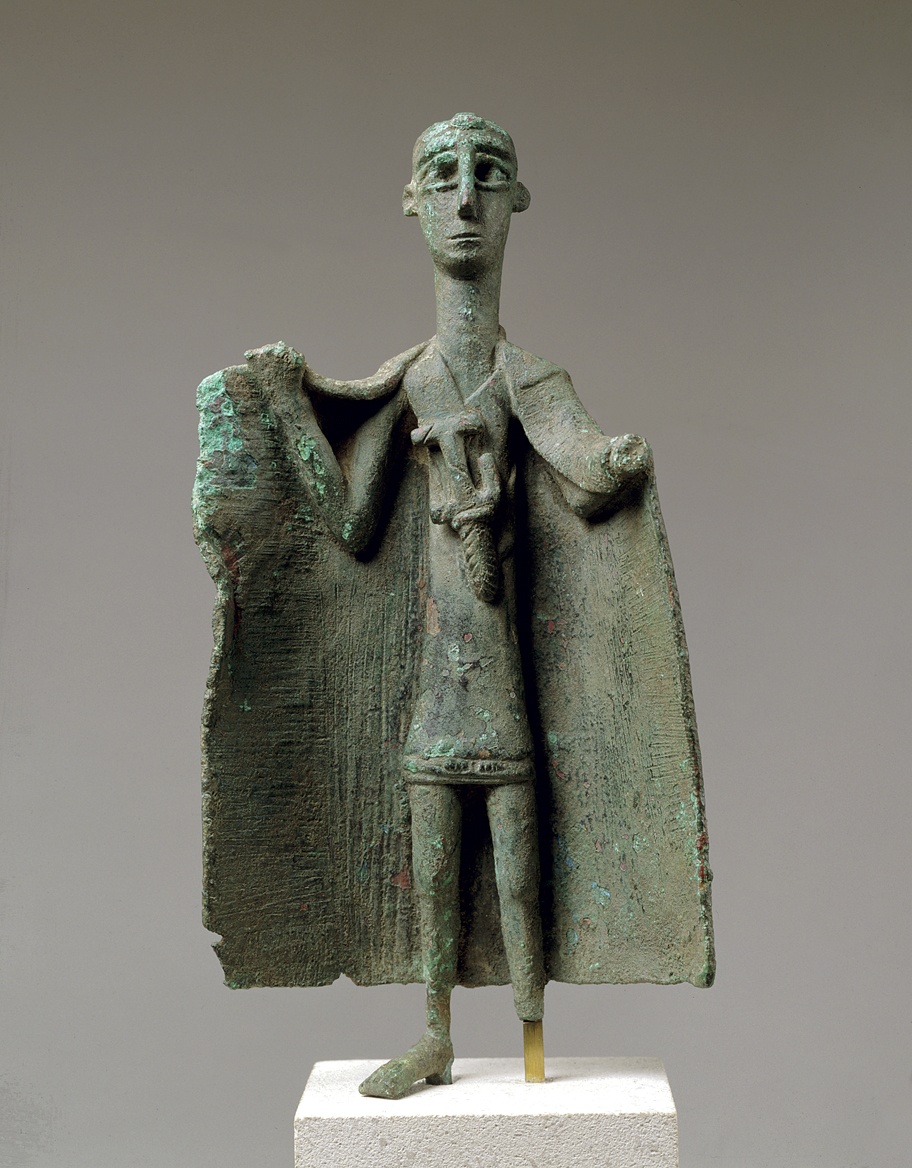 Solid-cast by the lost wax method and summarily [1] worked in the cold. The hollow eyes probably once inlaid.

Condition: the medal colour bronze, where visible, has veered to a purplish-reddish, is almost entirely covered with a green patina and has remains of hardened light to brownish earth. Green cuprous chloride in places. The whole surface presently somewhat rough.

Missing: fingers of the right hand, the left hand with the staff it held as also the left foot (with its long tang [2]) to which it was probably attached.

Such "capitribu" have been variously interpreted as being the representations of a Nuragic prince, a shepherd-king, a tribal chieftain, or simply as chief of the herdsmen, which we prefer. Sardinian society at the time was aristocratic and feudal. We ignore the distinction between the local "prince" and the local religious leader, possibly one and the same. In Sumeria, for instance, with their god-kings, the chief of the herdsmen was also the chief or religious leader, as the clergy owned sacred flocks. Surely this "capotribu", on account of his size and bearing, was at the top of the social hierarchy.

He stands with his right hand raised in a gesture of prayer or adoration in front of a divinity. He wears a small cap probably an attribute of his rank. Slung across his right shoulder and curving around the left side of his torso a large strap holds his slightly curved dagger, a male attribute and symbol of virility.

He wears a shirt hung over his left shoulder and an
undergarment [3] decorated with two tassels and below these there is a double border which might exceptionally indicate a second undergarment. For the undergarment and tassels there is a rapport with the dress of "Syro-Hittite" seated and standing figurines.

Over his shoulders is slung a large mantle made of very thick wool [4] (unwashed and retaining its natural fat).

The present figure belongs to the Uta-Abini group and is from the same workshop [5] that produced, and in all likelihood by the same artist who made, the "Lady with a Hat" (cat. no. 177), allegedly found with him, and the "Donna orante" [6] in Cagliari.

1 A correct assumption if one judges that the irregular horizontal and vertical lines on the inside and outside of the cloak and on its upper folds over the arms were made on the wax; Thimme feels that the striations are the remains of the wax model. Should they be the result of cold chiselling, "summarily" would not apply. Such striations have been interpreted as the fur of an ibex (Jurgeit, F.: Beobachtungen zu einigen sardischen Gewändern, p. 120) or as goats' hair cloth (Lilliu, G.: Sculture della Sardegna nuragica [Verona, 1966], p. 46).

2 Originally probably like the one under the right foot, the filled casting funnel for the molten metal, forked at its lower extremity - probably after cooling - to enable a more secure fixing with lead to the stone base.

3 For a thorough discussion on Sardinian garments see Jurgeit, F: op. cit., where the present statue is discussed.

5 As mentioned to Thimme on 17-18 August 1978 and taken up in the catalogue Kunst Sardiniens.