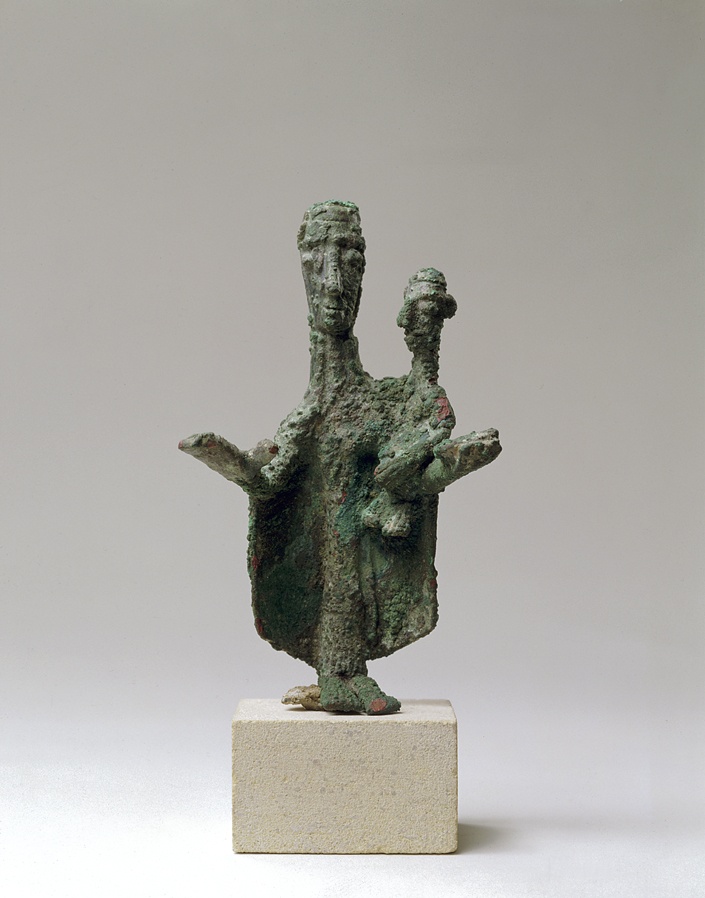 Solid-cast by the lost wax process, cold-worked and burnished.

Condition: patina a grey-green where surface visible, the rest thickly incrusted with cuprous chloride warts and heavy granulation dull to bright green, and splashes of red cuprite [1]. Traces of whitish-grey limestone deposits. The tang under the feet still encased in the lead, presently oxidized, that held the statuette in place on a limestone block [2].

An offerer, she stands, dressed in a linen undergarment protruding below the woollen garment wrapped around her body, its flap end visible as it hangs down her left side. A mantle made of very thick wool [3] (unwashed and retaining its natural fat), hangs over her shoulders fastened at neck level. With her left arm bent she supports her child in the hollow of her elbow. His right arm extends behind his mother's shoulder, his hand at the join of her neck and back, his left hand to his knees. Her left hand, palm up, holds a phiale while her right hand is extended forward, palm down, indicating that she is an offerer.

We concur with Thimme [4] when he compares this figurine with three others for the subject of mother and child asking for a divinity's help, but not with his generalization that the gesture and the sacrificial bowl of the present example induce one to conclude that such representations in Nuragic art depict a mother with a sick child.

However we agree in two instances with his opinion, supported, as he says, by the discovery of two of these representations of mothers with children on their laps from a well-sanctuary at Santa Vittoria di Serri [5], visited by the sick in search of healing, as attested by a statuette found in situ of a shepherd [6] offering his crutch in thanksgiving.

There are notable differences between the four groups. In the case of the two from Santa Vittoria, the child appears sick, his head is leaning back resting on the mother's arm, as she envelops him with it cradling him, her hand ending on the child's thigh. However, the third example, also a mother on a stool with child on lap called "la Madre dell'Ucciso" from Urzulei (Nuoro) [7], is different. Her child is already a young man wearing a beret usually worn by a "capotribu", with his dagger slung across his chest, indications of his rank, maybe a young aristocrat (says Lilliu), confirmed by the bearing of his head held high. He could represent her dead son, since the group was found in a sacred cave associated with chthonian cults, and may be a votive to the Mother Goddess, an intercession in favour of his afterlife. The mother's right forearm is broken and missing but was surely also advanced in a position similar to that of our statuette in a gesture of offering.

It is to be noted that this example is unique for its stance and reminds us of Romanesque Virgins with Child from the Auvergne region of France, though the latter are usually seated and the right arm of the Child is upraised rather than placed over its mother's shoulder. What is similar is the healthy appearance of the child, his head held high.

Thus we prefer the hypothesis that the present statuette represents a mother offering and sacrificing, but whether to thank for her sick child having been healed or for his future or some purpose, such as the safe return of her husband from a warlike expedition, is uncertain.

1 A bunch of bracelets (some broken), since removed, adhered to the statuette and these traces are where they had fused-oxidized to it; a fragment of one of them, a brownish-red, still adheres, visible on the right side of the head.

2 Sardinian votives (e.g. statuettes and long blades) were wont to be grouped on large limestone blocks with holes for their insertion.