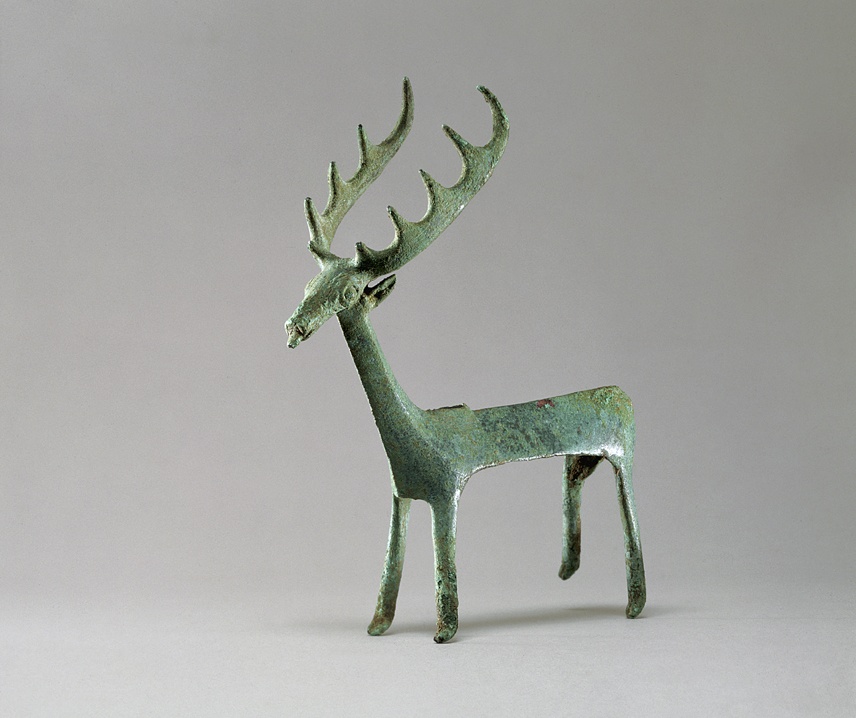 Cast by the lost wax method, polished and worked in the cold. A slit between the shoulders on back to enable mounting.

The front left leg bent outwards, the body slightly contorted resulting in some distortion to the right hind leg. A small gash to the upper inside of right leg and two nicks on rear underside of body.

This stag served as a finial for a votive sword [1]. As such, it not only enhanced the importance of the offering but surely added a note of sacredness and magic to the sword, rendering the offering more ingratiating. Possibly it in part fulfilled a similar function to the Anatolian stag finial, cat. no. 28, though in a different context.

For the style, there is a distant family resemblance to a bull [2] in Cagliari for the body construction, neck and legs and a very distant rapport with two other bulls [3] also in Cagliari. Closer comparisons are the groups of a stag and dog [4] and of double-protome stags (votive finials on the end of long swords), and particularly two [5] in Cagliari, with tongues protruding as on our stag.

Considering the stag's alleged provenance from the southern Villanovan area, he is probably from a Villanovan tomb of the 1st or 2nd Benacci period around the first quarter of the 1st millennium.