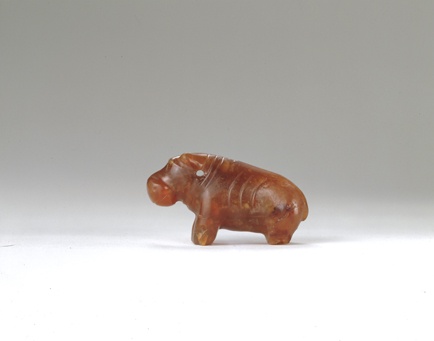 Carved from a piece of amber, drilled, polished and incised.

Condition: surface very slightly weathered with a small chip here and there, particularly to front left and back paws. The inlays for the drilled eyes and for the clover-leaf inset on the forehead missing. A slightly tapering transversal hole below the ears drilled from right to left side, possibly not contemporary. The perpendicular hole on the centre of the back between the shoulders probably made in modern times.

This small sculpture is a problem for its material, the carving of the clover-leaf, other round holes, and its stance.

The hippopotamus native to the Nile, wallowing on its banks, was not only familiar to the Egyptians but a favoured subject appearing on limestone low reliefs of the Old, Middle and New Kingdoms, and reproduced in the round in faience during the Middle Kingdom (see cat. no. 38). However the present figure differs in stance, maybe because of slight damage to the lower front paws and to most of the hind legs which have been filed down since discovery. What is the explanation for the clover-leaf formed by three round drill holes? For this is a technique encountered on early Sumerian limestone sculptures of the beginning of the 3rd millennium B.C. inlaid with lapis lazuli, bitumen or gold; but the hippopotamus is not familiar to the fertile crescent, though it may be depicted in the early 2nd millennium B.C. in the Levant.

In conclusion, this little hippo probably was executed in Egypt during the New Kingdom period, when contacts with the Keftiu from Crete and more particularly the Canaanites from the Levant [1] - these last traders in amber - could explain the presence of a piece of this material [2]

1 After writing this entry, we read the news (Archaeology, Sept. 1991) that discoveries in the great royal palace of Avaris in the Egyptian delta prove strong connections already in the 15th-16th Dynasty between Crete and the northern rulers of the kingdom, the Hyksos (who possibly originally came from the Levant, that part which is now Israel - formerly Palestine - and Lebanon), preceding their destruction by Ahmose in the early 18th Dynasty.

2 It would appear that the Ancient Egyptians sometimes employed resins and possibly amber in lieu of precious and semi-precious stones in the confection of jewellery and amulets. Though unlikely, it is conceivable that this little hippopotamus
is made of resin and not amber. A scientific analysis would be conclusive (Lucas, A.: Ancient Egyptian Materials and Industries <London, 1962>, pp. 386-388).