The Old Kingdom centered in Lower Egypt started dissolving at the end of the 6th Dynasty as local governors became too powerful.

Menthuhetep II towards the end of the 11th Dynasty reunited Upper and Lower Egypt, laying the groundwork for the 12th Dynasty when the administrative centre moved from Thebes to Memphis, close to the Old Kingdom pyramids.

The Middle Kingdom (2050-1750 B.C.) was considered by the Egyptians to be the classical period of their civilization, its apex. Writing in the form of hieroglyphic script, begun around 3000 B.C., achieved formal perfection around 2000 B.C.

Art influenced by the Nile Valley with its ever renewing life cycle reflected time and space. Its artistic standards, with their thematic formality and rigidity of pose, were perfected in centralized royal workshops retaining the same monolithic aesthetic for three millennia. It served to express religious and political truths that represented the immutability of the natural order and embodied universally accepted ideals. There was always an intimate correlation between art and religion. Its supreme virtues were moderation and constancy; its achievement perfect balance and harmony.

Being a representational art, whose function was to illustrate the purpose of present life and after life, its statues were considered as animate beings perpetuating and inseparable from the person represented.

Statuary fulfilled a crucial religious and mortuary role for both king and commoner.

Even before the creation of an organized state, which took place during the Dynastic period (c. 3100 B.C.), sculpture was a means of manifesting royal power. Flourishing and sometimes realistic during the Old Kingdom, the arts add a new dimension to classical perfection during the extraordinarily creative reign of Senusret III (1). Bodies remain totally idealized conforming to type, whereas the faces are realistic and reveal in conjunction with an awareness of self (2) the wear and tear of absolute power. Individual portraiture revealing human character and royal icon are combined in abstract formalism to convey the official mood. In his statues a subtle modeling gives life to his features which express a new realism revealing his energy, his autocratic power undiminished, "... a new way of expressing an unchanging view of divine kingship" (3). The Kings of the Middle Kingdom used art as an effective means of representing sovereignty.

Sculpture of the Middle Kingdom thus achieved its apex under Senusret III and his son Amenemhat III in a culmination of classical measure, a happy mean between the severe realism of the Old Kingdom and the almost manneristic humanism of the New Kingdom. Senusret III became the archetype of the Pharaoh (Herodotus, Diodorus). This period so impressed later dynasties that its sculpture, both royal and civilian, was to be reused and imitated - in the measure that it was possible and appropriate - by future Pharaohs, officials and priests.

During the early Middle Kingdom a major evolution in ideas leads to a secularized and absolute conception of sovereignty embodying considerable realism and individualism (4) in art.

Technical data (5)
Lost wax casting was practiced from the Middle Kingdom onwards. The following figures, cat. nos. 3-37, the bust of Amenemhat III, a statue of him kneeling (6), his consort, and two viziers, form the main body (7) of an unique group executed in this technique. They were solid-cast of copper alloy (8) by the lost wax method, with parts hollow-cast, carefully chased in the cold, incised and polished.

Condition: once heavily incrusted with cuprite and copper carbonate (malachite) (9) as usually produced by sandy desert contexts. The group was first subjected to rapid manual stripping (10) and in a subsequent (11) operation was most carefully and ably cleaned and restored.

The author is indebted to Dietrich Wildung's excellent study of the Middle Kingdom (L'Age d'Or de l'Egypte. Le Moyen Empire [Fribourg, 1984]) from which he has gleaned much information for the entries of this group.
Naturally, he bears full responsibility for all and any mistakes.
(1) Senusret III (1862-1844) who recreates one kingdom centralizing the power that had been enjoyed by provincial governors and is the father of Amenemhat III.
(2) Wildung, D.: op. cit., p. 203.
(3) Bourriau, J.: Pharaohs and Mortals. Egyptian art in the Middle Kingdom (Cambridge, 1988), p. 42.
(4) Wildung, D.: op. cit., p. 17.
(5) Resulting from visual observation only; scientific analysis to be conducted in the future will confirm or invalidate and supply the answer to certain questions.
(6) See cat. no. 37, footnote 3, for his unusual patination and its explanation.
(7) The others are: another figure of the king, standing and solid-cast (Munich, Staatliche Sammlung Ägyptischer
Kunst ÄS 6982), two more high officials (Paris, Louvre E 27153 and Munich, Staatliche Sammlung Ägyptischer
Kunst ÄS 7105), a large wig of a queen (Geneva, private collection), and the figure of a crocodile (Munich,
Staatliche Sammlung Ägyptischer Kunst ÄS 6080), though the appurtenance of this last to the group has been questioned by H.-W. Müller (Eine ungewöhnliche Metallfigur eines blinden ägyptischen Priesters, BAW, Phil.-Hist.
Klasse, Heft 5, 1989, pp. 5-33), and this author has his doubts. D. Wildung states that it unquestionably belongs.
(8) Technical analysis will reveal whether the alloy is natural or induced by human action. This should be by AAS =
Atomic Absorption Spectral Analysis. (Unfortunately several drill holes 1 mm in diameter are necessary for samples.)
(9) Possibly copper chloride (atacamite), analysis will determine.
(10) Carried out in Switzerland.
(11) Work carried out by Anna Plowden on the whole group with exception of the Queen, cat. no. 35, before it entered the Tempelsman collection. 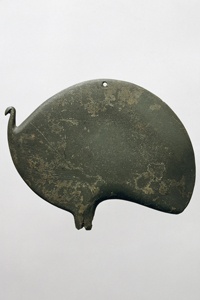 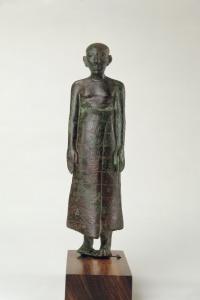 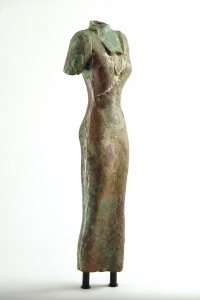 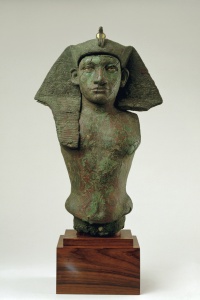 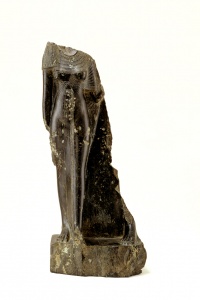 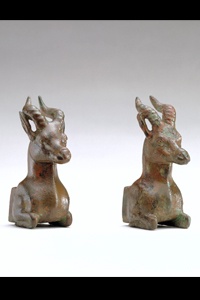 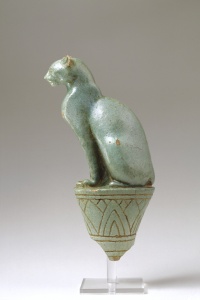