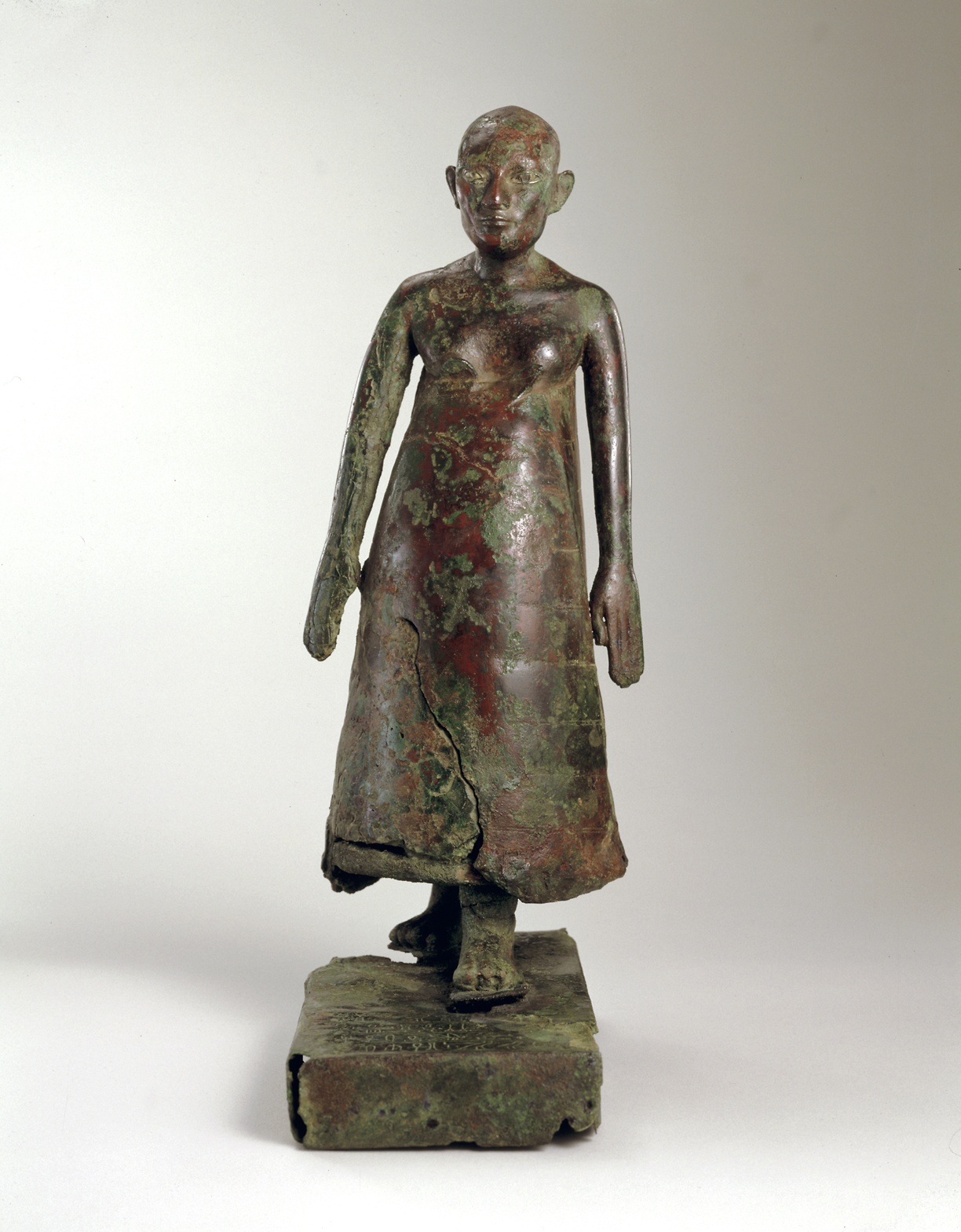 The upper part of the torso and head solid-cast, arms solid-cast separately and probably affixed [1] with rectangular tangs in slots. From the garment down hollow-cast. Fixed below the skirt a plaque of copper alloy (6-10 mm in thickness) solid-cast, into which the lower legs, probably cast separately [2], were inset. Under the feet, tangs inserted the hollow base held in place with nail-plugs still partially extant. The base itself made of metal sheet. The underpart a separate sheet joined to the rest and the hollow space between the two reinforced with four cylindrical sections of metal of about 5 mm in diameter.

Eyes inlaid of polished crystalline limestone (calcite, Egyptian alabaster), the cornea inset of rock crystal - presently with no traces of a pupil underneath, and the outline of the eyes formed by silver or electrum inlay [3].

Condition: the skirt with gaps on the lower left side and a large crack [4] on the front right side. On the right arm the metal is much fissured; most of the thumb missing, the right side under the arm and much of the skirt eroded. The top and back of head slightly eroded, the face and other parts fairly smooth, the plaque and feet with incrustation, the latter shod with flat sandals. Parts of the sheet of the base missing, the front left side section with two smaller pieces on the inside of both sides at the back a modern restoration. Much of the surface uneven and rough, most of the inscription still visible.

He is comparable to his three peers for the canon of traditional forms and for his dress, but different in that he wears sandals. His expressive eyes are inlaid, in the same way as are those of the officials in Paris and Munich, whereas Sen-Usret's are not. His corpulence, whether realistic or not, reveals his well-being but does not attain the proportions of the Munich official. He shares with the latter a certain smugness of expression which stems, D. Wildung says, from their secure position in the service of a consolidated state [5]. However, he is the key figure among the non-royal statuettes. His portrait is extremely personalized with its great projecting ears, prominent cheekbones, its eyes set far apart under barely suggested eyebrows, the whole face lively and fresh. His trunk is also admirably modelled. To quote J. Settgast, he is more "distinct than anything of the kind yet found of a high Egyptian official at the court in the days of King Amenemhat III, radiating experience, intelligence, vivacity - but also a trace of scepticism and mild resignation... without the slightest taint of stylized or idealized embellishment".

An inscription, an integral sacrificial text, reading from right to left on four horizontal lines, was incised by an expert engraver/ calligrapher on the front top of the base. The text reads:

"The King (be gracious) and determine that (the god) Sobek, who lives in Crocodilopolis, might bestow (a death offering of bread and beer, of beeves and fowl,) of linens and fabrics, of incense and oils, of bounties and viands, (for the soul) of the hereditary prince and count, keeper of the seals, sole secretary and chief of the sealers, (Seneb-) su-ma, the reborn, born of Seruch-ib."

The text gives us invaluable information concerning the historical significance and attribution of the whole ensemble within its artistic and religious context. There is a mention of Sobek, the crocodile god, in Crocodilopolis, the principal centre of the Faiyum Oasis. We learn of the subject's name with an important clue to his genealogy, since his mother's name Seruch-ib is given. There are three stelai of the Middle Kingdom in Cairo [6] mentioning a man of this name and matronymic. This identity and genealogical information may allow us to infer that he might be the same person, which, if it were so, would give us the name and occupation of his father and other relatives. However, there are differences that give rise to doubt. But on a stele in London [7] there is Seneb-su-ma with exactly the same array of titles as here but unfortunately no genealogical reference.

Within present knowledge it is impossible to tell whether all these sculptures refer to the same keeper of the seals and chief of the sealers. There are thirty-one known scarabs of a certain "keeper of the seals, sole secretary and chief of the sealers" bearing the same name. The only difference is that the titles "hereditary prince and count" are absent on all the scarabs. In fact the scarabs list all his actual titles whereas the two missing epithets are high honours surely awarded to Seneb-su-ma towards the end of his career. This, in addition to the inscription, indicates that the present portrait shows him towards the end of his life, which is in keeping with some of his features.

We are much indebted to Jürgen Settgast, who very kindly gave us permission to publish the translation he had made of the inscription for private use in October 1983, accompanied by certain comments.

2 The figure probably made in the same fashion as the copper statue of a high official in Munich (see footnote 1), where it is stated: "... feet, base and underside of apron cast separately".

3 As also for the bust of Amenemhat III, cat. no. 36. This is also how the outline of the eyes of the Louvre high official (see footnote 1) is described. However, for the standing king in Munich (Staatliche Sammlung Ägyptischer Kunst ÄS 6982: Schoske, S.: MüJb 3. Folge, vol. XXXIX, 1988, pp. 207-210) the outline of the eyes is stated as being inlaid with electrum, but for the statue of a high official in the same museum (see footnote 1), the eye inlays are said to be of silver. It is to be noted that silver on Egyptian objects is seldom pure since it was used as an alloy with gold and copper; thus without analysis it is difficult to differentiate between silver and electrum (verbal communication A. Giumlia-Mair, 26-27 November 1994).

4 Which probably goes back to the time of casting; for a similar occurrence, see Schoske, S.: loc. cit. (footnote 1).