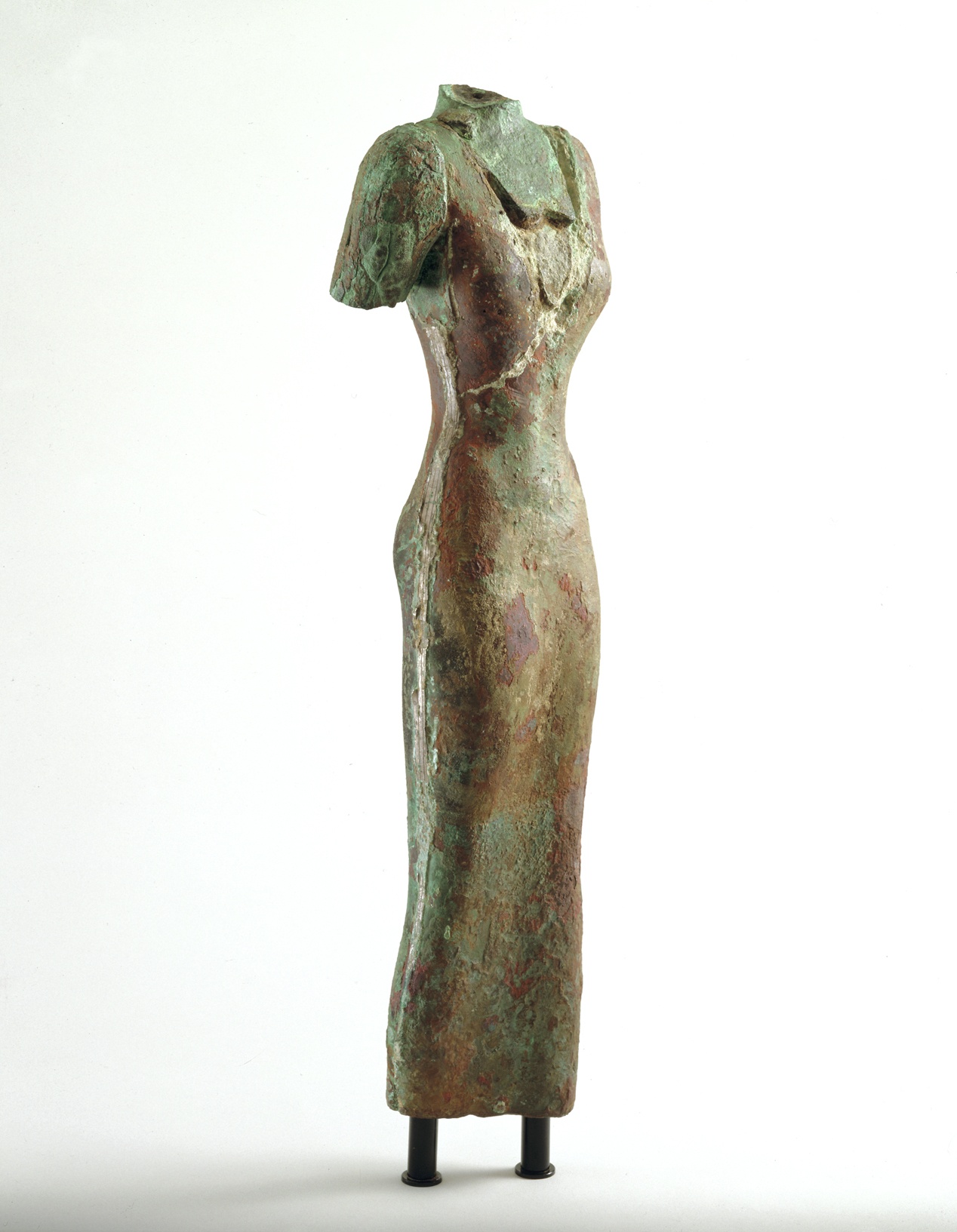 The body solid-cast by the lost wax process. The thick-walled head was hollow- cast in one piece with a deep plastron-like V-section which inserted to form the central part of the upper body.

The whole body once covered with silver sheet evidenced by the long strips down both sides, inserted in a V-shaped slot and held in place with silver rivets. There are silver rivets or the now empty holes they fitted, here and there, over the body. Above the shoulders remains of large rivet-like nails for holding the sheet that covered the body.

A large fissure runs from the sternum to above the right hip - a casting defect. A small near-rectangular patch at the front centre just above the hips - a casting repair.

Condition: the whole surface of the body very much abraded [1], rough and pitted. The missing head broken away unevenly at the lower neck off the plastron-shaped wedge, now out of position. Its lower section jutting forward in front, recessed at the back
and the upper part slightly recessed in front and projecting at the back.

The upper right arm [2] and shoulder still preserved but the position distorted.

Almost all the silver that sheathed the body now missing, save for most of the two longitudinal strips and many of the nails that held it in place. The upper plastron-like central part of the body was covered probably with far thicker sheet and possibly of a different type of precious metal.

The left arm, lower legs with ankles and feet missing.

In all likelihood the Queen would have been placed next to her consort (his surviving bust, cat. no. 36). The sculpture epitomizes the subtlety of modelling, the controlled plasticity and the careful workmanship that characterized Middle Kingdom sculpture at its best. She is incredibly sensitive. Her head was surely covered by a wig as there are no traces of hair on the back of her neck.

An interesting comparison is the ivory figure of a woman in the Louvre [3] which illustrates the elongated canon of feminine figures during the Middle Kingdom. Very similar is the way the bust rises from the narrow waist [4] and the lower body flows down from it, and the shape of the plastron [5]. Similar also is her profile from the waist up especially for the shoulder line. However, the ivory is static and, though she has a slightly curved line for the belly, her buttocks are much flatter, whereas here they are more plastic as they flow down into her thighs giving her a new and added dimension, as without any "déhanchement" she has her left leg forward. The movement starts with her upper left thigh being slightly more forward followed by the back of the leg, her left shoulder is also slightly forward with the right slightly back. This is an unusual position for the right shoulder as, with the left leg forward, it should also be forward, as is usual for Egyptian art of the period. It is an indication that the Queen was surely on the left of her spouse, Amenemhat III, and thus turned slightly towards him.

This incipient expression of movement illustrates, as do also to a lesser extent the viziers (cat. nos. 33, 34), an extraordinary sculptural progress difficult to achieve in stone, but which the lost wax process enabled in bronze. It is a new technology which gave the artisan of the Middle Kingdom a new dimension.

1 Apparently, after discovery, the figure was immersed in a barrel of liquid to strip off the thick incrustation - the result of this unfortunate attempt only too visible here.

2 A fragment comprising the lower section with elbow and upper forearm (outer length: c. 22.3 cm) has not been restored and reattached since the position of the upper arm is distorted and the overall effect would be both misleading and aesthetically unattractive.

4 Exaggerated in the object compared.

5 Which in the parallel has a smooth and undecorated surface indicating that this is her skin.