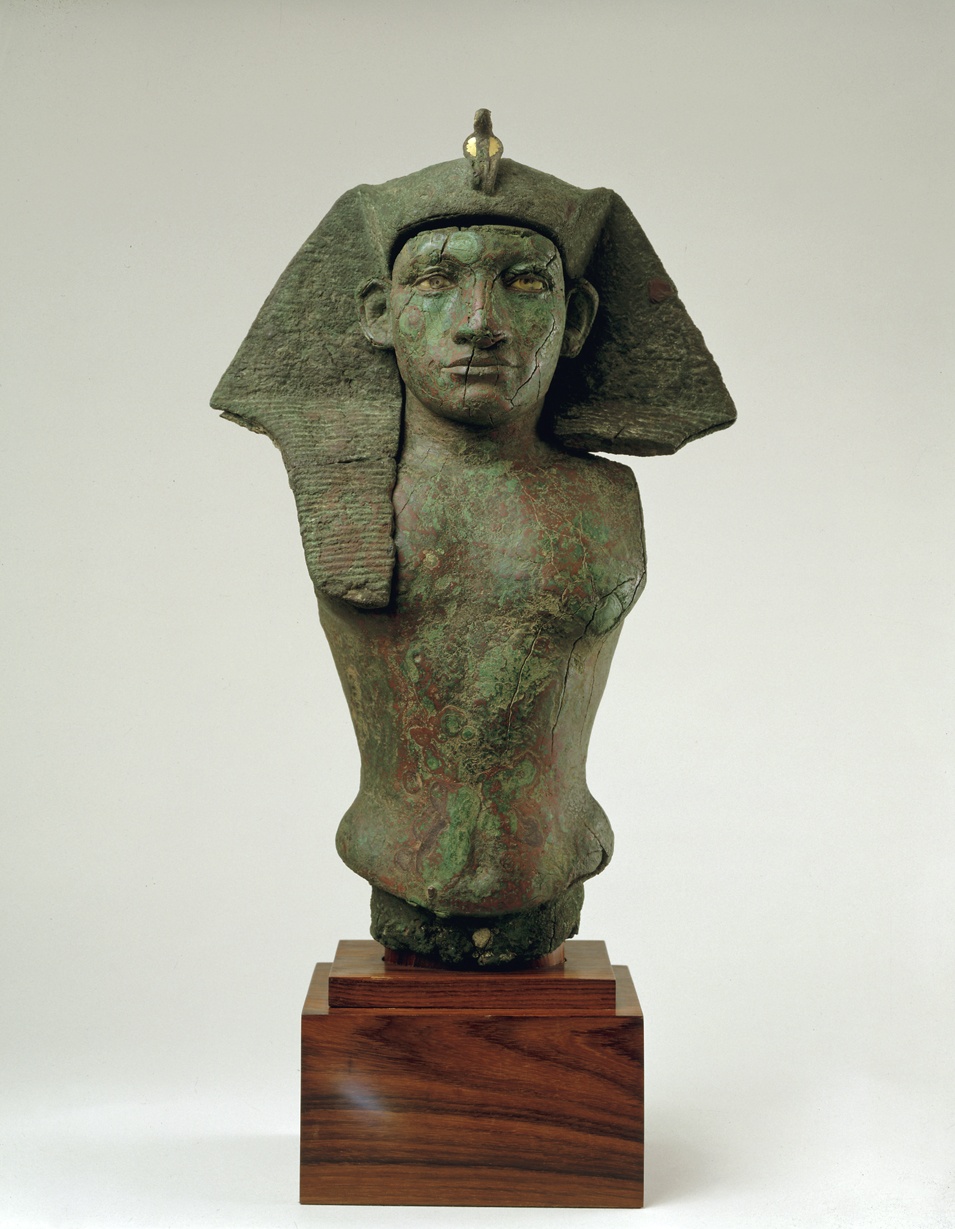 Bust and head hollow-cast together, thick-walled bronze upwards of 1 cm. A recessed thick ring section extending 3.5-4.5 cm below enabled insetting into lower body. The arms, now missing, were cast separately and fixed by means of tangs slotted into longitudinal grooves inset from the shoulders down. The right one broken off, remains still in place.

A recessed rim around the head holds in place the royal headcloth, cast separately by the lost wax process and worked in the cold.

Eyes inlaid, see Seneb-su-ma, cat. no. 34 (for the left eye the rock crystal cornea inset and the pupil underneath missing), with the difference that for the right eye the pupil would appear to be indicated here by a painted black dot [1]. The temples originally inlaid with silver or electrum strips; the right one still in place, its upper half bent outwards. Right nipple still extant, left missing. At lower right of navel a silver rivet-like protuberance and straight above it under the breast a round hole for another rivet, a large protruding silver rivet on the left side of the back halfway between shoulder-blade and waist and on the right remains of a cavity for receiving an identical nail; these surely served to fix a sheet of silver [2] over the bust.

Condition: the head and neck and the upper bust with large fissures, three below the left breast attest the difficulty of casting such a mass of metal at such an early stage of a new technological development.

The circlet is missing that would have hidden the join between the head and the royal headcloth, deeply fissured in places, the lower right lappet broken off and reattached, the lower left one missing. The uraeus cast separately and inlaid with gold; its right cheek with a gold rectangle, the right eye of an indeterminate substance (garnet?) inset in gold; the left eye and cheek inlay missing; the dilated hood below the head once with seven gold inlays, two of quarter moon shape, serrated on the curving edge, still in place.

Great King of the 12th Dynasty, Amenemhat III was responsible for transforming the swamps of the Faiyum into rich cultures.
He built a first pyramid at Dahshur, and then a pyramid at Hawara accompanied by a vast funerary temple. The present group
and all the other pieces belonging to it possibly come from this funerary ensemble, maybe buried in antiquity during the Hyksos period [3].

We are told [4] that from early times royal statues were placed in the temples of the gods. In certain texts the king appears as the central figure and the population's well-being depends on its loyal attitude towards him. Venerating Amenemhat III included a spiritual side as he was the high priest, the only human in contact with the gods [5].

The alleged find-spot would be in keeping since, during the Middle Kingdom, the Pharaoh's protection and patronage was sought for the after life as much as for actual life. Thus the setting for sculptures could be a temple or mortuary temple celebrating the king's cult, but palace or tomb were also possible. It was necessary to be buried close to the royal tomb, which explains the enormous cemetery complexes [6] .

This bust is what remains of what was surely the central figure of the whole group, his consort on his left. The author is unsure as to whether he would have been seated or standing and what the rest of his body would have been made of. If wood, probably acacia since it would have been covered with a sheet of precious metal - gold, silver or electrum. The standing figure of the King [7] from the same group may have been added to it towards the end of his life or slightly thereafter, since "his sunken cheeks and other characteristics represent the traits of an ageing personality". The universal image of an absolute monarch, in appearance untouchable, with his distant dignity, "rarely in Egyptian art has a king been represented so directly and frankly, so revealing in his deep psychology, his personality so little disguised" [8]. He epitomizes the new style of the end of his dynasty with his contained expression of interior life. To look at him is to admire him, he is the greatest of monarchs for though he will suffer no contradiction his presence is promise of protection and well-being in this world and the next.


1 Possibly made from charcoal or ground antimony.

2 Possibly electrum, for silver on Egyptian objects is seldom pure since it was used as an alloy with gold and copper; without analysis it is difficult to differentiate between silver and electrum.

6 Of which the most popular site was the "terrace of the great god" at Abydos, the great
god is Osiris, primeval king of Egypt and ruler of the dead.