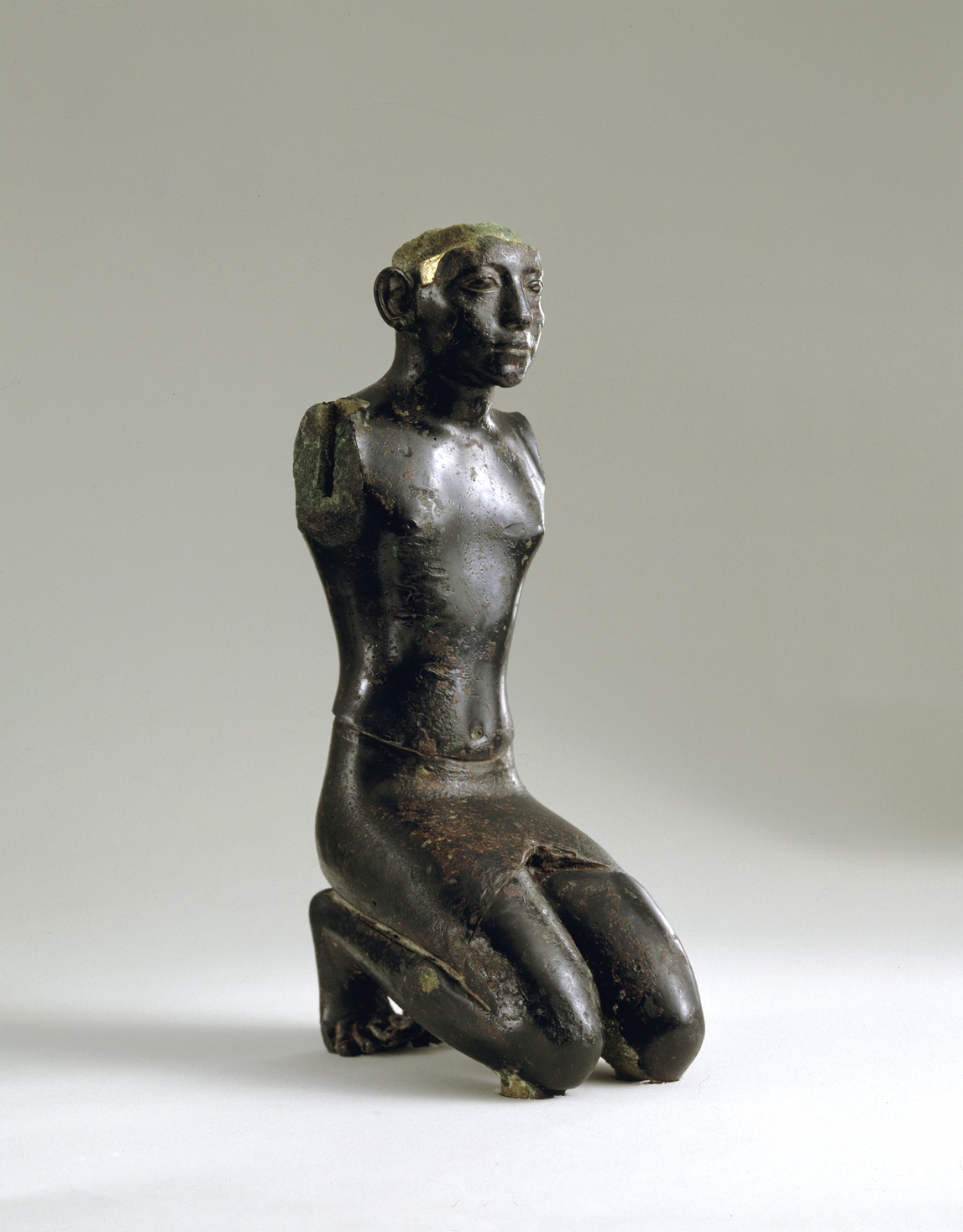 Solid-cast by the lost wax method, four thick tangs project from under the knees and from below the toes for insertion into the stand. The arms, now missing, cast separately and fixed by means of tangs into the longitudinal grooves inset from the shoulders down (see bust of Amenemhat, cat. no. 36). Rising from the crown of the head a recessed rim to enable fixing the royal headcloth, now missing. Gold inlay on both temples. The apron [1] formerly inlaid with silver [2]. A round hole on the upper outer right thigh probably for fixing a rivet, now missing, to hold the apron in place; traces possibly of a now filled hole on the left thigh.

Worthy of note are two round holes above the nipples and a round hole on the upper centre of the back, probably to enable steadying the headcloth by its two front lappets and its central plait down the back.

Just above the knees on the inner thighs two small round holes face each other, 2 cm apart. In view of the superlative polish and black patina of the head, torso, legs and feet, it is certain that these parts were not sheathed with any precious metal. This writer does not think that the two holes related to the casting process, thus their purpose remains open to question.

Condition: cleaned manually, revealing a superbly polished original mirror-like surface of a shiny silvery black [3] sheen. Abraded and with blows here and there. The left eye damaged as well as the cheek; blows to the chin, centre of mouth and tip of nose; the right nipple smashed flat. Both small toes sliced off. The inside of the shoulder slots, the recessed rim on the crown of the head, the tangs and the surface between and inside the lower legs uncleaned. Most of the tang under the right foot broken off in antiquity and missing.

The most salient physical characteristic of Amenemhat III is his elephant-like ears. On this statue they are very similar to those of his head on the bust (cat. no. 36), though here they are clearly visible since his headcloth is missing. His gaze is extraordinary as he looks out towards the distant outer world of the gods to whom he must be making an offering. Unlike the expression that emanates from his rock crystal eyes (cat. no. 36), which is a manifest projection of absolute power, here as high priest he officiates to a power greater than himself. His arms were possibly extended in offering maybe holding vessels, as for instance in a later figure of a king [4] in Berlin. This latter figure would also seem to explain the two little holes mentioned above on the inner thighs, as they may have served to fix a lappet that hung below his apron.

The finish and fluid sensitivity of the body, typical of the closed forms and attention to surface of Egyptian sculpture, is a sheer glory, a sublime expression of Middle Kingdom art.

Clayton, P.A.: Chronicle of the Pharaohs. The Reign-by-Reign Record of the Rulers and Dynasties of Ancient Egypt (London, 1994), p. 6 ill.

2 A trace of which is still visible slightly left and below his belly-button on the recessed part. It would seem that the Egyptians did not always differentiate between gold and silver which they "evidently regarded as two forms of the same mineral, distinguished only by colour, referring to the latter as 'white gold'" (Harris, J.R.: Lexicographical Studies in Ancient Egyptian Minerals <Berlin, 1961>, p. 41). It was comparatively rare and was considered more valuable than gold, several times its value, until the end of the Middle Kingdom (Lucas, A., Harris, J.R.: Ancient Egyptian Materials and Industries <4th ed. London, 1962>, pp. 246-248). Silver on Egyptian objects is seldom pure since it was used as an alloy with gold and copper; without analysis it is difficult to differentiate between silver and electrum.

3 Purple black patina is attested in Egypt since the 18th Dynasty, called hmty km, known afterwards as the famous Corinthian bronze (aes), and later in Japan as shakudo. In Egypt it results from the metallurgical use of a copper alloy with the addition of a little silver (about 1%) and gold (1-2 %) followed by a surface treatment (iosis). In Japan the percentages vary and the treatment is done using an aqueous solution containing various substances, e.g. verdigris, copper sulphate, alum, or some sulphur and arsenic minerals. Though one cannot determine visually whether we have here hmty km, its use for this King officiating as a high priest would be highly appropriate since this material was essentially employed for ritual objects and is thought to have been produced mainly in temple workshops. See Giumlia-Mair, A.R., Craddock, P.T.: Corinthium aes. Das schwarze Gold der Alchimisten, Antike Welt, 24. Jg., Sondernummer 1993; id.: Hsmn-Km, Corinthian bronze, shakudo: black-patinated bronze in the ancient world, in: La Niece, S., Craddock, P. (ed.): Metal Plating and Patination. Cultural, Technical and Historical Developments (London, 1993), pp. 101-127; id.: Irogane Alloys in Classical Antiquity, Bulletin of the Metals Museum, vol. 20, November, 1993-II, pp. 3-17.