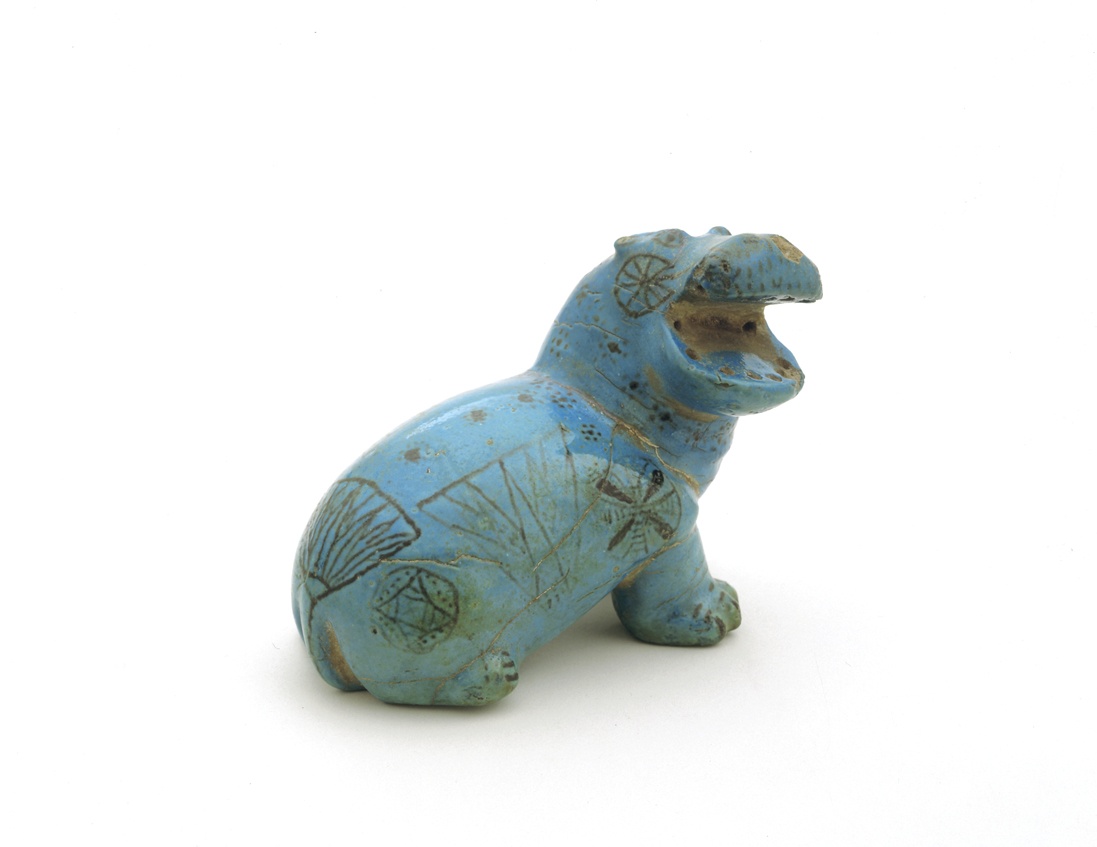 Fashioned from sandy earth, glazed and fired. The glaze a turquoise colour with painted decoration in manganese violet: lotus flowers, leaves, rosettes and a dragonfly [1] - characteristics of his environment.

Condition: broken in 2 pieces and restored. The glaze nicked on the right ear, chipped on the left side of the snout, on a section of the left lower jaw and on the small toe of the left forepaw; the front legs broken off and reattached, a slice of the lower left hind paw missing. Missing the teeth, probably of ivory, that were inserted in holes prepared for that purpose.

Whether or not such representations gave pleasure to the Ancients as they do to us, hippopotami were both feared as well as revered. Terrifying by their volume and size, destructive of the river banks and the nearby fertile fields which they both trampled and laid waste with their gluttony, they were hunted by the Ancient Egyptians. They were thus an enemy and often considered as an expression of negative forces (dedicated to Seth, the Evil One). Illustrated on the walls of Old Kingdom tombs, the hippopotamus, incarnating chaos, a permanent menace to both the earthly and divine world, is often shown about to be put to death by the owner of the tomb. This symbolic act expresses the deceased's contribution to securing harmony in the universe. However, the fattier females symbolizing fertility and rebirth were worshipped as propitious to human survival and fulfilled an amuletic function during childbirth. It has even been suggested that their colour represented the primeval waters from which the world was created, and the lotus, which closes at night and opens in the morning, another symbol of rebirth. Because of their great protective power, they were sometimes placed inside the coffin of the deceased [2].

1 Of the fifty to sixty surviving examples of faience hippopotami there are only five represented with their head turned and this is the only one which figures a dragonfly.