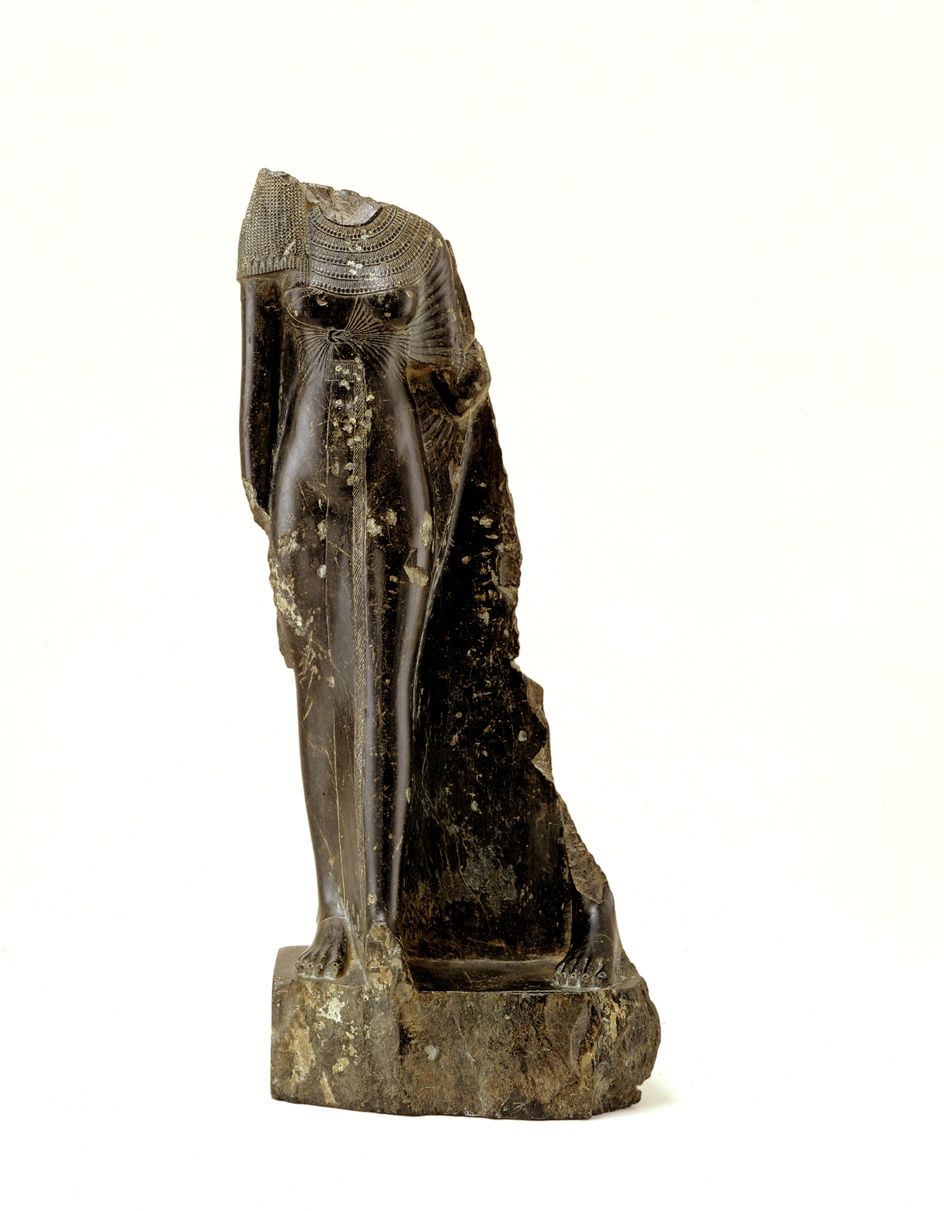 Sculpted, incised, inscribed and polished from a block of serpentinite, a type of serpentine.

Condition: missing the head of Isis, both wrists and hands, the front of her left foot and all of the Pharaoh Amenhotep but for his right foot. Also missing roughly half of the inscription in hieroglyphs which covered three columns (possibly four, though unlikely). Chipped and fissured.

Part of a royal group [1] that represented Amenhotep III [2] with Princess Isis qualified in the inscription as his daughter and consort.

The sensitive fluidity of the ensemble, its wealth of refined detail, its finish and polish attest the high quality of sculpture during his reign, the forerunner of Akhenaton's artistic developments.

Isis seems to have been his favourite of the four princesses known as the royal daughters by his great consort, Queen Tiy. Each was also his concubine for a short while.

The inscription [3] at the back not only bears witness to the relationship between art and language in Ancient Egypt, where the one is as important as the other, but describes Isis not only as daughter of the king but also with the title "king's wife". It confirms the date and what remains of her wig, the way it is executed with its particular locks over the right shoulder, is representative of the formal hairstyle for princesses of the time of Amenhotep III and IV, characteristic of fashion at the end of the 18th Dynasty and appropriate for solemn occasions.

In commanding the present group, it may be that, beyond fulfilling the Pharaoh's whim and honouring his favourite daughter, the representation of the short-term union of father and daughter was justified by the political expediency of dynastic continuity [4]. However, more likely, the sculpture was made in conjunction with the Pharaoh's first sed festival [5], indicated by the inscription referring to him as: "Strong Bull who appears at the sed festivals", and his figuring with Isis, his daughter and concubine, symbol of youth and life, and the colour of the material used, a blackish-green, associated with "agricultural renewal" [6].

1 Though Princess Isis's right foot is behind and her left slightly forward of the Pharaoh's right foot, his left foot was certainly ahead of hers; thus as it ought to be, the king stood forward in the pre-eminent position. We do not believe that the great queen Tiy, her mother, was part of the group making up a triad, because the inscription mentions "king's wife Isis may she endure".

2 From his father Tuthmosis IV he inherited an empire at its zenith; though he participated in great hunts and implemented during his reign a programme of self-glorification, his neglect of military action, which diplomacy could not make up for, left free rein to the expansion of Hittite influence. Nonetheless he was a great Pharaoh, builder and patron of the arts, to whom bear witness monuments in the Theban necropolis, the great temple at Luxor dedicated to Amun, the colossi of Karnak and his palace-city near Medinet Habu.

3 Column 1: "Live the Horus, Strong Bull who appears at the sed festivals, the King of Upper and Lower Egypt, Nebmaatre, the King's daughter Isis, may she live!". Column 2: " (4-5 groups missing) the son of (Re Amenhotep Ruler of Thebes), King's wife Isis, may she endure!". Inscription as it appears in the catalogue for the exhibition Egypt's Dazzling Sun: Amenhotep III and His World, of which the entry kindly supplied to us by its author Betsy M. Bryan before final editing (October 1991). The text conforms save for the addition of "Live" with its interpretation by B. van de Walle.

5 Within this hypothesis, though, C. Vandersleyen would seem to prefer the second or third sed festival.