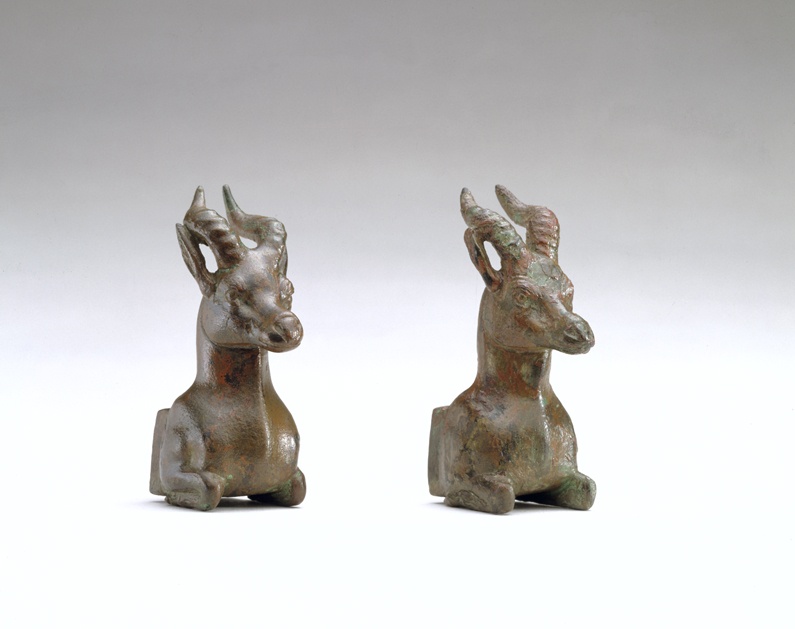 Hollow-cast by the lost wax process, cold-worked and polished.

a: the surface similar in colour to its pair, but far smoother and hardly damaged by the aggressive cleaning to remove the incrustation. The details fairly sharp and clear.

b: traces of incrustation on rear lower section of left horn. The present surface partly smooth and partly abraded with remains of incrustation - a mottled texture of greenish black, brownish red, red and green.

The protomes are of the dorcas gazelle, a small antelope, common to North Africa, Arabia and the Near East. Square sockets at the back served to fix them as adornment to a chair or possibly a vase. Many of their features conform to the style [2]
of the late 18th Dynasty: the undulating volumes, the broad forehead, the rounded profile of the back of head and neck, the slightly almond-shaped eyes with lids a series of multiple lines, the interaction of the ears and horns.

Comparisons are to be found on Theban tomb reliefs and paintings as well as on examples of painted terracotta plastic head vases of the Amarna period.

There is a rapport for the general feel with two faience antelope heads dated 15th-14th century B.C., possibly fragments from a vessel, of comparable size in St. Petersburg [3]; what remains of their horns is identical. Other comparisons, especially close for their sensitive heads, are in the Metropolitan Museum: a bronze weight [4], ascribed to the 18th-20th Dynasty and dated c. 1400-1100 B.C., though the ears are slightly different, and a gazelle [5] in ivory and wood attributed to the 18th Dynasty, c. 1355 B.C., though both ears and horns are missing.

The protomes exude a strong Cretan influence, their spiritedness reminds us of mountain goats in Cretan art [6]. There were Keftiu (Cretan) artists working at the court of Amenhotep III in Egypt;
at the time interrelations between Crete and Egypt were considerable as new discoveries will certainly confirm [7]. Metal vases were exported from Crete to Egypt and Egyptian objects are found in Cretan tombs.

2 As told us by Robert S. Bianchi.

7 After writing this entry, we read the news (Archaeology, September 1991) that Minoan frescoes, one of which shows a bull-jumper, had been discovered in the great royal palace of Avaris in the Egyptian delta. Thus we would already have political "and possibly religious connections between Early Minoan Crete and Old Kingdom Egypt", which indicates that interrelations between them go further back and were of a stronger nature than previously thought. However, in the above quote, "Old Kingdom" is surely a mistake as the period in question is probably the 15th-16th Dynasty.