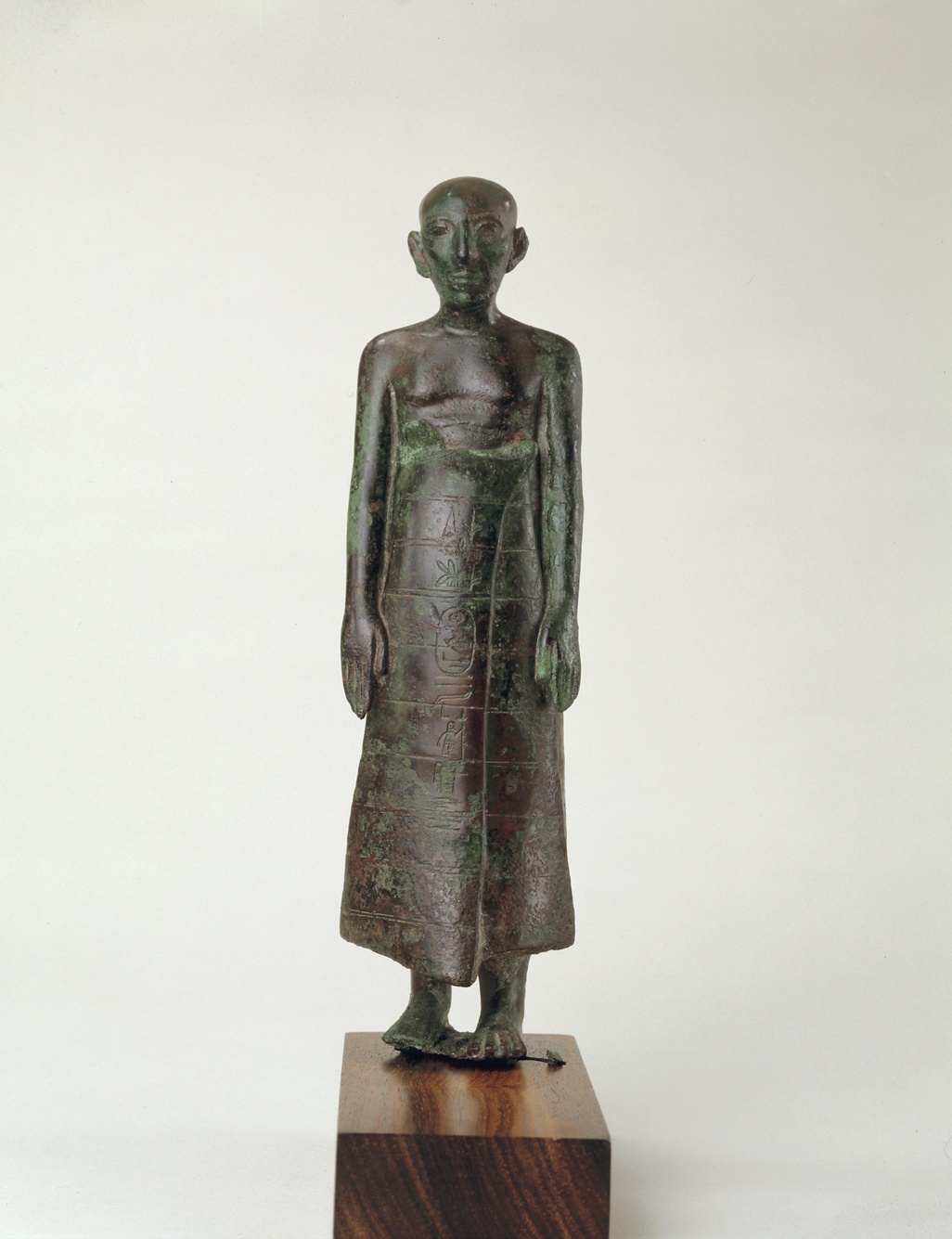 Solid-cast, probably with a core [1] for the lower part of the figure. Originally mounted on a rectangular hollow stand as for Seneb-su-ma, cat. no. 34.

Condition: roughly half of the underside of the statuette retains the thick incrustation that covered the whole figure before cleaning, as do the tangs under the feet, each pierced with a round hole still retaining the remains of the nail-plug that served to fix the statue on its base. The lower half of the skirt at the back, and to a lesser extent in the front, slightly eroded. The rest of the surface is smooth.

Four high officials are known to belong to the original group, among whom the viziers Sen-Usret and Seneb-su-ma. Viziers were the highest court officials of the Pharaoh to whom they were directly responsible. The chief vizier, tjaty in Egyptian, was the foremost executive. He was known as "the will of the master, the ears and the eyes of the sovereign", he was also "wisest among the wise" and was in control of the whole bureaucratic apparatus [2]. As such and in view of their high office, their statues could be placed alongside royal sculpture inside sacred precincts.

Realism and individualism in art, showing diversity of features, are not only applicable to Senusret III and Amenemhat III, but also [3] to representations of private individuals. This vizier and Seneb-su-ma with the other two high officials are such examples; their portraits give us an insight to their personalities.

Sen-Usret like his three peers is dressed in an apron wound above the waist and knotted below the right breast which hangs to his ankles, with its outer edge on the left side dropping below the hemline; the position of the outer edge varies slightly on the other three. These details are typical for aprons of the later Middle Kingdom [4]. The apron is marked with horizontal double lines probably indicating it was composed of strips of cloth
sewn together.

Like his peers he once stood fixed on a hollow rectangular stand of copper alloy, as shown by the remains under his feet, with left foot and leg slightly forward (a position taken over much later from Egyptian sculpture by the Greeks for their kouroi), and his arms and hands are lowered in a gesture of submission. He is unshod as are the Paris and Munich examples.

Emerging from the formal construction of the figure is the personalized and realistically shaped head with, in this case, the rather dour look of an older man of considerable experience.

Running down the front of his apron an inscription, unusually abridged to fit the available space, reads: "The King be gracious and determine that the King of Upper and Lower Egypt Ni-Maat-Re (Amenemhat III) (bestow offerings) for the grand steward of the household Sen-Usret".

The formula is somewhat unusual in that there is no mention of the god's name and the function of patron is instead assigned
to the king himself, but whether a more extended version of the sacrificial formula appeared on the missing base is a matter
of speculation.

We are much indebted to Jürgen Settgast, who very kindly gave us permission to publish the translation he had made of the inscription for private use in October 1983, accompanied by certain comments.

3 Wildung, D.: L'Age d'Or de l'Egypte. Le Moyen Empire (Fribourg, 1984), text to fig. 188 ff. A different interpretation is expressed by J. Bourriau: "If we are entitled to apply the word 'portrait' to royal sculptures of Senusret III and Amenemhat III, can we also apply it to the statuary of private individuals of the late XIIth Dynasty? In my view, with some exceptions the answer must be 'no'." (Pharaohs and Mortals. Egyptian Art in the Middle Kingdom <Cambridge, 1988>, p 39).