The Bronze Age, evolving out of the preceding Chalcolithic period, is a fascinating moment of evolution with important economic and social changes as metallurgy develops, while stone implements are still being used and made.

Mining expands with ensuing contacts and commercialization; fire is mastered and a new class of metalworkers emerges. Most of the production is composed of tools and weapons such as celts, axes, spearheads, daggers and swords; personal ornaments such as bracelets, fibulas, torques are also made in considerable quantity.

Parallel with the above, gold was sought after and beautifully fashioned, in part to answer the demands of a new warrior aristocracy.

The Bronze Age smith was particularly sensitive to line and form as exemplified by his production. We are fortunate in having here two superlatively successful examples, one in gold and one in bronze.

The chronology of this period is somewhat in flux and arbitrary, though many dates are based on sound contexts from excavation. The divisions between the Early, Middle and Late Bronze Age differ according to countries and schools of thought. Thus, we have adopted the French chronological table by R. Joffroy for the gold armlet (cat. no. 70) and the Hungarian one for the bronze arm-guard (cat. no. 71). 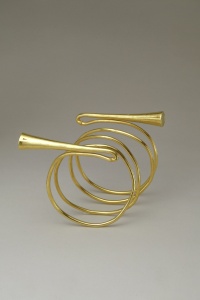 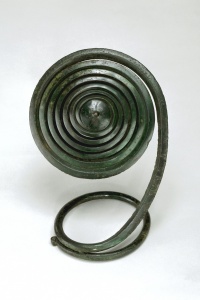