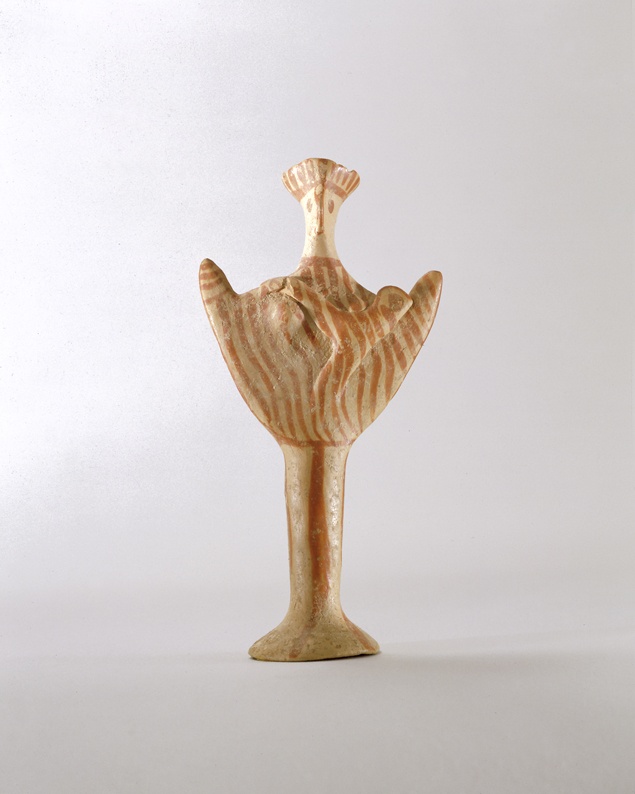 Painted decoration in red of undulating and linear strips and short strokes on her polos and tress.

The purpose of these clay objects, whether they be Kourotrophoi, figurines, thrones or animals is uncertain. Since they were found all over settlements: in tombs, mostly children's (in which case they probably represent toys), and the larger figures with cylindrical bodies in cult contexts, etc., we may surmise that their function depended on their ultimate use.

It is also most likely that the Mycenaeans gave religious meaning [1] to the objects that accompanied the deceased in their tombs.

A rare type (only two other complete examples known). The mother is PSI-type, i.e. with both arms upraised; her child hanging on her breast, not held. The bird-like face surmounted by a concave-topped polos behind which hangs a long tress. Her tubular body flares at the foot.

It is generally thought that the PSI-type is a goddess, evolving from Minoan cult figures. The PHI-type is thought to be a nurse, and it may be that the upraised arms of our figurine are simply the consequence of the combination of one popular form with a less appropriate function - holding a child.

Exhibited and Published:
Odyssey of an Art Collector, no. 8, p. 8 ill.