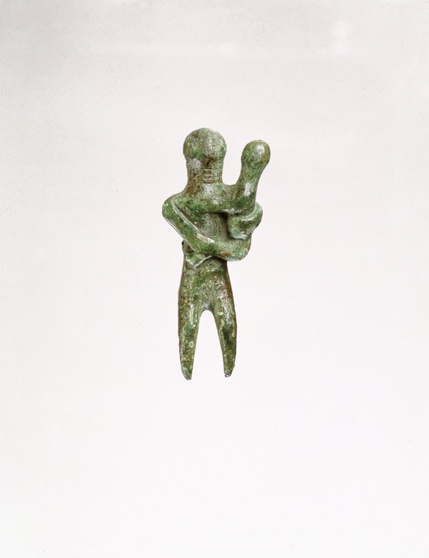 Solid-cast by the lost wax process with a few details added in the cold.

Condition: the lower part of the head pierced from side to side for suspension. On top of the head a smaller hole which has no purpose and which originally may have been begun to serve as a mode of suspension. Somewhat weathered; emerald green patina with traces of metal coming through on the left leg and, to a lesser extent, on the right leg where scraped.

This pendant or amulet is unique and poses problems, since there are no valid comparisons; we know of no bronze statuettes from the Cyclades from the end of the 2nd millennium B.C. There is, however, some similarity with Mycenaean terracottas of the Late Helladic period (1400-1150 B.C.): for instance, the terracotta statuette of a Kourotrophos seated on a throne in the Louvre[1], its legs apart as on our example, and bearing a choker indicated by parallel painted lines, where our bronze has the lines engraved. Mycenaean heads usually have pointed faces, though round heads are found.

However, foremost is the similarity with the plasticity of the arms of Mycenaean terracotta Kourotrophos statuettes, and the way the child is held or applied to the bosom of the mother, as though the arms and other parts were strips of wax; one can almost feel the wet clay being applied. See the terracotta Kourotrophos with two babies from Mycenae [2] and this catalogue no. 63.

In the case of the bronze there are differences, which point to a more advanced evolution, such as the fingers on the mother's left hand (for a Mycenaean comparison, see a female idol with her right hand holding her breast [3], the left foot of the child and a greater feeling for three-dimensional volume, in addition to which there are differences due to the medium.

The likeliest placing for our pendant with its Mycenaean reminiscences is in a transitional period between Mycenaean and Geometric.

As to the region where it was made, it could be the Greek mainland, the Cyclades, or Crete.