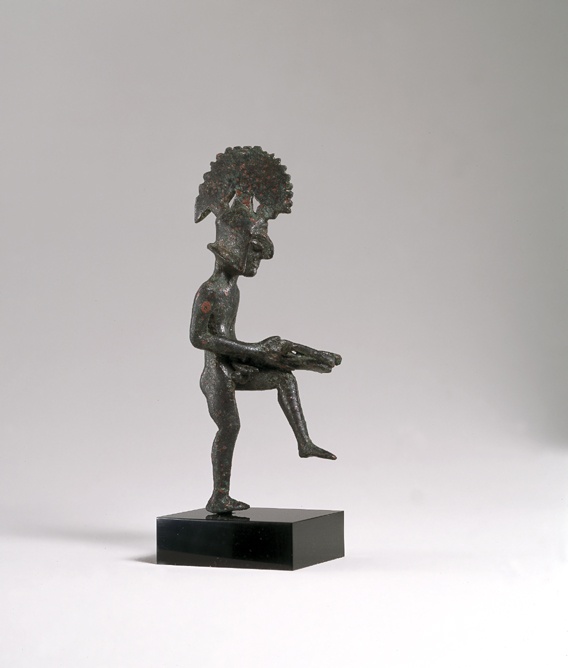 Solid-cast with some cold-working and polished.

A few of the teeth on the top edge of the serrated helmet crest somewhat abraded. Point of missile broken away.

This bowman is naked but his head is covered with a helmet surmounted by an unusual saw-toothed crest. His left foot is raised to help him balance his bow with his left hand as his right arms it with an arrow.

He is unique and his style is original. Thessaly comes to mind and there is a very distant rapport with a bronze horseman in Copenhagen [1], also with a curious though different helmet, and the jutting out penis, but probably this similarity is one of provincialism, in relation to the anecdotic character of the representation. He belongs to a group of late Geometric bronzes from Thessaly which are probably to be dated in the very early 7th century B.C.

Our bowman could seem to be a distant echo of lead cut-outs from the sanctuary of Artemis Orthia in Sparta. For example, for their attitude and spirit, bowmen with one knee to ground about to shoot their upright bows [2]; but for the position of his legs a telling comparison is a figure [3] playing a flute.

We know of no valid comparison and the above suggestions are merely an attempt to find related material. The line of his nose is reminiscent of Phoenicia but is to be found on certain Iberian bronzes.

L. Prados [4], with whom we corresponded, knows of no similar crested helmet on an Iberian statuette nor of such a bow, save for one on a recently studied statuette in a New York private collection. However, it is to be noted that there are Iberian figurines with identical but uncrested helmets and that others have their legs outlined in the same way. There is a similarity with the warrior on horseback from Mojente in the Archaeological Museum of Valencia.

Iberian votives can be full of imagination as shown by this statuette, an example of some of the multiple currents that influenced Spain at that time and found their expression sometimes charmingly in local work with its provincial touch.

4 Letter dated 27 March 1990, where she adds that most Iberian votives are static and that his movement, possibly a dance, can be found on some painted Iberian pottery.