Almost all known examples come from sanctuaries in South and South-East Spain. The most important are the great cave and hill sanctuary of Despenaperros and the cave sanctuary of Castellar de Santisteban, both at the foot of the Sierra Morena in the province of Jaen. From them have come over six thousand figurines.

There are also dozens of minor sanctuaries and innumerable chance finds. By far the most important of the smaller of these is the one of La Luz near the modern town of Murcia with less than two hundred figurines. Unlike the two main sites, it is man-made, having neither cave nor source. The votives are later in date and correspond to the Hellenistic and Roman periods.

Most of all the known ex-votos were found scattered around the caves or lying outside, the first some three hundred years ago. It is only since the beginning of this century that archaeological excavations have taken place. The dating is still problematic and extends anywhere from the 6th century B.C. to the 2nd century A.D., with the greater output probably belonging between the 5th and the 2nd centuries B.C.

The statuettes themselves are not cult images but represent the offerers in their costumes and with their attributes. The best and most detailed would seem to be the earlier examples, the simpler more filiform types belonging to the Roman period. The unusual statuettes often reveal, directly or indirectly, different influences, whether from one or several of the following: the Ionian coast of East Greece, Phoenician Syria and Lebanon, Cyprus, Crete, Greece proper, Magna Graecia and Sicily, Etruria, Sardinia and Carthage. However, most of the production is purely indigenous. 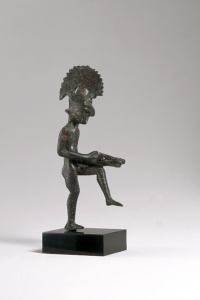 201. Veiled Worshipper
First half of the 5th century B.C. 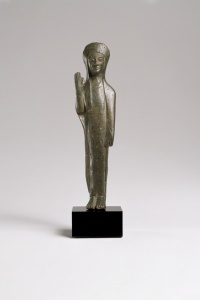 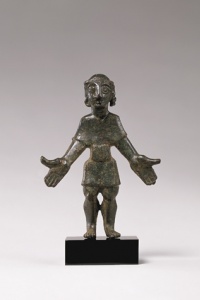 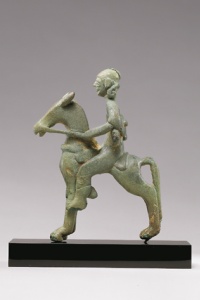 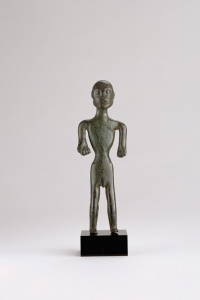