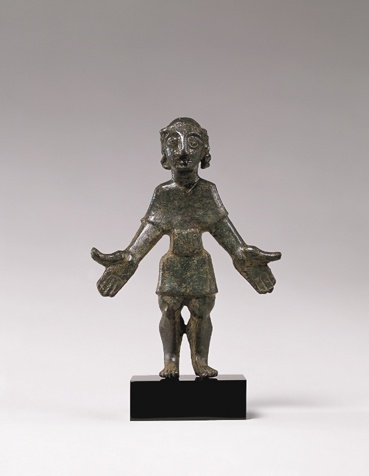 Solid-cast, carefully worked in the cold and burnished.

Condition: patina olive green with a few spots of red cuprite and some brown earth deposit.

A small dent to tip of nose and right thumb bent upwards.

A true votive and beautifully worked, he stands with arms lowered, palms open in a gesture of offering and worship, giving himself up to the divinity. He is clothed in a tunic, with a V opening at the neck, which ends above his elbows and knees held in at the waist with a huge quadrangular belt clasp. If his right thumb had not been slightly bent up, an accident of time, he would be of a symmetrical perfection and execution unusual for Iberian work, though he is typically an indigenous work.

The workshop that made him produced other munecos (puppets), as Iberian votives are popularly called in Spain: similar votives [1] , the worshippers' hands outstretched, an identical belt clasp decorated with circular rivets on all four corners, warriors with right hand in same position, holding a spear in left hand [2], and a horseman [3]. They are similar for the way their eyes are made, for the shape and character of their faces, their little caps, their hair falling in a ringlet on either side behind the ears.

Since all the comparisons in the National Archaeological Museum come from the sanctuary of Despenaperros and the one in R. Lantier in all likelihood also, our statuette is surely to be ascribed to the same sanctuary.