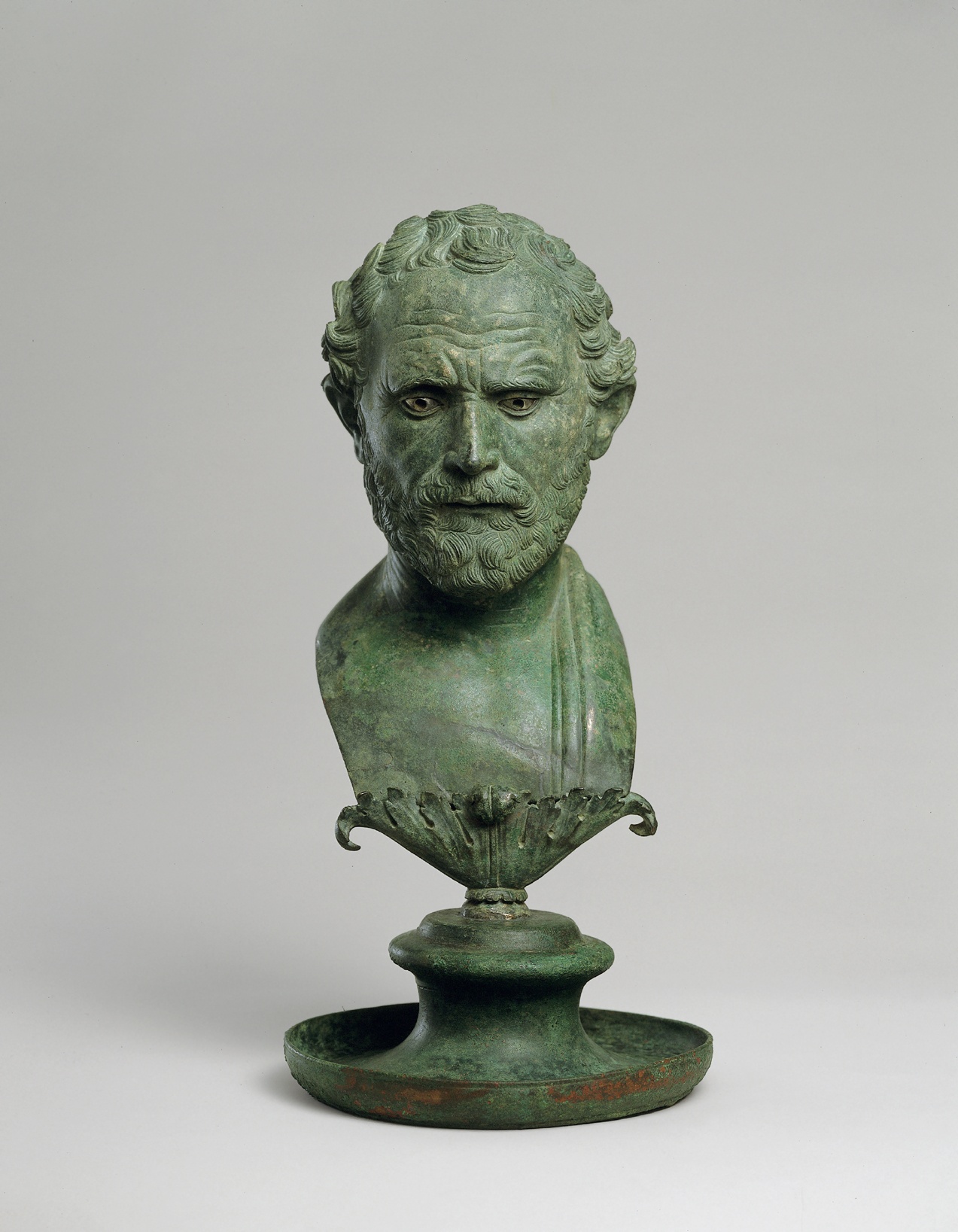 The head hollow-cast, very carefully and extensively cold-worked. The eyeballs of silver, the irises formerly inlaid. The bust cast separately, joined to the head by fusion-welding, cold-worked and extensively burnished and polished. The acanthus leaf cast, hammered and cold-worked. The present base, a forged element, probably the top section of a lamp stand [1], here upside down.

Condition: patina a bright green to blackish olive green, most of it a greyish green with traces of earth and limestone deposits. The surface a sandy to smooth texture. Traces of cuprite and green chloride, the odd spot revealing the copper-coloured metal. The lower section of the bust slightly bent out of shape and restored, the tang under the acanthus leaf repositioned in base.

All portraits of Demosthenes hark back to the bronze statue by the artist Polyeuktos that was erected in the Athenian Agora around 280 B.C., where it stood until Roman times. Demosthenes (c. 384-322 B.C.), the Athenian politician and orator, gained great fame for his passionate speeches against Philip II of Macedon and in defence of the independence of Athens. Born to a wealthy and privileged land-owning family, he became an orphan at a young age and was almost totally dispossessed by his tutors. Though he had a stutter, he taught himself to speak in public, overcoming his handicap by training with pebbles in his mouth, so tradition tells us. He developed great character in adversity, and Plutarch says he had an "embittered and hard character, great severity of expression." He was probably unjustly accused of taking bribes from Harpalos, governor of Babylon, and condemned to pay an enormous fine. He left Athens but was recalled from exile after the death of Alexander the Great to rally the fight against Macedon. Unfortunately, the Athenians were defeated at Krannon, and Demosthenes was condemned to death. He fled to the island of Kalaureia, found refuge in the temple of Poseidon, and took poison to avoid capture.

A great patriot and orator, he was especially highly regarded in Roman times, when he was considered a model for the study of rhetoric. The more than fifty surviving portraits from this period attest to his fame. Popular in the late 1st century B.C., his portrait appeared on ringstones, among which is a notable gem by the artist Dioskourides, the court engraver of the Emperor Augustus [2]. Cicero even tells us in one of his orations (Orat. 110) that Brutus kept a bronze bust of him in his villa at Tusculum.

There is also a bronze bust in Naples [3] inscribed with his name, but artistically it is poor, somewhat crude, and little reflects his character. For a better comparison, though the nose is a modern restoration, both for the expression and particularly the hair, there is a marble herm in Munich [4]. Stylistically our bust may be his finest surviving portrait, and the detailing of the hair and beard and the ethos which his face exudes, incline us to think that he may belong to the Hadrianic period, probably made by a Greek artist.

1 The acanthus leaf and base are not original to the bust though they are an ancient repair, for stylistic reasons contemporary or nearly contemporary (a decade or two). Busts terminating in an almost straight line were usually mounted on circular bases such as those found in Naples: e.g. busts of Zenon 5468, Epikouros 5465, Hermarchos 5466 and Demosthenes 5467 (Richter, G.M.A.: The Portraits of the Greeks II <London, 1965>, figs. 1086-1088, 1175-1177, 1291-1293, 1438-1440). Busts mounted on acanthus leaves seem always to end in a curve (Jucker, H.: Das Bildnis im Blätterkelch <Olten, 1961>, e.g. bust of Domitian, Ny Carlsberg Glyptotek 768, pl. 15 B5). A further indication is a rivet on the lower right hand corner of the bust, slightly protruding at the back and broken, which would have served to fix the bust on a projection from a circular base.

Traces of soldering in the groove of the acanthus leaf and on the edge of the bust confirm a mounting in antiquity, the bulbous tang under the acanthus was inserted into the present base with lead, and to this end the present upper section of the base was adapted in antiquity. To place correctly, the two elements have been detached in modern times and repositioned.