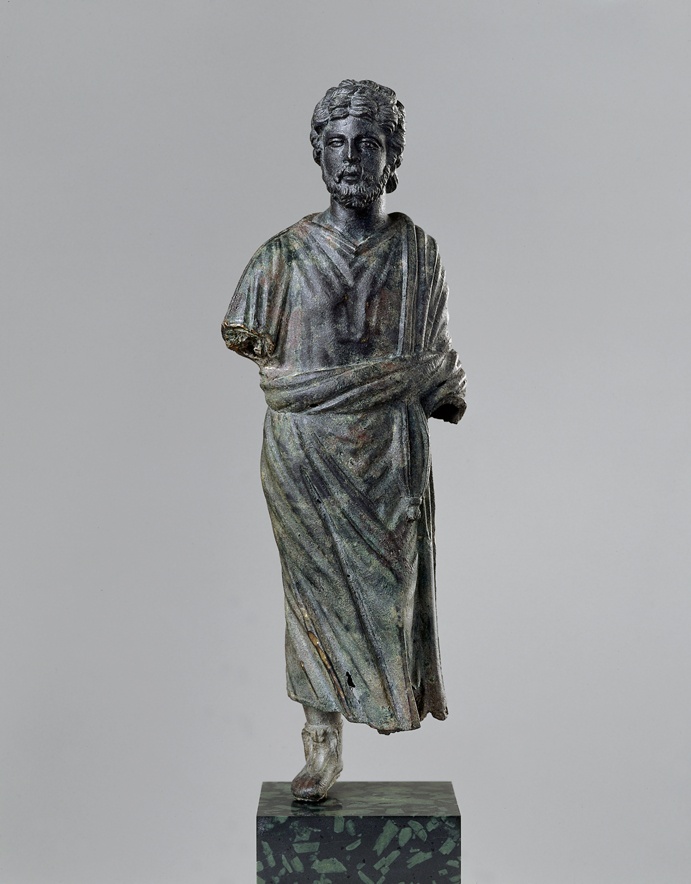 Hollow-cast by the lost wax process; the feet and probably the arms cast separately and fusion-welded beneath the pallium. Cold-worked, but without repairing the casting faults, burnished and polished.

Condition: patina greyish (a slight yellowish hue) to blackish green, the bronze metal visible in a few places in particular on a long scrape on the outside left fold of the pallium. Spots of reddish to claret-coloured cuprite and bornite (?) [1], the surface at present granular.

Missing: the right arm from slightly above the elbow, the left from below the elbow, and the left foot broken off beneath the hemline of the pallium. The middle of his chest slightly dented. The odd rough-edged holes are casting faults. A heart-shaped section missing on the outside of the pallium, probably a fusion-welding defect when inserting the left leg.

He is dressed in a short sleeved chiton and himation, draped around his waist, one end with tassels hanging down on his left side. His feet are shod in low boots. Though the representation is rare for the period, both his dress and his spiritual face suggest a philosopher. However, it is difficult to find a comparison, for he is an original of the period rather than the usual version of a Greek prototype.

We are impressed by this idealized portrait of a philosopher, where the attention is drawn to the face by its rendering and the flat simplicity of the himation over the chest.